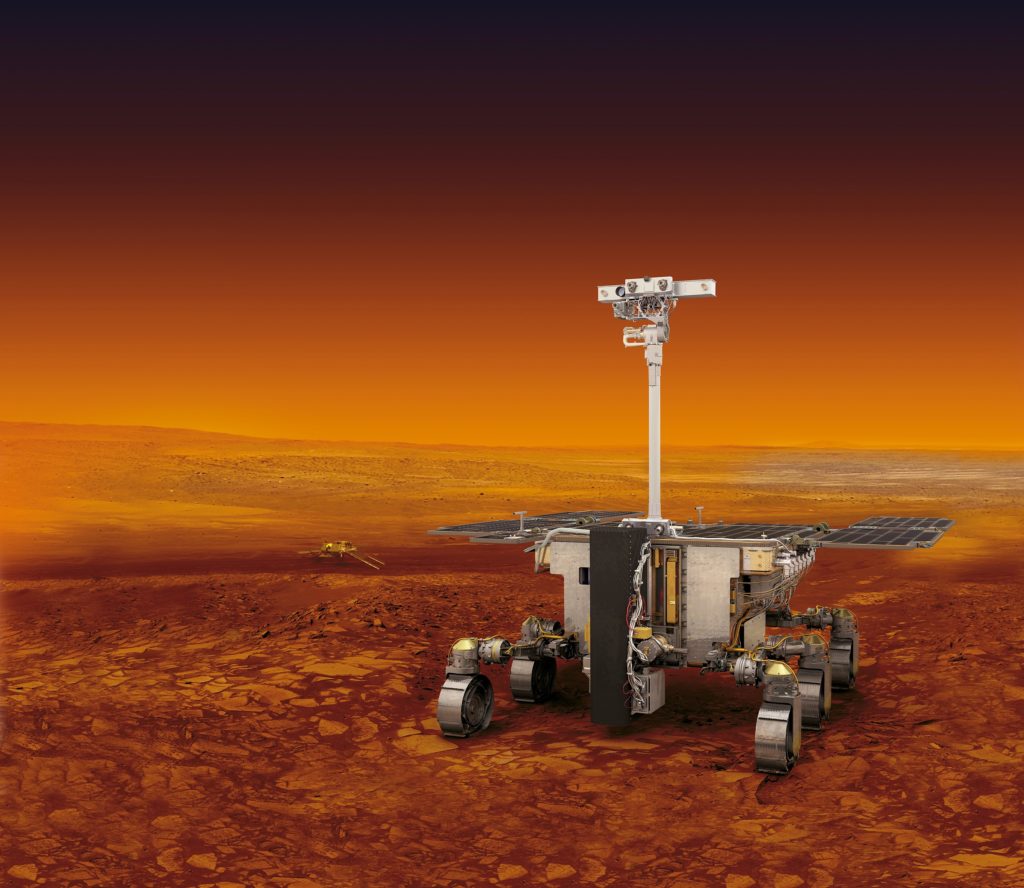 The ExoMars Rover is supposed to search for biological activities on Mars after landing. The camera system is mounted on a 2-m high mast.

In 2020, mankind is heading back to Mars, with the ExoMars Rover, developed by the European Space Agency. The vehicle will be equipped with nine scientific instruments, including one that will be mounted on a two-meter mast on the neighboring planet. Developed by the British Mullard Space Science Laboratory (MSSL), the Panoramic Camera will take stereo images of the planet.

Called Pancam for short, the camera features a rotating filter system in front of its lenses that enables it to take three-dimensional images of panoramic landscapes, close-up structures, and detailed soil samples at various wavelengths. Stepper motors from Faulhaber drive the rotation shaft for the filter change system. Needless to say, requirements for equipment planned for use on Mars are so stringent that nothing quite compares to them.

If the mission for 2020 goes according to plan, the rover will start searching the surface of Mars for past or present biological activity as soon as it lands. This will require not only obtaining soil samples with a core drill, but also performing analyses with an extensive science package.

Meanwhile, the ExoMars Trace Gas Orbiter will stay in orbit, in order to help the rover phone home and ensure that the data and measurement results it collects can make it back home.

The panoramic camera consists of two wide-angle cameras, in front of which a rotating wheel with different filters is mounted. This allows three-dimensional, 300-degree-wide panoramic shots. Another high-resolution camera provides additional detail shots.

Improved images and protection from dust
The ambient conditions on Mars require for every single piece of equipment to deliver unrivalled performance. For starters, the rover will be working under an atmospheric pressure of 0.00636 bar, which is equivalent to the pressure found at an altitude of 35 km on Earth. And to push the envelope even further, the planet is characterized by temperature fluctuations that go from just under 20° to -120° C.

Additionally, the dust kicked up by the rover is expected to have a negative effect on the operational reliability of its high-precision measuring and analysis instrumentation, which is one of the reasons why the Panoramic Camera will be suspended two meters above the ground on its mast. 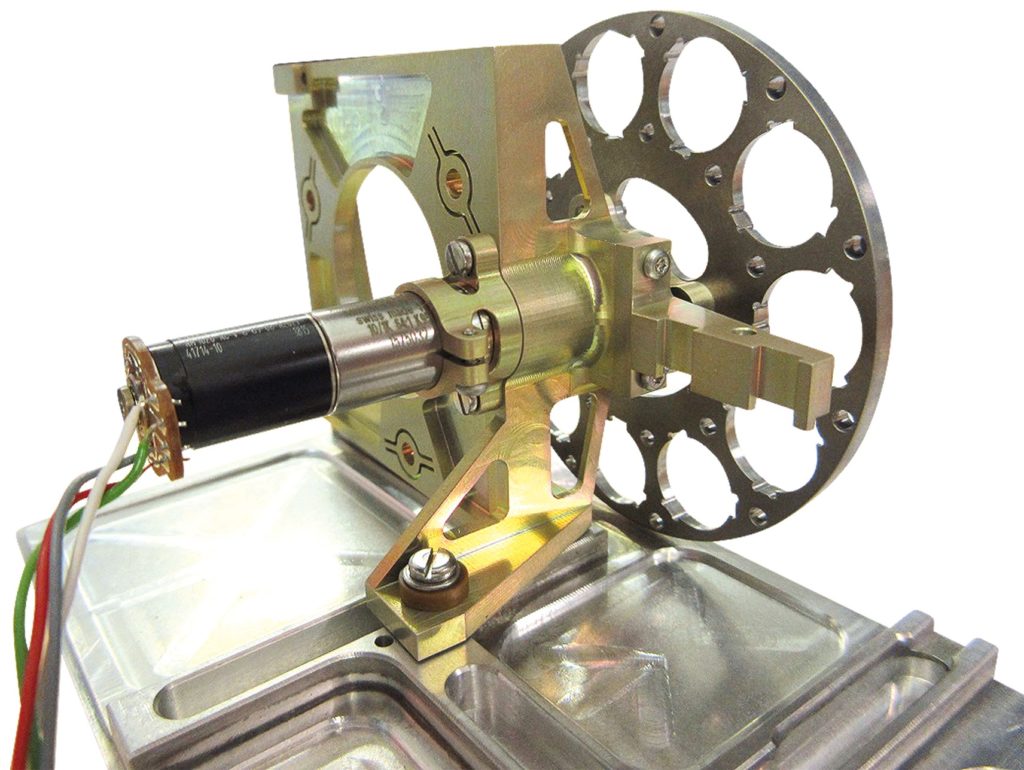 The filter wheel rotates in front of the two wide angle cameras. For sharp images, the lens filters must be positioned exactly.

“This will, of course, protect the lenses, but there’s another important advantage in that kind of elevated position … that’s the fact that we’ll be able to get significantly better panoramic images,” said Jonathan Jones, a mechanical and thermal engineer at the Mullard Space Science Laboratory, south of London.

While its dimensions of 7 x 5 x 6 cm mean that the Pancam is just as small as an action camera, it also features two lenses that provide it with stereoscopic photography capabilities. In addition, with the filters in front of these lenses, MSSL has managed to create a system that will be able to take pictures at various wavelengths during the mission scheduled for 2020 and use them to generate images with varying content.

“The plan is to send ten images to Earth every day,” said Jones.

While that may not sound impressive, a closer look reveals that this is actually quite an ambitious target. For starters, the camera would generate three pictures for a single image, and these pictures would then need to be superimposed on top of each other and sent to Earth. And then there are the limitations imposed by the low data bandwidth available with radio communications between the two planets, which simply makes it impossible to send more than ten images per day.

Stepper motors position lens filters
With its 11 filters, it is possible for the Pancam to take a wide variety of pictures under various light conditions. These filters rotate in front of the two lenses — and must be brought exactly into position in order to obtain sharp images. For driving the rotating filter system, MSSL makes use of two stepper motors from the Faulhaber PRECIstep port. These two units have been passing the endurance tests currently being conducted on them with flying colors.

Stepper motors adapted to the harshness of the Martian surface drive the rotation axes of the filter wheels and the focusing system of the high-resolution camera.

During the development process for the camera, British aerospace experts looked for motors that would not only be able to deliver reliable and precise positioning performance, but that would also be extremely compact. Stepper motors were the natural choice given these requirements. They are able to precisely position objects with a resolution of 1280 steps per revolution without the need for a separate feedback system — and are also much sturdier and easier to use that conventional servomotors. Moreover, the stepper motors in the Faulhaber PRECIstep series are able to exactly follow an externally applied field without requiring time-consuming and complex adjustments.

“It is the perfect solution for optical applications, as it can hold the lens position even without current thanks to its residual torque. Moreover, the control in open loop allows to get rid of jittering effects and therefore obtain very sharp and clear images,” said Sébastien Vaneberg, who works as a Sales Manager at Faulhaber Precistep SA. This Swiss company, which is part of the Faulhaber Group, specializes in miniature stepper motors. “In short, it features a simple electronic system with outstanding availability.”

In the camera of the Mars Rover, each drive has a diameter of just 10 mm. The stepper motor counts 20 steps per revolution and is combined with a precision gearhead of the same diameter with a gear ratio of 64:1. On top of this, the company worked closely together with MSSL in order to further customize the engineering behind its two drives so that they would meet the required specification posed by its use on Mars’ surface. The resulting changes include, for instance, a dry lubricated and custom sintered bearings.

In order to ensure that nothing will be left to chance after the landing, the Mullard Space Science Laboratory is currently testing the components in the Panoramic Camera in a testing environment. The test conditions are even harsher than those on Mars. The positioning drives must complete 5,000 positioning cycles — with temperatures oscillating between -130° and 50° C.

“The test is still ongoing, but the motors are really showing what they’re made of,” said Jones.

During the development of the drives, there was nothing else on the market that could come even close to the Faulhaber units. Not to mention the fact that the company was already a go-to partner for the European Space Agency (ESA), which, together with the Russian Roscosmos space agency, is responsible for getting the ExoMars project to its launch pad by 2020.

A heavy-duty design, wide speed range, and high-power density with a powerful torque are just some of the characteristics that made PRECIstep AM1020 drives the right choice to lift off to Mars. Not to mention, of course, the fact that the simple position control made possible by stepper motors will enable the Pancam rotating filter system to reliably carry out its positioning tasks regardless of how tough operating conditions get.