An artist’s interpretation of the Block I configuration of NASA’s Space Launch System. (Image: NASA)

The critical design review (CDR) for NASA’s Space Launch System (SLS) has been completed, making it the first human-rated rocket from the agency to pass all steps of the review in nearly 40 years.

SLS is the first integrated launch vehicle ever intended to hold up through a trip to Mars and also the first exploration class rocket since the Saturn V, which the agency used as part of the Apollo program during the 1960’s and 1970’s. Once completed “SLS will be the most powerful rocket ever built”, NASA said in its Oct. 22 press release announcing the launch. The system will head to space with NASA’s Orion spacecraft.

NASA has already completed the first round of examination for the vehicle’s engines and boosters, and is currently manufacturing all of the key components for the system’s first flight, according to Bill Hill, deputy associate administrator of NASA’ Exploration Systems Development Division. “There have been challenges, and there will be more ahead, but this review gives us confidence that we are on the right track for the first flight of SLS and using it to extend permanent human presence into deep space,” Hill added.

The purpose of CDR was to give the agency one last opportunity to survey the design and development before the full-scale fabrication phase is started. During the process the SLS block 1 was inspected. The block, which is the first of three configurations designed for the vehicle, will be pushed by twin boosters and four RS-25 engines, and will have a lift capability of at least 77 tons. 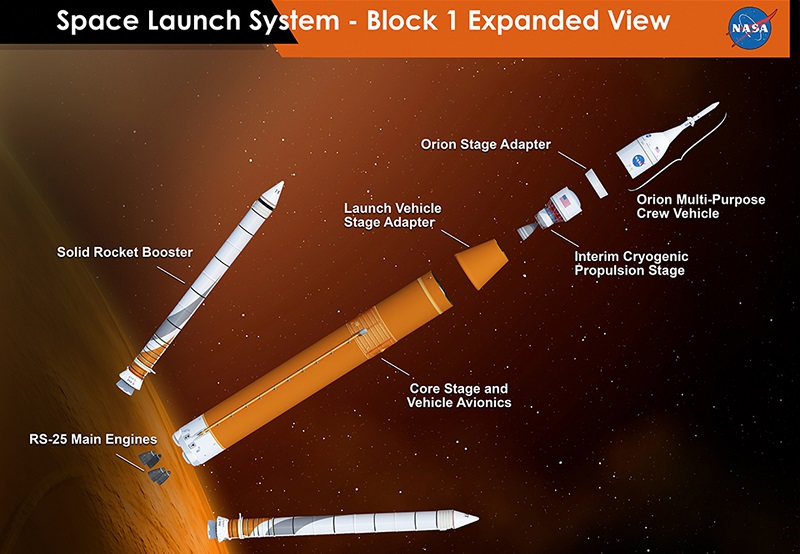 Displayed are all of the parts which will be featured in SLS’ Block 1. (Image: NASA/MSFC)

For the next upgrade of SLS, NASA will improve Block 1B, which is expected to have a powerful stage which is favorable for “more ambitious missions,” according to the agency. Block 1B will have a 115 ton lift capacity. The third configuration, Block 2, will give the rocket two solid or liquid propellant boosters. Block 2’s lift capability is expected to be 143 tons. The same core stage and RS-25 engines will be used for all three configurations.

During the CDR, those involved with the SLS program determined that the rocket’s core stage and the Launch Vehicle Stage adapter will not be painted white, and will instead remain orange. The 200 foot tall stage will be used to carry the RS-25 engines’ cryogenic liquid hydrogen and liquid oxygen fuel. NASA recently finished the first developmental test series on the engines.

CDR was the last of four reviews used to examine concepts and designs. The design reviews of SLS elements of the core stage, boosters, and engines were completed as part of the recent milestone, according to NASA.

NASA said its SLS program completed the review in July, in combination with another assessment conducted by the Standing Review Board, which is comprised of experts from NASA and the space industry. As part of the process, workers spent 11 weeks reviewing more than 1,000 SLS documents and more than 150 GB of data. The board also studied the assessment program’s readiness, concluding that everything was on target to finish the system development and to adhere to the standards on schedule and within the budget. For the final phase of the CDR process, the results of the review were shared this month with the Agency Program Management Council, which is headed by NASA Associate Administrator Robert Lightfoot.

“This is a major step in the design and readiness of SLS,” said John Honeycutt, SLS program manager. “Our team has worked extremely hard, and we are moving forward with building this rocket. We are qualifying hardware, building structural test articles, and making real progress.”

With the CDR finished, NASA will now focus on design certification, which is slated to begin in 2017 following the completion of manufacturing, integration, and testing efforts. The purpose of conducting the certification is to equate the finalized product with the design of the rocket. After the certification, NASA will conduct its final examination, the flight readiness review, before the 2018 readiness date.