High performance motion detection technology is critical as the ‘eyes’ of advanced robotic systems for applications including factory management and autonomous machines in home environments. Traditional robot vision devices such as CCD cameras integrated with microelectronic circuits rely on sophisticated algorithms for high speed imaging and processing for robotic navigation. However, these systems are expensive to implement and require specialists for maintenance when equipment malfunctions.

With a view to producing low cost and simpler systems, scientists are considering bio-inspired approaches in the form of light sensitive bacteria. Specially, bacteriorhodopsin (bR)—a pigment found in the membrane of Halobacteria—that when exposed to light releases protons thereby generating transient electrical currents.

Now, Yoshiko Okada-Shudo at the University of Electro-Communications, Tokyo, and colleagues, have developed a single photocell using bR pigment. The researchers coated an indium tin oxide glass plate with bR solution that was covered in an electrolyte solution to enhance electrical currents and held in place by a spacer plate. The currents generated when this photocell was irradiated with light were measured with an oscilloscope.

Notably, the direction and speed of light scanned over the photocell could be determined using this simple device. Furthermore, when different kinds of patterned “masks” were introduced between the bR sensor and scanned light, each edge of the pattern caused an asymmetry in the current generated. This asymmetry was indicative of the direction of motion of light. Triangular patterns could be used for bidirectional motion, while a combination of two rectangles showed four directions (up, down, right and left).

This simple bR device is promising for the development of simple motion sensors without requiring complex algorithms. This research also has potential for gestural manipulation as a means to control such devices, thereby giving an alternative for touch sensors. 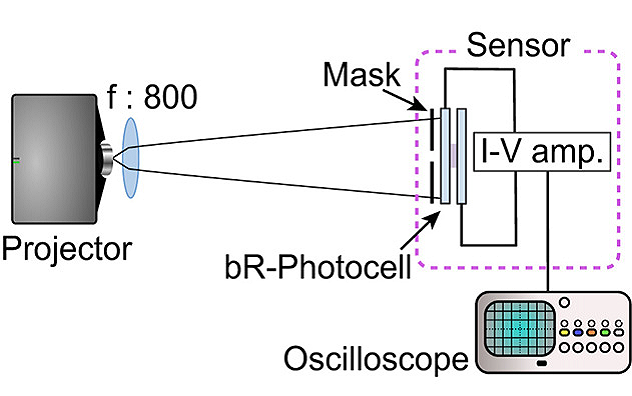