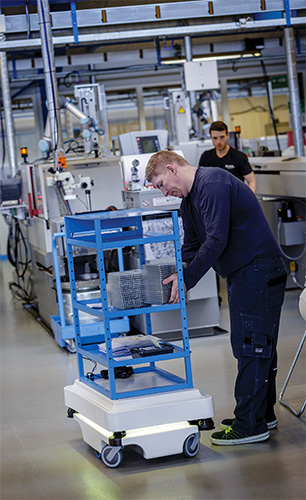 Elos Medtech Pinol in Gørløse, Denmark, is one of Europe’s leading development and production partners for medical technology products and components. In recent years, this industry has been in a global elimination process where increasing demands for quality, process documentation, and product consistency force customers to use fewer suppliers. The automated factory is a mantra used within the company that impacts all employees. The approach includes ambitious investments in new user-friendly and flexible production equipment and the latest automation technology, including a mobile robot MiR100 from Mobile Industrial Robots.

“When we first got our mobile robot it was fun, but also a little weird. What is this thing doing here? And how will it do it?” said says Majbritt Breiling, quality control employee at Elos. “But as it started moving around the factory from A to Z, it enabled a much better and faster flow in our material delivery. Before, we tended to collect things in big piles, but now we get a steady stream of deliveries.”

MiR100 runs continuously in a fixed route within the company. On an annual basis, the robot logs more than 1,000 miles. Those operation hours amount to half a full-time employee position, which is now freed up to perform tasks other than internal transport. “Staff members who normally had to transport goods for further processing in other departments can now place them on MiR100 when it passes on its bus route. This means they can avoid downtime and interruptions and continue processing the goods in their own department,” said Per Hansen, developer at Elos.

A wave of automation has flown into the industry worldwide in recent years, even in countries with lower labor costs than Denmark. This is a challenge that Elos is now ready for, although automating work processes in a company that produces more than 3,000 different item numbers in batches down to 100 units is not always simple. But Elos’ results speak for themselves: the order book is growing, earnings have increased, and growth continues. The company has almost halved its average order lead time, requiring only 16 days from production start to delivery compared to 30 days in 2012.

Elos has succeeded in “growing out of the risk” of terminating employees as a result of automation investments, with manageable staff growth from 116 to 145 employees over two years. Along with automation to improve productivity, new jobs have been created within the highly specialized manual assembly, in R&D, and in administration. 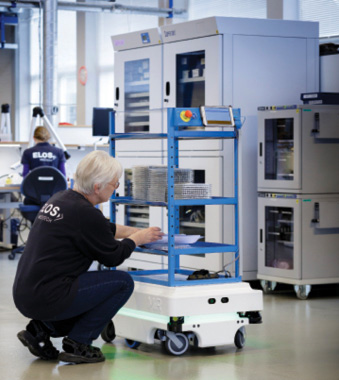 “We want to grow without adding more people than what is actually dictated by growth. Automation is a strategic focus area and our investment budget is increasingly allocating more automation and not just machinery. Whenever we invest in new equipment, it is now a requirement that it is a more automated solution than the one we already have. The objective is to reduce the amount of repetitive work and to strengthen the quality assurance of our products,” said head of R&D Henrik Andersen.

MiR100, which has a list price of $24,000, features technology that enables it to either map the service area and the surroundings or import 3D drawings of the buildings. MiR100 has a 220-lb cargo payload, and can be fitted with a tow hitch that can pull up to 660 lb. MiR can be equipped with different modular solutions, depending on the type of goods or materials needed to transport.

Mobile Industrial Robots (MiR) spent two years testing the mobile robot in different Danish jobs, collecting crucial user feedback while continuously tweaking the technology and functionality. Founder and CTO Niels Jul Jacobsen also observed that consumers have become accustomed to dealing with robots. “Robotic vacuum cleaners, robot lawn mowers, and robot cars have already paved the way for us. That’s why nobody bats an eye when MiR100 runs in quiet operation in between patients and staff at a hospital.”