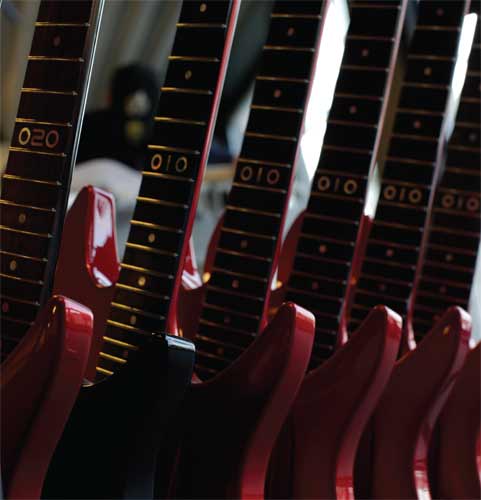 Paul McCartney, Keith Richards and Jimi Hendrix motivated 12-year-old Aristides Poort to learn how to play guitar, but rather than pursue the life of a rock star, he grew up and went on to study civil engineering at the Technical University of Delft in the Netherlands.

“It was a very inspiring environment where we worked on futuristic projects to improve society,” said Poort. That, however, didn’t mean he forgot his early musical heroes. Rather, after graduation he used his engineering skills to envision and build the ideal guitar.

Poort’s dream guitar would have perfect tone and longer sustain, which is the ability of a string to sustain its vibration. It would be electric, but it would resonate like a fine violin. You might think those qualities have to be forced with electronic circuitry; however, Poort said a truly great instrument gives off a warm and sweet-sounding hum unplugged, with very little buzzing through the body when you strike the strings.

The complexities of guitar design

Guitar design is quite complex and requires a careful balance between finding the right design and right materials. The design of a guitar is further complicated by its complex, curved surfaces. Poort turned to his alma mater to work on his visionary instrument.

His unique mission was to develop a material with perfect acoustic properties with the main emphasis on resonance and sustain. Sustain mainly depends on how much of the string’s energy is absorbed and not returned by the material with which the instrument is made.

The relationship between a material and tone is: the higher the mass, the higher the retention of energy, the higher sustain of the note. The denser and stiffer the material an instrument body, especially the neck, is made of, the less of the string’s vibration will be absorbed by the material itself (instrument) and the more the resonant peak of the wood will raise over the resonant peak of the strings, allowing them to vibrate freely with no interferences. This translates into a longer string vibration (sustain).

Poort and his team from the Technical University started with research into different types of wood, which led to a technical study of cell structures and the mutual differences between them. Finding an answer to the question: “What happens to a sound wave in a material at the cell level?” made it possible to design the ideal cell structure.

“We looked at the cell structure of top-quality wood that all fine guitars and other stringed instruments are made from,” he said. “The wood influences the sound, defines how the guitar resonates and determines how the sustain works. But wood resonates in just two dimensions, due to its rigid fiber structure. There is nothing you can change about that.”

So Poort’s team rethought the material. In the end, they created a new fibergless material, which they called Arium. “Arium has no constraining fibers and so it can resonate anywhere it wants to,” said Poort. The result is a material with sonic characteristics like those typically found in an 18th century Stradivarius.

Even with Arium, Poort felt more innovation was needed, so in 2007 the company began development on a revolutionary new guitar. The requirements were:

To help, Poort enlisted Nout van Heumen, a freelance Dutch industrial designer, to turn his idea into a real product with PTC Creo.

“The goal was to create a guitar with very clean lines and a minimum of mechanical clunky-ness,” said Poort. “We needed to carefully balance aesthetics, comfort and acoustics.”

The company spent most of the following year producing and refining prototypes. By taking into account the overall weight and placement of the electronic and other components, the team gradually began to give shape to a whole new kind of guitar. 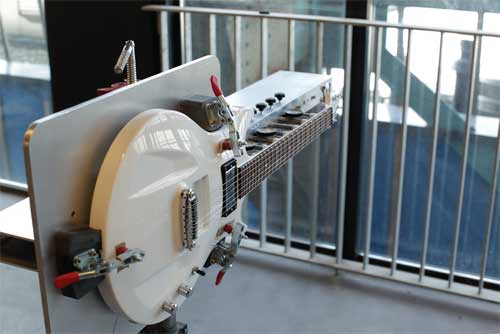 Choosing a material other than the traditional wood brought complexities to the task. “The big difference between a wooden guitar and this guitar is that it comes out of a mold, an aluminum mold,” said Poort. “You cannot change the mold; it has to be perfect, so you have to engineer everything in the computer to the last thousandth of a millimeter.”

Another complexity involves all of the curved surfaces of a guitar, which working with Creo greatly facilitated. “You can stitch these surfaces continuously together in PTC Creo, and that’s a very important tool for me,” said Poort. “The computer model, as a starting point, is 100% copied into the mold so there is no difference between the computer model and the actual guitar.”

Ergonomically, the team optimized the design for maximum playing enjoyment, from the smooth neck transition around the upper fret board to the matte surface of the body and neck, which keeps sweaty hands from losing their grip.

“I created all the main parts of the guitar, even strings and tuners, in PTC Creo,” said van Heumen. “By using the parametric modeling approach, I easily created a model with which I could change the scale and neck angle of the guitar and the whole design would correctly update.”

Even the guitar’s neck profile is created as a parametric surface, which can change together with the scale and width of the neck. “This helps us reduce the number of prototypes, increase the concept designs we can explore and even speed up designs of future models,” said van Heumen.

The most striking part of the guitar is the heel. Most guitar necks are bolted to the body, but the Aristides combines the two in one piece. “The transition is very smooth,” said van Heumen. “In fact, it’s not even visible.”

PTC Creo surfacing and curvature ensure the transition of the surfaces is continuous, supporting C2 curvature continuity where the curvature is continuous, but allowing the sharp change in slope needed between body and neck.

“With the fully detailed and parametric model of the guitar, we quickly created a physical prototype, and then tested it with a few guitarists for ergonomics and playability. With their feedback, I changed the scale and neck angle to optimize the design,” said van Heumen. “Those changes were very quick using PTC Creo.”

Van Heumen also used PTC Creo to design the aluminum molds and tools for manufacturing the guitar. “The guitar’s body, neck and headstock are a single piece. Because it uses a cast manufacturing process, it needs to have a continuous hidden parting line and draft that’s ergonomic and attractive,” he said. 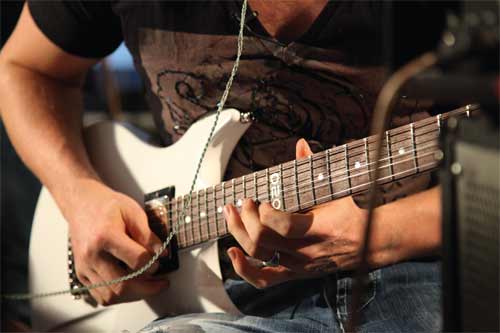 Since its launch, the Aristides OIO has received outstanding reviews and established loyal fans in North America, Japan and Europe, including Adrian Vandenberg, who played with David Coverdale and Whitesnake. Vandenberg says playing an Aristides is “like hitting a key on a Steinway grand piano!”