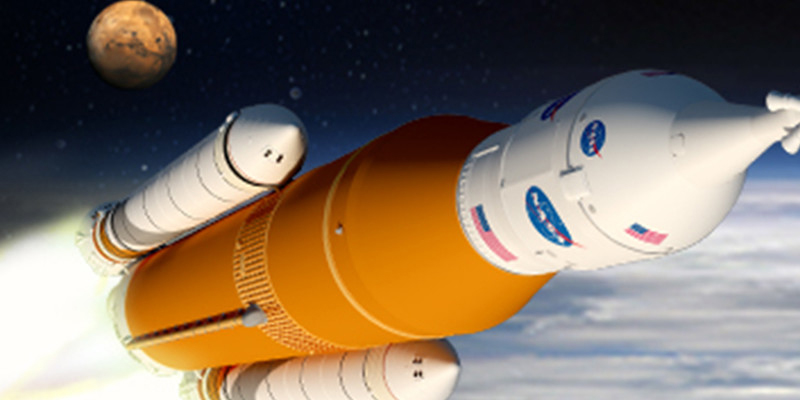 Our focus today at the Space Launch System (SLS) program is on building a new rocket – the most powerful in the world. On its first test flight, Exploration Mission-1, SLS will carry atop it an uncrewed Orion spacecraft, which will someday carry astronauts on a journey to deep space.

A similar scene was unfolding at NASA 48 years ago. On Nov. 9, 1967, the Saturn V rocket launched for the first time, carrying an Apollo spacecraft.

Less than two years later, a Saturn V rocket and Apollo spacecraft sent three astronauts sailing through the void between two worlds, culminating in two members of the crew becoming the first to set foot on another celestial body. The words spoken as the first boot dug into the powdery gray lunar regolith took their place among the most famous ever said.

“That’s one small step for [a] man; one giant leap for mankind.”*

The launch of Apollo 4 was the first from NASA’s Kennedy Space Center in Florida.

With SLS, Orion, and a revitalized space launch complex, we are developing capabilities for our next pioneering endeavor – a journey to Mars.

We continue to make progress toward that journey. Testing has begun on the boosters and engines for the Space Launch System rocket. The One-Year Crew is currently aboard the International Space Station, learning more about living in space for long durations.

Our robotic explorers on Mars discovered flowing water and the history of the Martian atmosphere. The Orion vehicle made its first spaceflight, traveling 15 times higher than the orbit of the space station before successfully returning to Earth.

These accomplishments, and many more over the last year, bring us closer to the “next giant leap” to Mars, but are all important in their own right. The journey to Mars is hard and the “small steps” along the way aren’t really that small.

And that’s the general idea behind a set of new videos we’re launching today – “No Small Steps.” The challenge of going to Mars is monumental, and it’s going to take a monumental rocket to make it possible.

In an entertaining and informative format, “No Small Steps” gets into the “how” of making that happen – taking rocket science and making it relatable to answer questions like how you power a rocket designed for Mars, how you build a rocket the same size as the Saturn V but make it more powerful, how SLS combines the best of NASA’s greatest launch vehicles and makes it even better. We’ll release the next two installments about a month apart, so stay tuned.

Because when it comes to our journey to Mars and beyond, there are no small steps.

*My take on the “for man”/”for a man” discussion: Neil was pretty awesome either way.