When Coupling Tips.com spoke with KTR Engineering Services Manager, Chris Scholz we asked him about some of the common misconceptions about couplings, torque limiters and the integration of the two. Here are some of the highlights from the interview.

We kicked things off by asking what topics are being brought up most often when fielding application questions and design inquiries. Here is what he had to say. 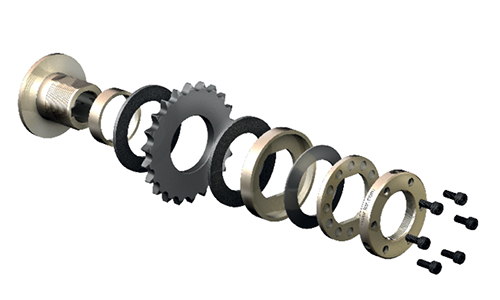 “One of the things that I try to understand first, is whether or not the torque limiter will be used only for catastrophic failure, or if the customer is looking to slip frequently: are they expecting more slips than usual? That, then, tells me whether I want to use an economical friction style torque limiter, or if I want to use the ball detent designs, where they can slip, catch a limit switch, shut off, and then reset themselves, and begin operating again. They typically can be slipped multiple times through their application, where a friction torque limiter has to be reset every time.

I also try to determine whether a zero backlash component is needed, and address other typical industry questions. The biggest misconception that I want to make sure people understand is that a torque limiter is not a clutch, and therefore they’re not intended to be continuously slipped.

They generate a lot of heat, obviously, with those frictional connections, and so once a torque limiter slips we want the system to be shut down as soon as possible. We obviously then want to inspect that torque limiter, and check for any wear, or heat damage. Re-checking the setting torque is also important; it will decrease quite a bit if it’s been run too long. We want to make sure that we’re still in the range that we need to be in so we’re not slipping more and more. The way we do that is either with a limit switch, or a proximity switch, and some type of control device. That way when the torque limiter slips, it sends a signal, and shuts the system down so the customer can do whatever it is the torque limiter was designed to catch, or do.”

Why are torque limiter’s important? What are they used for?
“Torque limiter’s are devices that allow the limiting of torque for high-shock, catastrophic failure type applications. They’re used when people don’t want to damage their equipment. Engineers will integrate a torque limiter to be set at a certain value of torque, so that if it reaches beyond that torque setting the torque limiter will slip to save higher value equipment, or high-cost shafting, or whatever the case may be. In the basic terms, it’s limiting torque, based on a predetermined setting, usually using springs, or ball detents.”

Can you tell us a little bit about idle rotation in torque limiters? “When a torque limiter of this style disengages, its outer casing shifts back, and will not re-engage until manually reengaged; so it basically becomes a free-running bearing. Then, once the engineer determines the torque overload issue, they can stop the machine, and manually push the unity back in place to be engaged to run again.

We typically see these torque limiter configurations in much larger applications, so there’s time to stop a system, and check things out. We see them in shaft-to-shaft applications, large rollers, steel mills etc.”