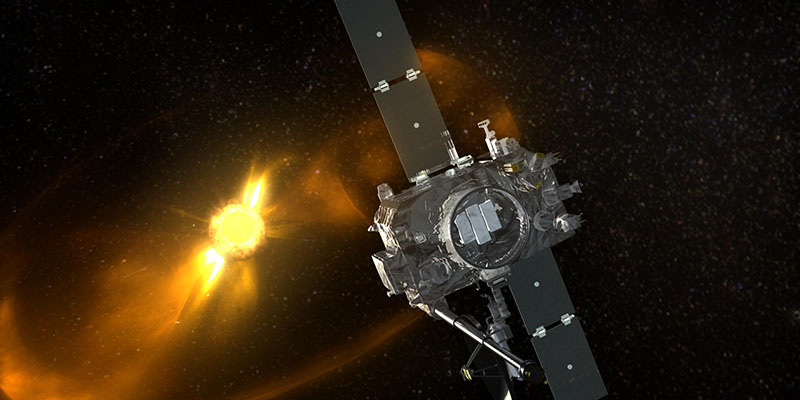 NASA mission operations lost communication with one of the two spacecraft of the Solar and Terrestrial Relations Observatory, or STEREO, mission, just as the spacecraft was about to orbit around the other side of the sun.

Though they haven’t heard from the Behind spacecraft, also known as STEREO-B, in over a year, the spacecraft has finally emerged into a region where it can once again receive radio signals. Scientists have a plan to get it back—and their chances only get better with time.

The two STEREO spacecraft, launched in October 2006, were originally designed to complete a two-year mission, ending in 2008. But—like many NASA spacecraft—they lasted much longer.

The long lives of the two STEREO spacecraft, now nine years old, have been a boon for scientists studying the sun and its influence throughout the solar system.

The two STEREOs slowly drifted away from Earth as they orbited the sun, one ahead and one behind our home planet, giving scientists constantly-improving views of the sun’s far side, allowing us for the first time to see the whole sun at once.

However, there are always challenges associated with operating a spacecraft for more than four times its original lifespan. In STEREO’s case, its orbit was the biggest hurdle. The same slow drift that lets the two STEREO spacecraft give us widely varying views of the sun means that each spacecraft eventually lay on the other side of the sun from Earth, leading to a three-month period where communication was impossible due to the sun’s interference. 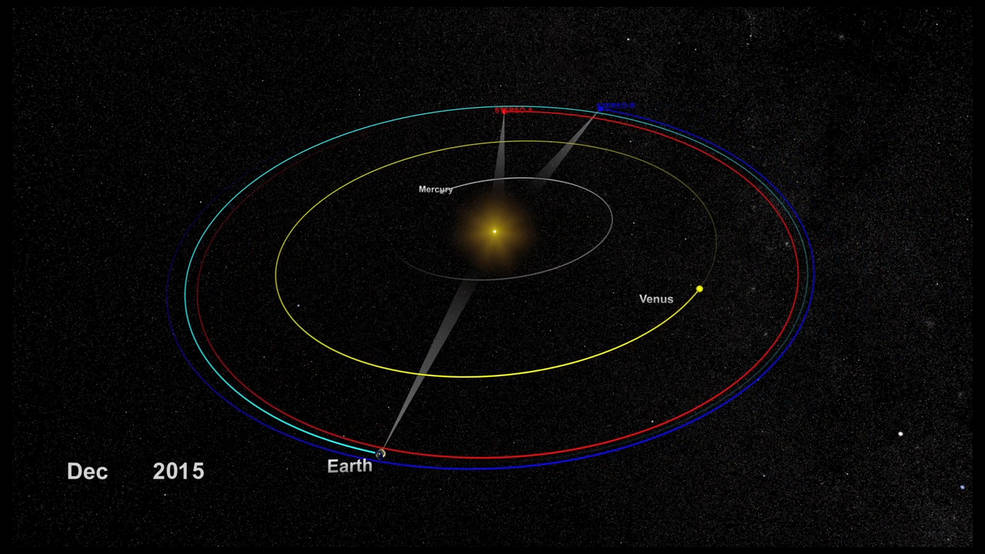 “The sun emits strongly in nearly every wavelength, making it the biggest source of noise in the sky,” said Dan Ossing, mission operations manager for the STEREO mission at the Johns Hopkins University Applied Physics Laboratory in Laurel, Maryland. “Most deep space missions only have to deal with sun interference for a day or so, but for each of the STEREO spacecraft, this period lasted nearly four months.”

When the team realized that the STEREO spacecraft would operate long enough to enter this interference zone, they began planning.

“We had to take a spacecraft that was meant to talk to Earth every day and get it ready for over three months of radio silence,” said Ossing.

The STEREO spacecraft were designed with a command loss timer, an automatic reset button that restarts the spacecraft after 72 hours without contact. This reset is intended to correct any issues that could be preventing communication.

The command loss timer can’t be changed—meaning that during its phase on the other side of the sun the two STEREO spacecraft would be rebooting every three days for over three months straight.

Regardless, mission operators planned to make it work. They were in the middle of testing the reset by intentionally withholding communications from STEREO-B for three days—a test that had already been completed with great success on STEREO-A—when communications were lost.

The hard reset happened as expected, 72 hours and 20 minutes after operators stopped communications with the spacecraft. After the reset, STEREO-B was supposed to power itself back on, identify certain stars so it could point its antenna at Earth, and send down a status report.

At first, everything went well. Seconds after the reset, the STEREO team received a signal from STEREO-B—but it was much weaker than they expected, and it quickly faded away. That was the last time we heard from STEREO-B.

The signal received was so weak and so brief that the team was able to extract only a few packets of data to form a partial status report. From that small amount of information, the STEREO team was able to extrapolate the most likely case for where the Behind spacecraft is and what it’s doing.

“The telemetry showed that the Inertial Measurement Unit, or IMU—which tells the spacecraft if and how fast it’s rotating—failed in a way we didn’t expect,” said Ossing. “Rather than cutting out altogether, it was feeding incorrect information into the guidance and control computer.”

The STEREO team thinks this bad information led the guidance and control computer down a path that eventually sent the spacecraft spinning, leaving its solar panels dark most of the time and its battery only intermittently charged.

If STEREO-B had stayed in contact, this is the kind of problem the STEREO team could fix. Though not easy, it’s a matter of instructing STEREO-B’s computer to ignore the information from that particular IMU.

However, contact with STEREO-B cut out before the team could correct the error, meaning that the spacecraft is drifting in space with incorrect information about how it’s moving—a big problem for a spacecraft that needs to keep itself pointed at the sun to stay powered on.

“The bad IMU told STEREO-B that it was spinning, even though it was stationary,” said Ossing. “The spacecraft would have automatically taken steps to correct the supposed spin.”

The problem? STEREO-B’s methods for stopping a spin—including spinning internal reaction wheels and firing its thrusters—would cause a stationary spacecraft to start spinning.

And based on the STEREO team’s simulation of what the spacecraft would have done, it’s likely now spinning in a way that means its solar panels are getting sunlight only part of the time, leaving it without power for long periods.

“When STEREO-B’s gets enough power to start booting up, there are several systems that come on automatically,” said Bill Thompson, chief observer for the STEREO mission at NASA’s Goddard Space Flight Center in Greenbelt, Maryland. “But those systems are probably draining all the power and preventing the battery from charging up. We need the battery to have a decent charge before the transmitter can be turned on and send us a signal.”

As of Nov. 30, 2015, spacecraft operators have had three three-hour blocks of time on the Deep Space Network each week to try and contact STEREO-B. The first two blocks are dedicated to building up the charge in the spacecraft’s battery by telling it turn off the flight systems that boot up automatically.

If STEREO-B can reduce the amount of power it consumes during those brief periods when its battery is charging, the spacecraft could remain on long enough to talk to—and receive commands from—Earth. The third block in each sequence is spent sending commands to turn on the spacecraft’s transmitter.

“If it’s not transmitting, we have no way of knowing if our efforts are working,” said Ossing.

The transmitter requires a command to turn on after a charge-up because of its enormous power. If the transmitter were automatic, it could have turned on while the spacecraft was still being built and tested here on Earth or during launch, posing a danger to people on the ground.

Though spacecraft operators have an initial plan to make contact with STEREO-B, the path to recovery isn’t clear or easy. Part of the problem is how little information we have about what caused the loss of communications with STEREO-B.

“The only concrete information we have is that the IMU was feeding bad information to the guidance and control system,” said Ossing. “From there, we made educated guesses about what the spacecraft would do.”

Part of the problem is uncertainty about STEREO-B’s position—since it has been drifting out of contact for over a year, mission operators don’t know exactly where it is.

Further complicating this is the likelihood that STEREO-B would have used its thrusters as part of its effort to correct the nonexistent spin, possibly pushing it even further off course. This means that the STEREO team will have to sweep their signal over a significant portion of sky to make sure they reach STEREO-B.

NASA has recovered spacecraft from similar situations before—notably, ESA/NASA’s Solar and Heliospheric Observatory, or SOHO, was out of contact for six weeks in 1998 before it was recovered. But the distance to SOHO was much smaller, only about a million miles, compared to the 189-million-mile gap between Earth and STEREO-B.

As with all spacecraft, we don’t know exactly what frequency STEREO-B will be listening for. Typically, operators will sweep through the range of frequencies that the spacecraft’s receiver can pick up until the spacecraft locks on to one, a process that usually takes a minute or two.

But this is impractical for STEREO-B, given the huge distance, which yields a round-trip communications delay of over half an hour.

“The Deep Space Network was able to create an acquisition technique that can sweep through a frequency segment in about ten seconds,” said Ossing. “We’ve tested it on the Ahead spacecraft, and it worked even better than expected.”

Furthermore, the distance means that any signal that has a hope of reaching STEREO-B must be much, much stronger than the signals we send to near-Earth missions.

Engineers have a plan to increase the power of the signal we send to STEREO-B through something called constructive interference. By combining the signals from multiple stations in the Deep Space Network with specific timing and configurations, the waves that form the radio signals collide perfectly to create an even stronger signal.

“Constructive interference creates a new signal that’s more powerful than the sum of its parts,” said Thompson. “We’re combining signals from three 34-meter antennas, which will give us a signal more than twice as powerful as a 70-meter antenna.”

Because STEREO-B is so far from Earth, any signal it sends back to us will likely be too weak for the Deep Space Network to interpret. So, several of the largest radio telescopes in the world—including the Green Bank Radio Telescope, Arecibo Observatory, and the Allen Telescope Array—will be listening for STEREO-B’s transmission.

The STEREO-B recovery will be fraught with challenges—but it will only get easier over time. Because the spacecraft is on an orbit similar to Earth’s, but lagging behind, Earth will lap STEREO-B in 2023, meaning that the spacecraft gets closer to us every day that passes until then.

“In 2019, the spacecraft will be far enough from the sun that we could image it directly with Hubble and figure out the rate of spin,” said Ossing. “We’re very hopeful that we’ll recover STEREO-B, but it’s just going to take time.”

STEREO is the third mission in NASA’s Solar Terrestrial Probes program, which is managed by NASA Goddard for NASA’s Science Mission Directorate, in Washington, D.C.