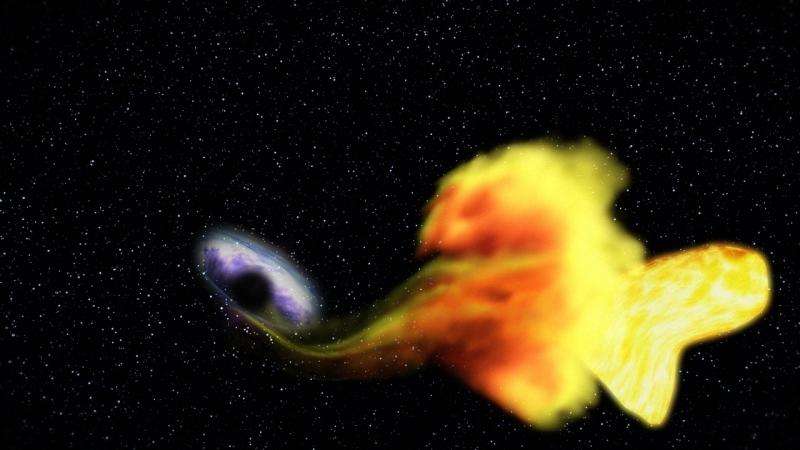 An international team of astrophysicists led by a Johns Hopkins University scientist has for the first time witnessed a star being swallowed by a black hole and ejecting a flare of matter moving at nearly the speed of light.

The finding reported Thursday in the journal Science tracks the star—about the size of our sun—as it shifts from its customary path, slips into the gravitational pull of a supermassive black hole and is sucked in, said Sjoert van Velzen, a Hubble fellow at Johns Hopkins.

“These events are extremely rare,” van Velzen said. “It’s the first time we see everything from the stellar destruction followed by the launch of a conical outflow, also called a jet, and we watched it unfold over several months.”

Black holes are areas of space so dense that irresistible gravitational force stops the escape of matter, gas and even light, rendering them invisible and creating the effect of a void in the fabric of space. Astrophysicists had predicted that when a black hole is force-fed a large amount of gas, in this case a whole star, then a fast-moving jet of plasma – elementary particles in a magnetic field – can escape from near the black hole rim, or “event horizon.” This study suggests this prediction was correct, the scientists said.

“Previous efforts to find evidence for these jets, including my own, were late to the game,” said van Velzen, who led the analysis and coordinated the efforts of 13 other scientists in the United States, the Netherlands, Great Britain and Australia.

The first observation of the star being destroyed was made by a team at the Ohio State University, using an optical telescope in Hawaii. That team announced its discovery on Twitter in early December 2014.

After reading about the event, van Velzen contacted an astrophysics team led by Rob Fender at the University of Oxford in Great Britain. That group used radio telescopes to follow up as fast as possible. They were just in time to catch the action.

By the time it was done, the international team had data from satellites and ground-based telescopes that gathered X-ray, radio and optical signals, providing a stunning “multi-wavelength” portrait of this event.

It helped that the galaxy in question is closer to Earth than those studied previously in hopes of tracking a jet emerging after the destruction of a star. This galaxy is about 300 million light years away, while the others were at least three times farther away. One light year is 5.88 trillion miles.

The first step for the international team was to rule out the possibility that the light was from a pre-existing expansive swirling mass called an “accretion disk” that forms when a black hole is sucking in matter from space. That helped to confirm that the sudden increase of light from the galaxy was due to a newly trapped star.

“The destruction of a star by a black hole is beautifully complicated, and far from understood,” van Velzen said. “From our observations, we learn the streams of stellar debris can organize and make a jet rather quickly, which is valuable input for constructing a complete theory of these events.”

Van Velzen last year completed his doctoral dissertation at Radboud University in the Netherlands, where he studied jets from supermassive black holes. In the last line of the dissertation, he expressed his hope to discover these events within four years. It turned out to take only a few months after the ceremony for his dissertation defense.

Van Velzen and his team were not the only ones to hunt for radio signals from this particular unlucky star. A group at Harvard observed the same source with radio telescopes in New Mexico and announced its results online. Both teams presented results at a workshop in Jerusalem in early November. It was the first time the two competing teams had met face to face.

“The meeting was an intense, yet very productive exchange of ideas about this source,” van Velzen said. “We still get along very well; I actually went for a long hike near the Dead Sea with the leader of the competing group.”