What appears to be a unique selfie opportunity was actually a critical photo for the cryogenic testing of NASA’s James Webb Space Telescope in Chamber A at NASA’s Johnson Space Center in Houston. The photo was used to verify the line of sight (or path light will travel) for the testing configuration.

During Webb’s extensive cryogenic testing, engineers checked the alignment of all the telescope optics and demonstrated the individual primary mirror segments can be properly aligned to each other and to the rest of the system. This all occurred in test conditions that simulated the space environment where Webb will operate, and where it will collect data of never-before-observed portions of the universe. Verifying the optics as a system is a very important step that will ensure the telescope will work correctly in space.

The actual test of the optics involved a piece of support equipment called the ASPA, a nested acronym that means “AOS Source Plate Assembly.” The ASPA is a piece of hardware that sits atop Webb’s Aft Optics Subsystem (AOS), which is recognizable as a black “nose cone” that protrudes from the center of Webb’s primary mirror. The AOS contains the telescope’s tertiary and fine-steering mirrors. The ASPA is ground test hardware, and it will be removed from the telescope before it is launched into space.

During testing, the ASPA fed laser light of various infrared wavelengths into and out of the telescope, thus acting like a source of artificial stars. In the first part of the optical test, called the “half-pass” test, the ASPA fed laser light straight into the AOS, where it was directed by the tertiary and fine-steering mirrors to Webb’s science instruments, which sit in a compartment directly behind the giant primary mirror. This test let engineers make measurements of the optics inside the AOS, and how the optics interacted with the science instruments. Critically, the test verified the tertiary mirror, which is immovable, was correctly aligned to the instruments.

Taken together, the half-pass and pass-and-a-half tests demonstrated all the telescope optics are properly aligned and that they can be aligned again after being deployed in space.

The photo, snapped by Ball Aerospace optical engineer Larkin Carey after the final fiber optic connections between ASPA and the laser source outside the chamber were made, verified the line of sight for the pass-and-a-half part of the test. The image was compared with one collected once the telescope was cold inside the chamber, to ensure any observed obscurations were due to the ASPA hardware and would not be present during science data collection on orbit.

“Intricate equipment is required to test an instrument as complex as the Webb telescope. The ASPA allowed us to directly test key alignments to ensure the telescope is working as we expect, but its location meant we had to have a person install over 100 fiber optic cables by hand over the primary mirror,” said Allison Barto, Webb telescope program manager at Ball Aerospace. “This challenging task, which Larkin rehearsed many times to ensure it could be performed safely, also offered the opportunity to check the alignments by taking this ‘selfie’ prior to entering the test.”

After cryogenic testing at Johnson is complete, Webb’s combined science instruments and optics journey to Northrop Grumman in Redondo Beach, California, where they will be integrated with the spacecraft element, which is the combined sunshield and spacecraft bus. Together, the pieces form the complete James Webb Space Telescope observatory. Once fully integrated, the entire observatory will undergo more tests during what is called “observatory-level testing.” This testing is the last exposure to a simulated launch environment before flight and deployment testing on the whole observatory.

Webb is expected to launch from Kourou, French Guiana, in the spring of 2019.

For more information about the Webb telescope visit: http://www.webb.nasa.gov or http://www.nasa.gov/webb 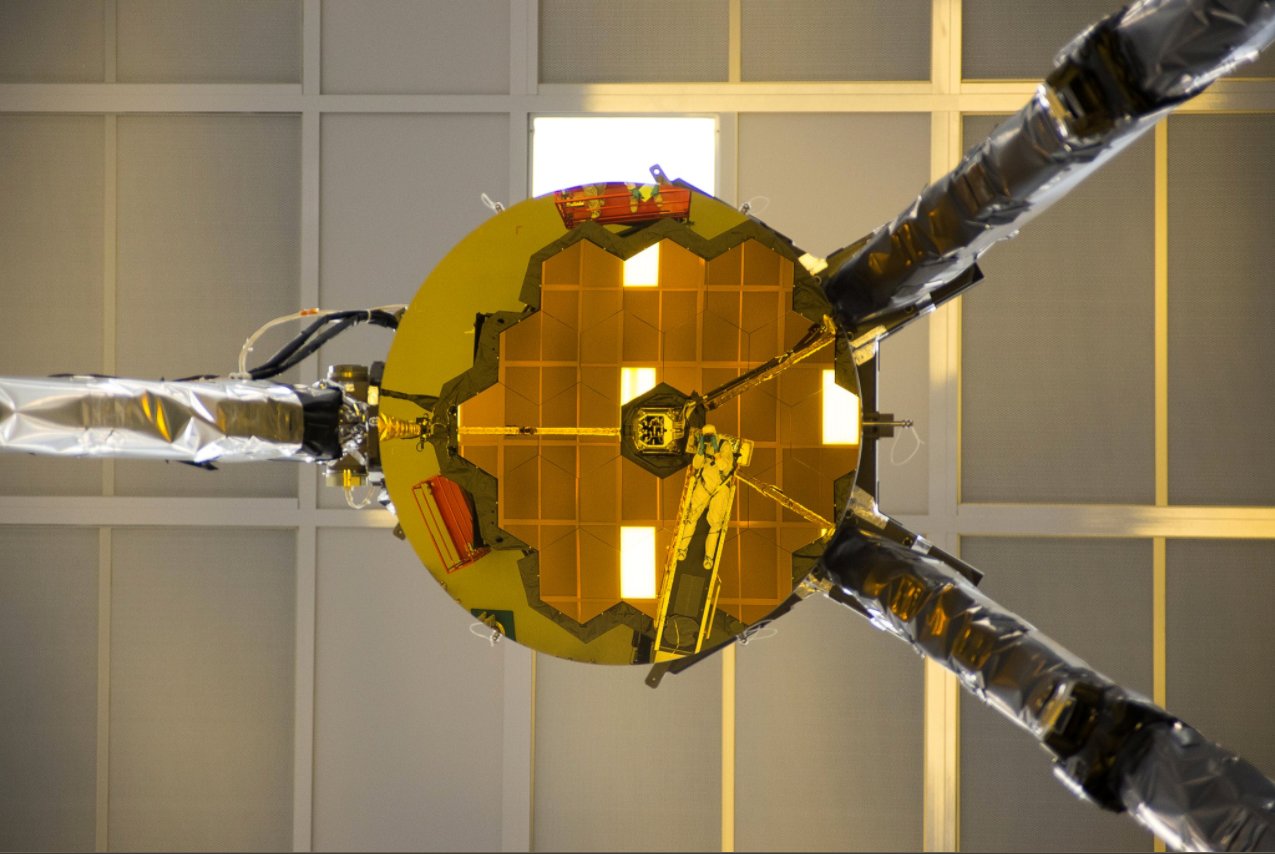