When just 100th of a second determines a winner, car racing team owners
and members constantly seek ways to shave time from every aspect of a
race. Gillett Evernham Motorsports (GEM) in Statesville, N.C. knows
that the performance of a tire handler behind the pit wall can be as
important to winning as the right driver. For its three teams that
compete in NASCAR’s Sprint Cup Series and one team in the NASCAR
Nationwide Series, consistent execution and continuous improvement are
a way of life. 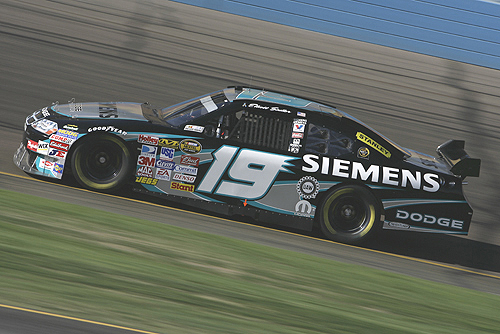 NASCAR
pit crews once relied on VHS video or DVDs to record, replay and
evaluate pit stops. Unfortunately, the videos seldom recorded the
important work of handling air hoses and tires behind the wall. It also
took precious minutes to cue the videos up for replay following a pit
stop. Indexing from one part of the video to the next was tedious and
difficult. GEM eliminated these problems by using a sophisticated touch
screen computer technology from Siemens Energy & Automation.
Siemens’ compact, 19.1” SIMATIC® Panel PC touch screen color displays
are mounted on each GEM team’s pit cart located just outside the wall
of the pit box.

Enclosed in durable metal housings, these
panel PCs are built to withstand the intense vibration produced when
800 HP cars pit within feet of the cart numerous times during a race.
They also hold up under the stress of being shipped to race tracks for
38 races in the United States, Mexico and Canada where they operate in
hot, cold, rain, snow and sleet–and boot up every time.
Timing the crew to a 1/1000th of a second while eliminating tedious editing.
By
using the very accurate playback capabilities of the Siemens touch
screen panel PCs combined with the DB software, GEM can now time the
crew to 1000th of a second. Also, with a very high memory capacity and
a resolution of 1280 X 1024 pixels, the crew can easily see how they
perform on the full screen.

Every part of each pit stop is
scrutinized immediately following a stop. Each corner of the pit box
and the activity behind the wall are captured by two video cameras
mounted on the pit cart. The video is converted to a digital signal
then sent via FireWire to the touch screen panel PC.  The pit stop may
be immediately replayed simply by touching the screen. An indexing
device simplifies rewinding, zooming, fast-forwarding, pausing and slow
motion.

“One racetrack has small pit boxes
with painted white lines,” Wilson says. “In our first two stops, our
crew members were slipping on these lines. By using the touch screen,
we were able to zoom in and determined the problem was caused by a
little bit of brake dust sitting on top of the line.”

Moreover,
the touch screen panel PCs and software have reduced the editing time
from a day to just a few minutes. Whereas the video once had to be
converted to a digital signal requiring a tedious process of hitting
stop, play and fast forward while looking at a stopwatch, it takes just
a few minutes to break down the film while flying back from a race.

Even with a great car, you don’t win races without a great pit crew.
Today,
the average GEM pit stop time is respectable 12.6 seconds. By next year
the goal is to lower pit stops to the high 11s or low 12s. In sum,
NASCAR visionary Evernham says GEM is partnering with technology
partners like Siemens to beat every body at every pit stop.

“Siemens
has been a great partner in many ways,” says Ray Evernham. “The
technology and knowledge they have provided to our team has allowed us
to work on and develop some new strategies to be our best on every race
day.”