Darshan Mehta, Tektronix Inc.
The only way advanced driver-assistance systems (ADAS), smart safety systems, and autonomous vehicle functions can be practical is through use of reliable in-vehicle networking and high-bandwidth connections. Cars can now contain as many as 100 electronic control modules (ECUs) monitoring sensors through yards of cable harnesses. Traditional automotive networks such as CAN, CAN-FD, LIN, MOST, and FlexRay simply don’t provide enough bandwidth to support all of the devices and applications that define modern vehicles, much less the autonomous highly connected cars of the future. 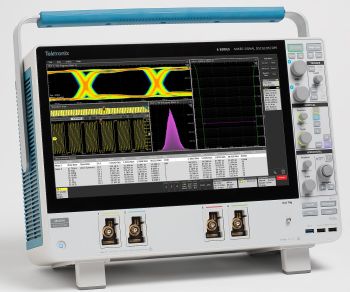 The Tektronix MSO 6 Series has an analog bandwidth of up to 8 GHz, a sampling rate of 25 GS/sec, and 12-bit resolution to accurately capture Automotive Ethernet signals.

Consequently, there is an industry wide move to Automotive Ethernet. Although the automotive standard originated in Ethernet, it incorporates significant changes at the physical layer to meet automotive needs. The first version of the standard was called BroadR-Reach and is being supplanted by the IEEE versions known as 100BASE-T1 (802.3bw) and 1000BASE-T1 (802.3bp).

The standard being designed into most cars today is 100BASE-T1, which supports 100 Mbps operation in the noisy automotive environment. This data rate is significantly higher than traditional bus systems such as the CAN bus. Future designs will use 1000BASE-T1, at 10X the data rate. As signaling moves to higher data rates, so, too, does the need for comprehensive design validation at the system level. Validation ensures interoperability and reliable operation across the many ECUs and sensors. In the same vein, design considerations safely overlooked in the past now start to matter.

The OPEN (One-Pair Ethernet) Alliance has defined specifications for Automotive Ethernet encompassing components, channels and interoperability, and encompassing integration of ECUs, connectors and untwisted cables. To meet reliability requirements, testing must take place under the noisy conditions found within vehicles. This kind of testing, in turn, requires that testers characterize and visualize signal integrity and traffic at the system level under real-world conditions.

Ideally, you should perform signal integrity testing at the vehicle integration phase to select cables, determine optimal cable lengths and routing, check ECU performance in the presence of electromagnetic noise, etc. For visualizing the health of the system, an oscilloscope-generated eye diagram is the most valuable tool. It also provides insight on the overall health of the physical layer (PHY) and can help identify errors caused by high temperatures or noise. Also, accurate timing measurements at the system level are critical for determining latency when using gateways that convert CAN or other traditional buses to Automotive Ethernet and vice versa.

Automotive Ethernet’s 100 Mb/sec data rate calls for an oscilloscope incorporating a bandwidth of at least 1 GHz along with high sampling rates. For 1000BASE-T1, the necessary bandwidth is in the 2-GHz range. Ideally, the scope should come equipped with a PAM3 analysis software package having software clock recovery. These capabilities provide a better understanding of signal qualities for the validation and characterization of PAM3 designs having different cable lengths, noise conditions or ECU configurations.

Both full-duplex communication and PAM3 signaling, while vital to the performance of Automotive Ethernet, complicate the validation of ECUs under real-world conditions. Most serial standards operate in a simplex mode, with only one device communicating at a time, or devote separate links to the transmitter and receiver. With Automotive Ethernet, however, the master and slave device communicate simultaneously over the same link. As a result, the signals from the master and slave overlay on each other. The master knows what data it has sent, so it can separate out the slave’s signal. The transceiver is designed to handle this situation, but it is virtually impossible on an oscilloscope to isolate the signal for signal integrity testing or protocol decode.

To analyze signal integrity over a link and decode protocols in a real system environment, automobile designers must look at each link separately. This requires separating the signals before performing analysis.

Currently, there are two methods for separating master and slave signals. The first, the traditional method, requires cutting the Automotive Ethernet cable and splicing a directional coupler in each wire of the twisted pair to separate and test the signals. Technicians must physically cut the cable to implement the test, which introduces accuracy problems. 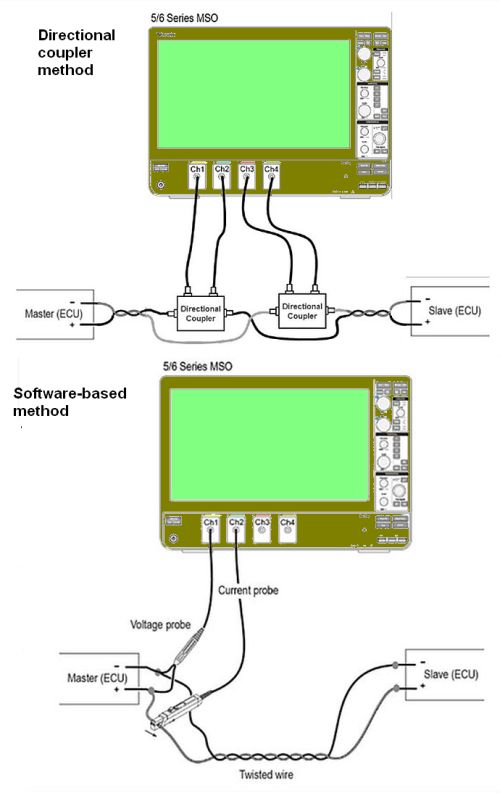 It is not easy to cut the cable, which makes this method less than ideal for most system-level testing applications. While this approach does provide access to the master and slave signals, it introduces insertion and return loss, which can make it difficult to determine if an error results from the additional hardware. And, while it is possible to remove the effects of the directional coupler, de-embedding (basically, removing the effects of the test fixture from the data) can amplify the noise in the system and degrade measurement and characterization accuracy.

More recently, test manufacturers have devised software and probes to non-intrusively separate the signals, allowing engineers to visualize the true signals with greater clarity. The connections involved consist of an inductive current probe monitoring one of the twisted-pair wires and a differential probe placed across the twisted pair.

But there have been questions about whether this new method is more accurate than the old directional coupler technique. To compare the two directly, we first ran tests using the software-based method. We then cut the Automotive Ethernet cable and inserted directional couplers with SMA connectors. We used the same test conditions and compared the test outcomes. 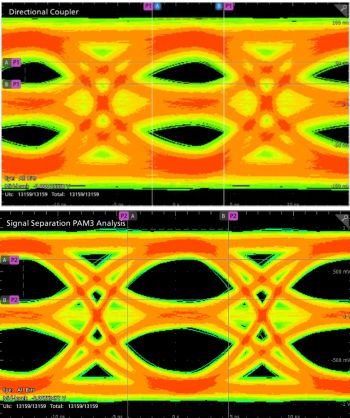 In contrast, the software approach uses an algorithm to separate voltage and current waveforms from both the master and slave test points. This approach provides a much more accurate representation of Automotive Ethernet signals, helping to identify potential performance issues in less time and with greater confidence.

Test personnel must compensate for the insertion and return loss introduced by the directional coupler. The resulting de-embedding process can be time consuming and challenging. It should also be noted that it can be challenging to cut the cable and install directional couplers when working in a real vehicle. 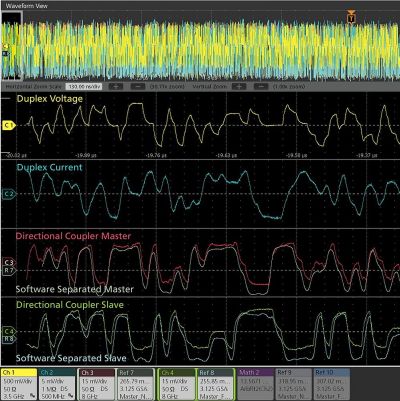 A comparison of peak-to-peak voltage shows a 20-dB loss due to the directional coupler.

In comparison, the software-based method as illustrated here shows the true signal without disrupting the system. This new Automotive Ethernet test methodology will allow engineers to characterize signals faster and more accurately. This method overcomes many of the challenges associated with performing Automotive Ethernet signal integrity tests at the system level and opens up a wide range of new use cases that were once tough to perform.

It is useful to review of few of the more advanced tests made accessible via the software-based method. For example, the 100/1000BASE-T1 specification defines a return Loss measurement that requires a VNA. Automotive Ethernet test software allows the designer to perform return loss measurement using an oscilloscope, reducing the need for additional test equipment. 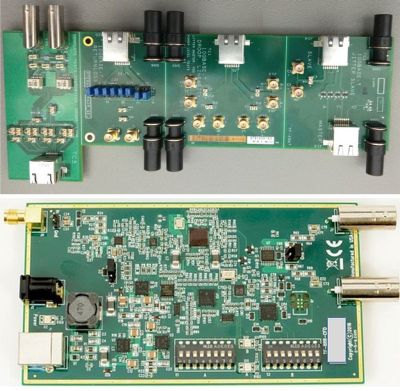 Because PHY frequencies are in the gigahertz range, test probes can cause line reflections and other distortions that can garble measurements. Tektronix recommends using its TF-XGbT Ethernet fixture (top) and TF-BRR-CFD clock divider fixture (bottom) to minimize distortion when making connections to Ethernet transmitter output and reference clock signals .

A distortion test defined in the spec requires access to the ECU clock, which is often impractical. A special software correction method eliminates the need for the clock connection for 100BASE-T1 and 1000BASE-T1.

Another portion of the spec defines a return loss test that determines how much Ethernet line impedance differs from the differential impedance specification of 100 Ω, because mismatches will affect hardware interoperability. A VNA can run this test but an oscilloscope equipped with the software solution can perform it as well, no VNA required.

One last example is that of power spectral density (PSD) measurements. Built-in oscilloscope software computes the spectra of an input signal. Post processing on the signal yields the PSD. The computed PSD is then compared with the specification using masks.