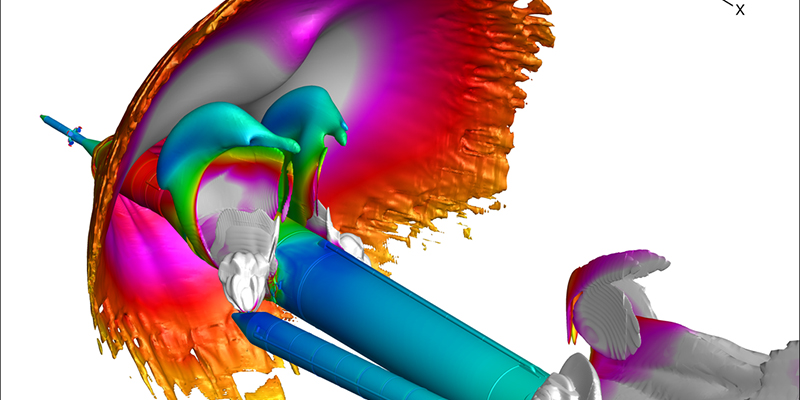 The SLS configuration consists of a center core stage with four RS-25 engines and two solid rocket boosters (SRBs), which separate from the core as fuel is exhausted soon after liftoff.

To help SLS design engineers understand how aerodynamic forces will affect the path of the SRBs away from the core stage during separation, researchers at NASA’s Ames Research Center and the University of California, Davis, are running high-fidelity simulations of thousands of possible separation scenarios.

In this visualization, a shock wave (colored by pressure) is clearly shown at the front of the vehicle; farther back, booster separation-motor plumes are colored by Mach number.

The simulation was run on the Pleiades supercomputer at the NASA Advanced Supercomputing facility at Ames Research Center.

The visualization was part of a NASA showcase of nearly 40 of the agency’s exciting computational achievements at SC15, the international supercomputing conference, Nov. 15-20, 2015 in Austin.

For more information about NASA’s research presented at the conference, visit www.nas.nasa.gov/SC15/.