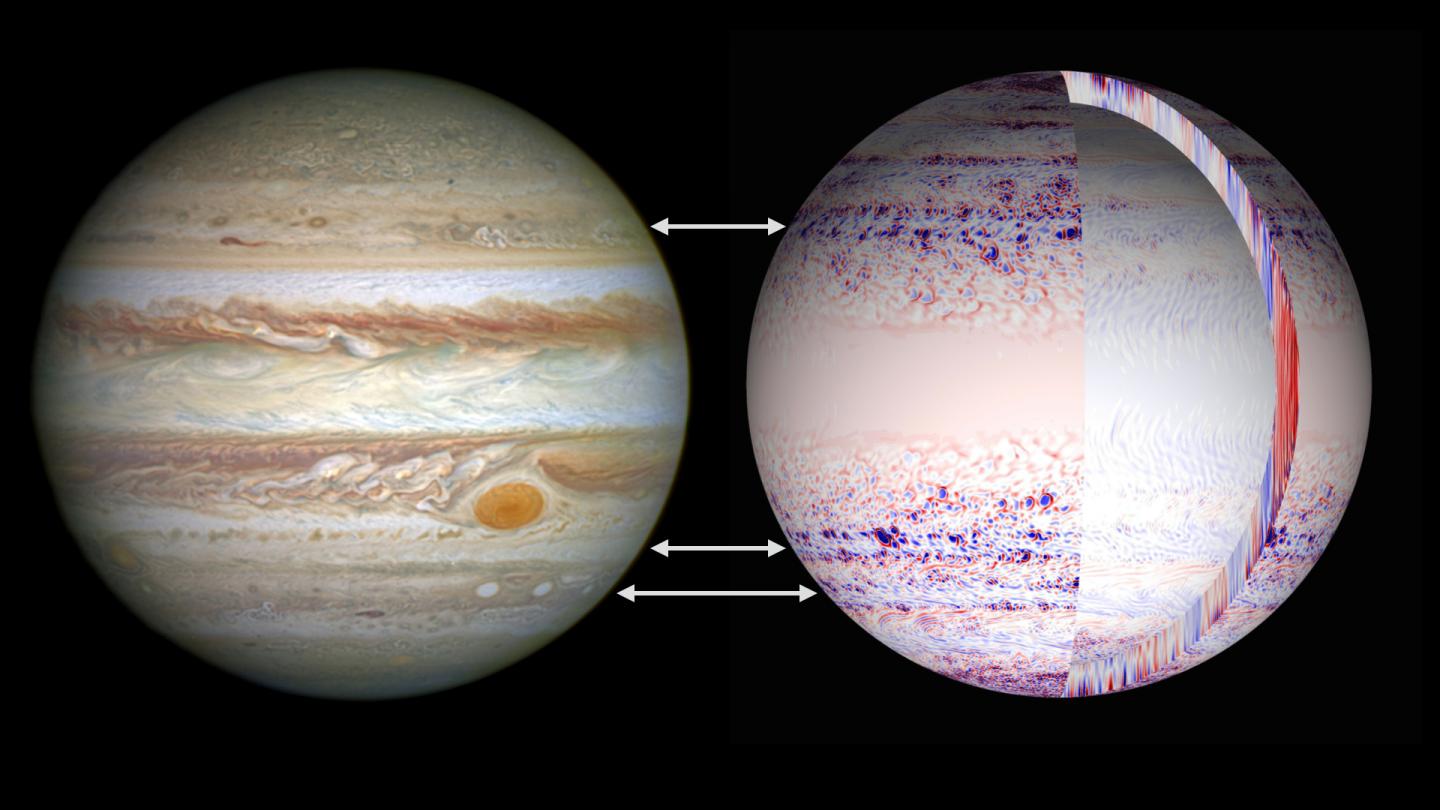 On the left side is a NASA image of Jupiter taken from Hubble Space Telescope. On the ride side is results of a 3-D simulation of Jupiter’s deep atmospheric flow. The image gives global views of the axial vorticity (curl of the fluid velocity) at the outer boundary, the interior boundary, and in a meridional cut. Blue spots are anticyclones, which are predominant on Jupiter and rotate in the direction opposite Earth’s cyclonic storms. In the simulation, the anticyclones are ringed by cyclonic filaments, which have also been observed on Jupiter. The image also reveals the vorticity of the zonal shear, which is much weaker than that of vortices. The interior flow is seen in the meridional cut to be strongly shaped by global rotation. Credit Moritz Heimpel, University of Alberta

A University of Alberta researcher has successfully generated 3D simulations of deep jet streams and storms on Jupiter and Saturn, helping to satiate our eternal quest for knowledge of planetary dynamics. The results facilitate a deeper understanding of planetary weather and provide clues to the dynamics of Earth’s weather patterns evidenced in jet streams and ocean currents.

“Since the pioneering telescope observations of Giovanni Cassini in the mid-17th century, stargazers have wondered about the bands and spots of Jupiter,” says Moritz Heimpel, a physics professor at the University of Alberta whose study produced the simulations of the observable phenomena. The bands he references indicate jet streams while the spots signify storms; Heimpel is studying the dynamics between the two.

“The average citizen can now pick up a backyard telescope and see the structures that we write about today. However, even in the present age with the Cassini spacecraft orbiting Saturn and the Juno craft approaching Jupiter, there is considerable debate about the dynamics of the atmospheres of the giant planets.” Heimpel notes that despite 350 years of observation, the origin and dynamics of planetary jet streams and vortices or planetary storms remain debated.

Shallow weather layer simulations have struggled to adequately reproduce the jet streams on Jupiter and Saturn, while previous deep-flow models have not reproduced vortices. Heimpel and his colleagues have taken this challenge to the next level, using fluid dynamics equations and supercomputers to produce more realistic simulations that give insight into the origin of both features. “One of the big questions we have is how deep do these structures go?” says Heimpel. “These storms are embedded in these jet streams, and there’s no solid surface to stop them. Our simulations imply that the jet streams plunge deep into the interior, while the storms are rather shallow.” Unlike great storms on Earth, which eventually lose steam after encountering land mass, planetary storms can continue for centuries.

“At its core, our research is curiosity-based, and our ideas are driven by observations. We have a wealth of those from NASA space missions and ground-based telescopes,” says Heimpel. “Now we want match the observations with the theory.”

Heimpel notes that he and his colleagues will push their research even further in the coming year with the Juno spacecraft arriving in one of Jupiter’s polar orbits in the summer of 2016 and the Cassini mission–in its final phase–moving into a polar orbit of Saturn in 2017. “These two missions will be key to verifying some of the predictions of our computer simulations. And more importantly, the missions will lead to new questions and controversies that we will address with ever more sophisticated analysis.”

Heimpel and his group at the University of Alberta are one of only a few teams in Canada that use high-powered supercomputers to solve problems in global atmospheric and interior dynamics of the planets. The group is part of Compute Canada, a nationalized system of resource-sharing across universities.

For this paper, Heimpel teamed up with two researchers–Thomas Gastine and Johannes Wicht–from the Max Planck Institute for Solar System Research in Germany. The findings, “Simulation of deep-seated zonal jets and shallow vortices in giant gas atmospheres,” were published in the journal Nature Geoscience.