You don’t need a green thumb to grow vegetables indoors.

On the contrary, there are plenty of indoor greenhouses that take the work out of growing plants, from the amount of water they get to the right dosage of light.

One of these indoor greenhouses — or automated growing systems, as they’re referred to — was created by six engineering students at Rice University. Aside from planting the seeds, the greenhouse does pretty much everything. It’s about the size of a small bookshelf and operates anywhere indoors.

“We didn’t want it to take up too much space in an apartment,” said Harrison Lin, a student who worked on the project. He said they wanted to “make it not intrusive, but it could still grow a useful amount of plants.”

There are push buttons on the device to designate how much light and water the plants get, and to determine the temperature inside it. If you’re feeling extremely hands-off, there are three pre-set options: leafy greens, roots and herbs. Select what you’re growing and go about your business.

“In the most ideal circumstance, you plant your seeds, put on the correct settings and walk away until it’s ready to harvest,” said Jack Kaplan, another student on the team.

Most indoor growing systems are hydroponic, meaning plants are planted in water mixed with mineral nutrients, but this one uses a soil trough for planting. LED bulbs provide the plants with the red-blue spectrum of light needed to grow. The only maintenance is refilling the water tank every three weeks.

The students built three of these indoor greenhouses as a senior project. They were installed at the HSB Living Lab, a residential research facility at Chalmers University of Technology in Sweden. 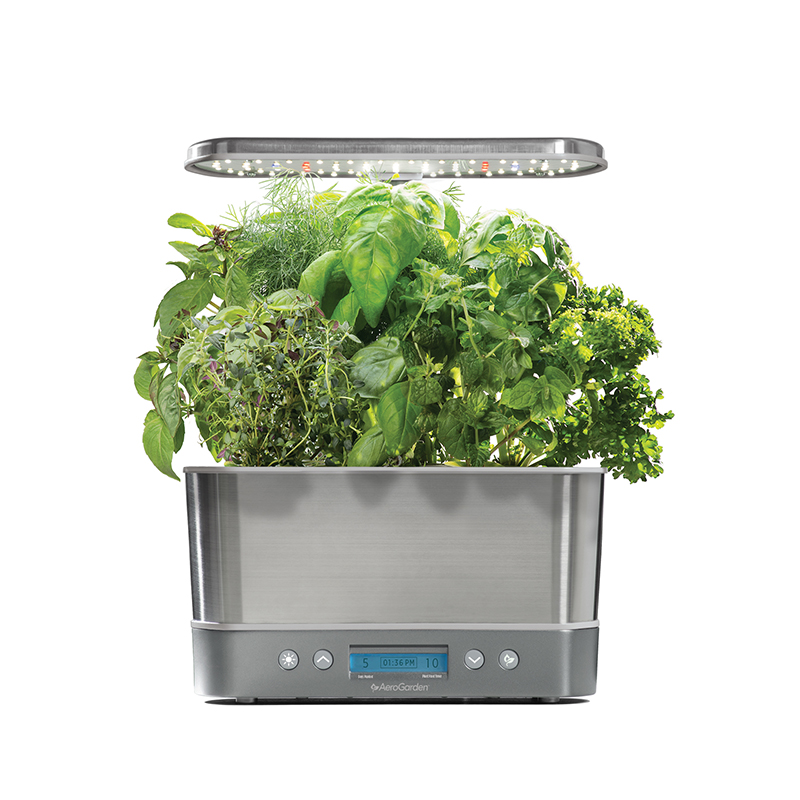 This undated photo provided by AeroGarden shows an indoor growing system called Harvest Elite made by Aerogarden. Such systems have become more popular in recent years as people want to grow fresh vegetables and herbs indoors. (AeroGarden via AP)

In 2017, indoor gardening was listed as a popular trend in a report by Garden Media Group, a marketing group that tracks industry. Apartment dwellers have less room for a traditional garden but still want fresh veggies.

Businesses are noticing the expanded interest in at-home gardening.

Aerogarden, owned by Scott’s Miracle Grow and the Hawthorne Gardening Company, is another automated in-home growing system on the market. It’s automated, hydroponic systems range in size and price point — the smallest retails for $99 and holds four plants, while the largest sells for nearly $700 and grows 24. Sales have grown over 20 percent year over year since 2013, and last year’s sales grew by more than 30 percent, according to company numbers.

Automated systems take the guess-work out of gardening, said Clydette Alsup-Egbers, an associate professor of plant science at Missouri State University. The biggest reason that indoor plants die, she said, is over-watering. If an automated system is used, that risk is eliminated.

“People who are new to growing don’t know what they’re doing,” she said. “A kit makes them feel more confident.”

Automating everything is what commercial greenhouses have done for years, said Julie Bare, an estate gardener at Meadowbrook Farm, located in Jenkintown, Pennsylvania, and owned by the Pennsylvania Horticultural Society.

Bare helps grow some of the hundreds of plants on display in the renowned Philadelphia Flower Show. To do this, greenhouses are necessary; the show is held annually in March, which means short days and cold temperatures.

Still, even the most seasoned gardener can run into problems with indoor vegetables.

A few years ago, George Rebeiro Brooks Jr., a retired mechanical engineer, tried growing lettuce in pots inside at his home in Tewksbury, Massachusetts. Brooks, who owns Green Hollow Orchards, has grown apples, tomatoes and other plants for local farmers markets for more than 45 years. But his indoor lettuce turned out limp, not crispy.

“It’s just my guess, but I think it didn’t have the right air circulation indoors to make it toughen up,” he said. 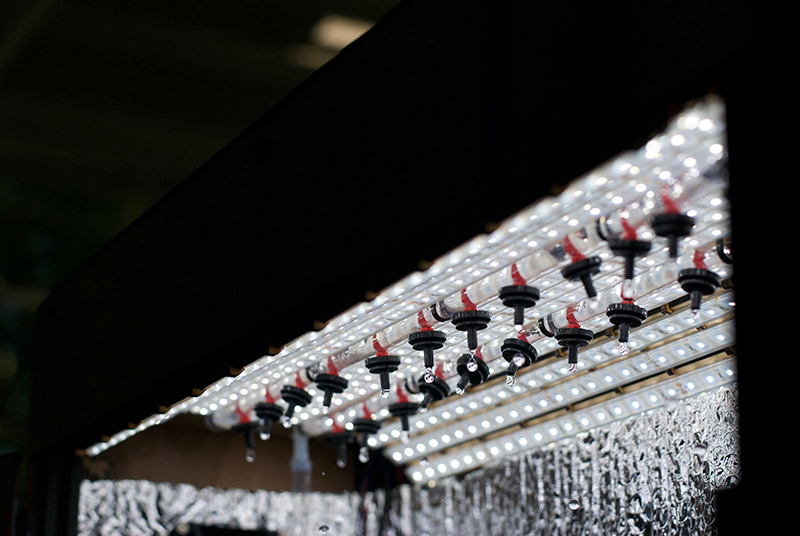 This undated photo provided by Harrison Lin shows the watering and lighting system inside the indoor greenhouse constructed by six engineering students at Rice University. The system measures water for specific vegetables and the lights provide the correct red-blue spectrum needed to grow plants. (Harrison Lin via AP)