Much of the talk in the automotive industry in recent years has been about the rise of the urban car.

Growing demand from consumers for these lightweight vehicles has been reported in Europe, the US and the booming BRIC economies of Brazil, Russia, India and China as well. As a result, car manufacturers worldwide are developing their own urban car models to tap into this burgeoning market.

An urban – or city – car is a small, lightweight passenger vehicle intended for use primarily in a built-up area. In Europe, such cars are normally known as “A-segment vehicles”, while in the US, they are generally termed “sub-compact”. In Japan, they are called “kei” cars and have been popular in the country since the 1950s.

The urban car has slightly different connotations according to size, seating capacity and engine capacity around the world. In Europe, there are no formal criteria to define A-segment automobiles, with classification based on comparison with other similar sized models.

However, in the US and Japan, vehicles must meet strict government-defined specifications regarding seating capacity, interior volume and engine size to be termed an urban car. For example, a Japanese kei car must be no more than 3,400 millimeters (mm) in length with a maximum engine displacement of 660 cubic centimeters (cc).

Worldwide demand for urban cars in the so-called Triad markets of US, Japan and Europe is projected to increase 55 percent by 2018, with sales in the BRICs swelling by 63 percent in the same period.

The urban car’s growing market share has been attributed to several key factors. A-segment cars have been popular in Europe for many years as a solution to congestion and lack of space in towns and cities. However, growing urbanization in North America and emerging nations is causing consumers in these regions to follow suit.

The on-going effect of the 2008 recession in the Triad markets as well as the boom in the BRICs has led to a rise in fuel costs. This has resulted in an increasing number of consumers looking for new smaller, more fuel efficient vehicles.

The economic difficulties in the US have also resulted in a new trend that has become known as “right-sizing”. Declining disposable incomes in the region mean that consumers are increasingly choosing cars that are sized to suit their needs, such as commuting, driving children to and from school and carrying the weekly shopping rather than simply selecting the largest or most prestigious model. For a rising number of Americans, aspiration is no longer the principal factor in car purchasing decisions.

In addition, international automobile manufacturers now have to comply with government legislation demanding carbon emissions reduction. For example, European Commission regulations that came into effect in 2012 state that vehicle manufacturers will face fines of at least 20 Euro for every gram of carbon dioxide (CO2) emitted over the limit of 130 gram/kilometer per car across their entire fleet of vehicles.

In 2015, the fine is expected to reach a staggering 95 Euro per gram. Vehicle weight reduction is an important step in enhancing fuel efficiency to meet these strict requirements for automotive manufacturers.

How are Manufacturers Meeting this Trend?

Responding to market demand for urban cars is not simply about producing ever smaller cars. Consumers in both developed and emerging economies still require space and comfort from the vehicles they purchase.

Car manufacturers are now actively lightweighting their vehicles to achieve the required fuel efficiency, through the use of plastics and aluminium as well as innovative composite materials in the car body, as well as the engine and car interior.

This smart design can be achieved by using lighter and smaller components such as composite bearings that offer the same strength and robustness, as those manufactured from traditional materials, at a fraction of the weight. Car companies are also developing new hybrid engines that consume less fuel as well as smaller Electric Power Steering (EPS) motors in steering systems.

To guarantee that new designs and mechanisms, made of lighter materials, work as well in automotive applications as traditional solutions, it is necessary to use components developed to enhance the material’s positive attributes and compensate for any potential performance issues. Even the smallest parts can make a big difference to the way the mechanism, and the car as a whole, functions.

For example, by using lightweight composite bearings with a self-lubricating polytetrafluoroethylene (PTFE) liner in applications such as the belt tensioner, automotive manufacturers can achieve the same consistent friction values and durability as with heavier rolling element bearings. By adding different filler compounds to the PTFE liner, composite bearing manufacturers can alter and control the friction and wear inside the bearing according to the automotive manufacturer’s needs.

In this way, a composite bearing can be customised to provide the low friction required in a belt tensioner or the slightly higher friction required in a door hinge to ensure smooth movement while preventing the door from swinging shut uncontrollably. Consistent controlled friction coupled with the composite bearing’s wear and tear resistance ensures the mechanism’s long life.

When used in steering racks and gears, composite bearings can enable car designers to reduce the weight of the power steering system while improving the driving experience for the motorist.

As well as being heavy, old hydraulic systems had a negative impact on fuel and operating efficiency, as their drive belts and pulleys continually drained power from the engine. 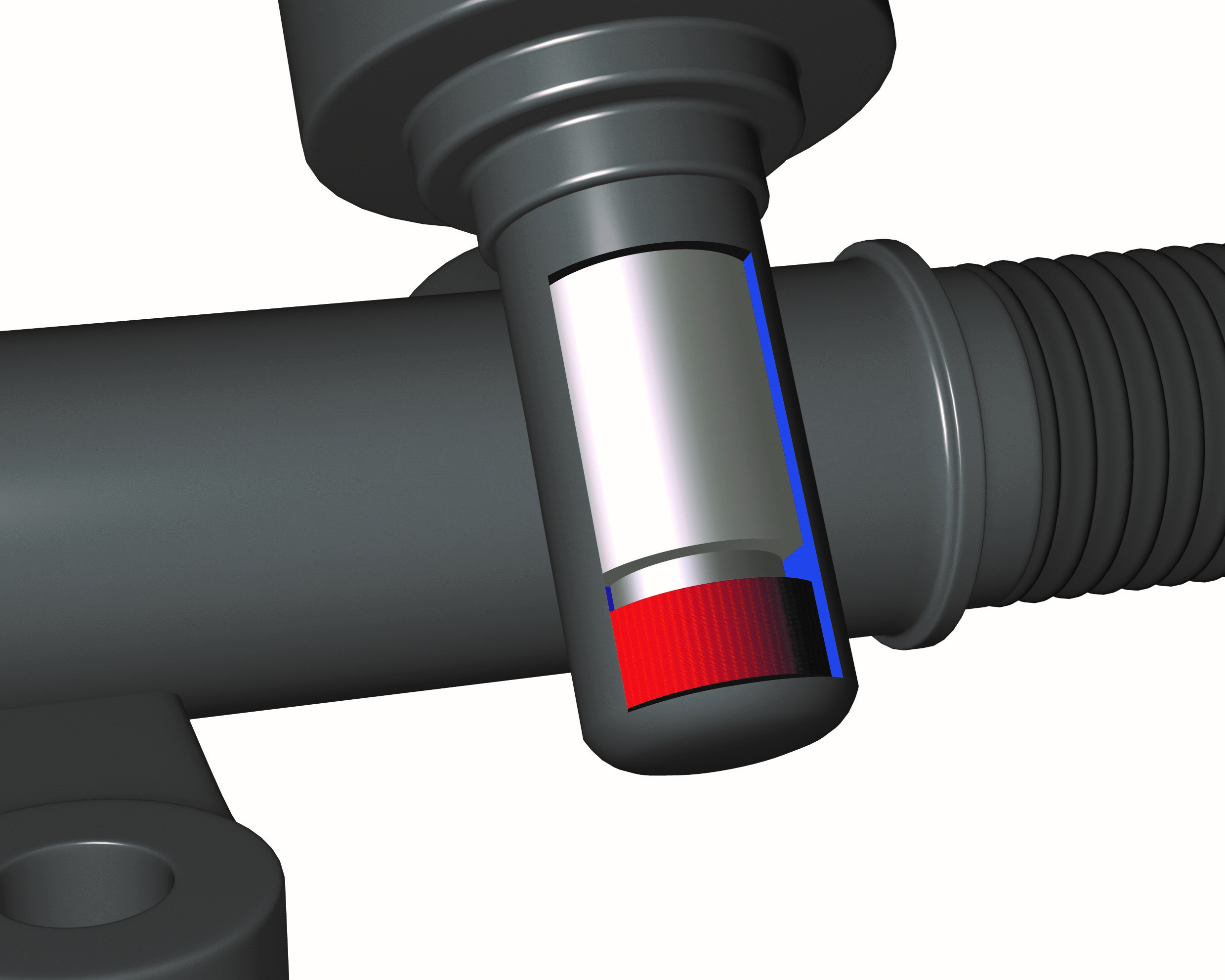 Composite bearings used in the yoke between the steering rack and pinion gear offer consistent lower friction values between the mating components over their lifetime than those traditionally used.

Composite bearings are used in the yoke between the steering rack and the pinion gear to minimise friction between the two components, ensuring the long life of the mechanism.

Increasingly, the engines of urban cars are being designed to take up less room in the car body to maximize the space available for passengers to enhance comfort.

As the individual mechanisms are much closer to each other in these compact engine designs, noise, vibration and, harshness (NVH) can be amplified and transmitted to the steering column, impacting driver experience.

Composite bearings, when used in powertrain mechanisms, such as the dual mass flywheel, can cushion and absorb NVH from the engine minimize its transmission to the passenger area of the car.

This enables automotive manufacturers to devote more car body space to the passenger area without risking an increase in obtrusive noise or vibration, resulting in a more comfortable, noise-free driving experience for the motorist and passengers.

Manufacturers are using a greater selection of lightweight alternative materials in powertrain and steering applications to help them reduce weight and meet CO2 reduction regulations.

However, these materials often have different thermal expansion rates from each other which can increase friction between mating components, reducing performance, and cause additional wear in the vehicle. Tolerance rings can be used to circumvent this.

The tolerance ring acts as a spring between the housing and the shaft allowing them to expand at different rates, ensuring a perfect fit between mating parts.

This can help vehicle manufacturers reduce NVH regardless of the varying expansion rates of the materials used, enabling them to use several different lightweight metals in the same component to help minimize overall vehicle weight without sacrificing performance. Additionally, relaxed tolerances eliminate the need for secondary machining operations, simplifying the assembly process.

Tolerance rings ensure a perfect fit between components made of materials of different expansion rates within a steel stator application fitted with a lightweight aluminium shaft.

The inert properties of the composite bearings’ PTFE liner combined with the selection of corrosion resistant materials that can be used in the backing enable manufacturers to combine steel components with those made of lighter materials used in the car body, such as magnesium.

This can minimize the threat of galvanic corrosion, which can adversely affect the lifetime of the vehicle. The use of tolerance rings and composite bearings to connect different materials in automotive applications can ensure that lightweighting and CO2 emissions reduction targets are met while minimizing the risk of corrosion for key components. This extends the lifetime of the car and helps to build brand loyalty with consumers.

Small is the Next Big Thing

The international automotive market will expand over the next five years. Despite on-going weakness in Europe and North America, the car market is showing remarkable recovery from the lean years of the 2008 recession. However, demand in Asia and South America is driving sales growth globally, particularly for the urban car.

In all major developed and emerging economies, the market share for small cars is expected to increase for the foreseeable future due to their unique ability to overcome current motoring challenges for cost-conscious, environmentally-aware and increasingly urbanized consumers.

A growing number of automotive manufacturers are choosing to launch their own urban cars to tap into this new area of growth. As they do so, it is becoming more and more necessary for brand owners, already offering urban car models, to adapt their design and technology to enhance fuel efficiency and performance and differentiate their products in increasingly crowded car showrooms.

Innovative components, such as composite bearings and tolerance rings can be used in a number of automotive applications to contribute to weight reduction efforts in passenger vehicles and maximize performance. Manufacturers making such small changes in design will ensure that their new automobile model will be the next big thing on the market.