When the team at California-based The Scenic Route was tasked with designing the rotating chairs on the TV show The Voice, they knew the contestants weren’t the only ones that would be in the spotlight. Although it was a simple application, the chairs required a degree of motion control that an older style shaft turner could not provide.

The chair needed to rotate 180° based on a button input. A simple motor drive could run the motor with no problem, but they needed a drive that could sense two end-of travel limit switches set 180° apart. Most older drives are analog based and simply work as voltage amplifiers. An analog command signal is sent, perhaps a 0-to-5 or 0-to-10 Vdc, and it produces a larger voltage to run a motor. Those drives are also limited in the amount of logic functions they can perform, because once they are designed, their functionality is set and cannot be changed. The drive used in this chair application is considered a “smart” drive because of its microprocessor. This processor can be reprogrammed to perform various different operations based on inputs. The micro based drives have the same programmable functionality as a stand-alone PLC, but also run a motor. 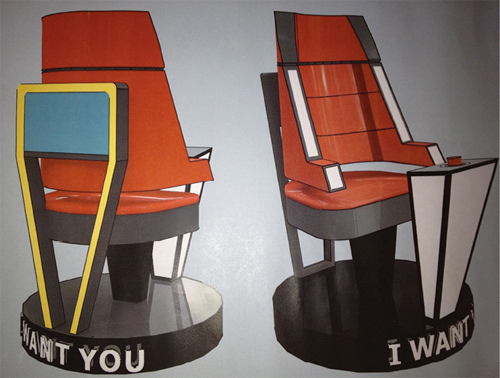 Smart drives can now perform positioning moves, run routines, accept sensors and communicate with other smart drives. Designing with an integrated motor has a number of benefits, including helping to reduce size, cost and complexity. This type of drive can also eliminate external controllers, like PLCs, and can reduce the amount of space required for a machine by consolidating components and eliminating cabling and possibly the need for entire enclosures. For these reasons, The Scenic Routes’ design team chose American Control Electronics’ RG501A smart drive—a full featured regenerative control with the built in brains of a PLC.

The motor drive requires two separate inputs, one to initiate clockwise rotation and the other to initiate counter clockwise rotation. Only one large button is displayed on The Voice chairs because that is the most important button in the whole application. It initiates travel when all of the judges are facing away from the artist.

The “rotate clockwise” button is connected to the input of the drive. That input is actually called “run forward,” but in this case, it determines what direction the chairs will turn. When that input is brought from high (5 V) to low (0 V), the logic card acknowledges the change of state and sends a signal to the drive.

The limit switches connect to the microprocessor input on the drive. When triggered, the end-of-travel limit switches cause a change of state on their respective input on the logic card. Resetting the chairs to the previous position would be accomplished by pressing a reserve pushbutton. The speed range of the motor drive is 60:1. This means that a typical 1,800-rpm motor can be ran as slow as 30 rpm. With additional gearing on the motor, the output shaft rpm can be much lower than that.

This application might be simple, but it comprises many of the facets of motion control that would have previously required several components to accomplish.