Sensors may be thought of as the traffic cops of the manufacturing world. Discrete sensors, such as proximity or photoelectric models, provide discrete or binary information to a PLC. If a package is moving down the assembly line, these sensors will detect its presence and signal back to the PLC indicating their position in reference to the package’s placement on the assembly line. Other types of sensors, such as pressure and level sensors provide more complex measurements. They are analog sensors, capable of determining the amount of pressure or the level of a substance in a container or closed area. They are also capable of sending an alarm when critical levels are reached.

From a maintenance point of view, sensors present a challenge because they are widely dispersed throughout a manufacturing, assembly or packaging application. Identifying the source of a failure when a sensor ceases to respond can be a difficult and time-consuming procedure. 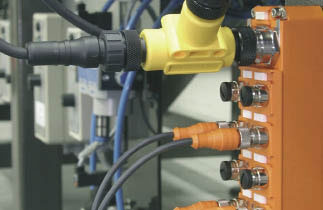 Traditionally, sensors were hardwired directly to a control panel, often a significant distance away. Sensors were delivered with pigtails, which were hardwired cables that were routed via conduit from the sensor itself to a central control panel. When a sensor (or the wire interfacing the sensor with the control panel) failed, it was necessary to remove and replace not only the sensor, but the entire cabling package. Sensors always have been delicate enough that replacing them was, and still is a fairly common occurrence. But sensor replacement may bring vital machinery to a halt during the process.

Recently, sensors were introduced with connectors (typically 8 or 12 mm.) that enabled them to be quickly disconnected from the cabling and replaced with equal speed. A job that could have taken up to an hour could now be accomplished in a matter of minutes. However, until the introduction of distribution blocks (also called enclosure-less I/O blocks), it was still necessary to run multiple cables attached to individual sensors through conduit. Troubleshooting could still be time-consuming.

Distribution blocks placed in close proximity to sensor deployments make installation and maintenance even easier, and with a significant cost savings. Now, instead of having an extended cable run for each sensor, sensors are connected into a distribution block using shorter 1 to 2 meter cordsets. These double-ended cordsets reduce installation and repair time even further. They are manufactured and tested at the factory, eliminating the potential for faulty hand-wired connections on-site and enabling cord replacement in a matter of seconds.

Distribution blocks can be passive or active. Passive enclosure-less I/O blocks run a single cable back to the control panel. Active (or smart) enclosure-less I/O blocks contain a fieldbus connection such as EtherNet/IP or PROFINET that enables two-way communications between the I/O block and the PLC. Fieldbuses link PLCs and remote terminal units (RTUs) to the components that actually perform the work—such as sensors, actuators, switches, or valves.

The active distribution block sends signals from multiple sensors back to the control panel over a single cable. Given a typical factory scenario—where a cable run from a sensor is 10 meters and 8 to 16 sensors need to be attached to a control panel—this represents a savings of 150 meters of cable. There is also a significant reduction in hours required to install cable initially or replace individual cables when failures occur somewhere between the sensor and the control panel. Active distribution blocks also provide information on the source of the failure. The benefits of an enclosure-based system add up to faster ROI, although there is concern that the cost of purchasing a streamlined enclosure-less solution may be higher than an enclosure-based one. The initial cost is somewhat displaced by reduced installation costs and the first time there is a failure in a cordset or a sensor, most manufacturers find that the savings more than pays for front-end expense. Unfortunately, the initial cost differential can be enough to discourage contractors from building an enclosure-less approach into a bid unless specified in the RFP. It is incumbent upon managers to educate their purchasing departments on the relative benefits of enclosure-less systems and specifically request them in the bids to keep the playing field even.

Hidden costs during installation often do not show up in a bid. These are the unplanned but necessary troubleshooting during installation that occurs when the I/O modules (typically remote PLC I/O) are wired to terminal blocks in the enclosure, which then must be field-wired to the sensors and actuators during startup. It is possible that terminals may become loose inside the panel during shipping, which means that to ensure successful installation; the terminals must be subjected to close inspection and screw retorquing. In addition, the field wiring to the individual sensors and actuators may not be done perfectly. Either of these situations will create a delay as technicians take time to troubleshoot the problem. A streamlined system using on-machine I/O is faster to install because it’s fully assembled.

When determining the ROI of an enclosure-less system, operational costs take precedence over purchase price. Assume that downtime in an industrial environment runs $1000 per minute in high-speed machine/conveyor operations (in some industries it can be much higher). In a streamlined enclosure-less system where short cordsets terminated by quick disconnect connectors can be easily replaced—or when sensors fail, the cordset can be rapidly attached to a replacement sensor; a repair crew can have the system working again in minutes. If it takes the crew 30 minutes to rewire the device back to a terminal block, the operation has lost $30,000. Streamlining pays for itself the first time the plant suffers downtime.