If you don’t like wandering through big-box stores trying to find the furniture you need, and then struggle to assemble it, researchers have proposed a solution: Smart software that helps you design your own furniture, 3D print the joints and assemble the whole structure at home.

“This work has implications for changing how the supply chain works,” said Karthik Ramani, Purdue University’s Donald W. Feddersen Professor of Mechanical Engineering. “A tool like this turns consumers into producers.”

The researchers presented the tool, called “Shape Structuralizer,” at the 2019 ACM CHI Conference on Human Factors in Computing Systems in Glasgow, Scotland on Monday (May 6).

There’s one problem: The industries for such a tool – a way to pick up parts to 3D print your designs or have the parts shipped to you – don’t exist yet.

“We don’t know yet what form the ideas we have demonstrated will take when they’re available to consumers. But we’ve demonstrated one way that a tool can adapt to the user rather than the other way around,” Ramani said. “This would localize manufacturing and cut tedious steps between design and fabrication.”

Shape Structuralizer is a step toward creating these industries by making structure design “open-source,” similarly to how Apple provides a platform for anyone to make apps, or how Tesla made its patents on electric car technology freely available to the public.

Open-source technology has been trending with the so-called “maker movement,” in which people design or invent their own services and products.

Ramani’s C Design Lab works on ways to connect the maker movement to manufacturing. His team develops algorithms that increase the usability and efficiency of designing 3D-printed objects, such as a tool for building structures made out of cardboard or a platform that is a self-contained 3D printer.

Current tools for structure design and analysis, such as computer-aided design (CAD) and finite-element analysis (FEA), require a lot of knowledge and training to use. They also don’t have built-in assistance for someone with no engineering or architectural background. This prompted Ramani’s lab to create Shape Structuralizer.

With Shape Structuralizer, a user first scans or imports a shape into the program. Then the tool guides and validates the design, automatically estimating the weight or forces that each part of the structure could take on, ranking alternative designs and calculating the size of connectors within a scaffold of what will become a complete structure.

The researchers found that study participants with little experience in design or fabrication could still build a structurally sound object, such as a bookshelf with 3D-printed joints, in under 35 minutes. 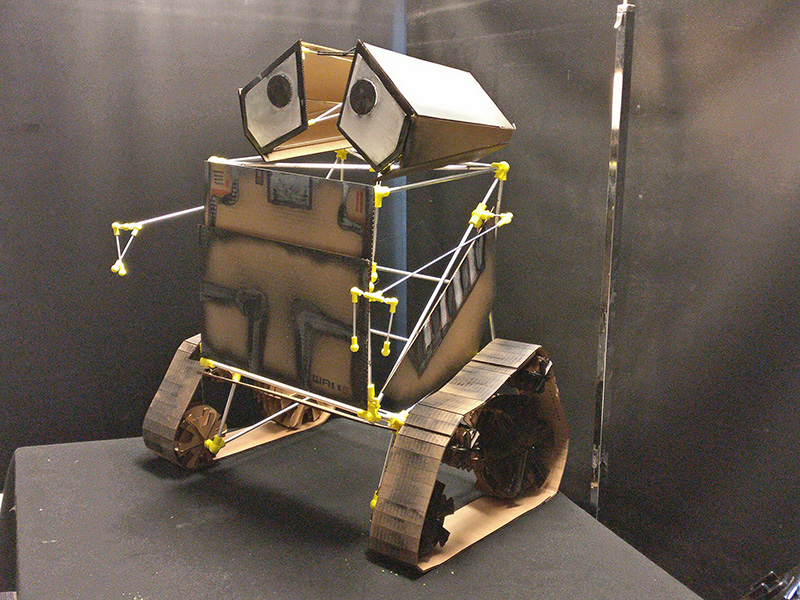 Someone with no structure design or fabrication experience could create a shape, such as Disney’s WALL-E, using a tool developed by Purdue researchers. (Purdue University image/ Subramanian Chidambaram)

While intended to make 3D printing and structure design more accessible to the general public, these tools also simplify the workflow for those wanting to specialize in design and fabrication. Shape Structuralizer, for example, combines the expertise of multiple fields into a single system, which makes furniture design faster and more efficient.

“We want to empower anyone to design structures – and ensure that they are structurally sound,” Ramani said.