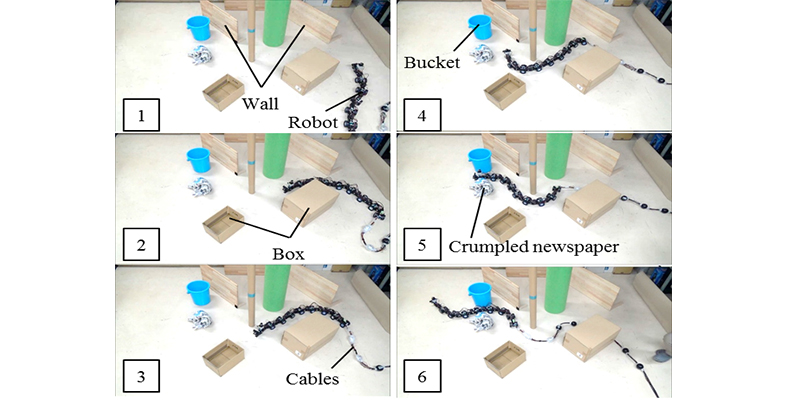 Motion of the robot using both range sensors and map in field C.

Rescue operations at disaster scenes often use robots to avoid further human danger. Modelling robots on snakes can provide better access through narrow paths in rubble, but previous models that control snake robots by the head do not adequately avoid collisions between the body of the robot and surrounding obstacles. Researchers at the University of Electro-Communications and Kyoto University have now demonstrated an improved control system for avoiding collisions along the full length of snake robots.

Motoyasu Tanaka, Kazuyuki Kon and Kazuo Tanaka consider a snake robot comprising a series of sections joined by links that either pitch up and down or yaw through sideways turning angles. An operator controls the velocity of the first link with a joystick. Previous results demonstrated motion control using passive wheels that prevent sideways slipping. These wheels provide the side friction force required for the robot to slither forward, and by lifting the wheels out of contact with the terrain at a particular link, the direction of motion can be adapted to avoid collisions between an obstacle and the body of the robot.

Tanaka, Kon and Tanaka have now demonstrated the ability to navigate not just one but a series of obstacles in unfamiliar environments, by incorporating range sensors and map generation with semi-autonomous control at each link.

“The experimental system, which has range sensors and the function generating environmental map using simultaneous localization and mapping, was developed with decreasing calculation cost,” explain the researchers in their report, highlighting the computational optimization of the control algorithm. Experiments with the snake robot verify how effectively their control system performs in unknown environments.