Opto 22 has announced SoftPAC(tm), a software-based programmable automation controller (PAC) ideal for use with computationally intensive applications as well as applications that must log, manipulate, and exchange large amounts of data. SoftPAC joins Opto 22’s existing SNAP PAC family of standalone and rack-mounted PAC controllers so automation professionals can choose the best PAC-either hardware- or PC-based-for their applications.

SoftPAC takes advantage of a PC’s computational speed to quickly execute the complex logic and calculations that automation professionals encounter. As a PC-based controller, SoftPAC also takes advantage of a PC’s file handling and networking capabilities to enhance data acquisition and monitoring applications that log, manipulate, and exchange large amounts of data.

As a PC-based controller, SoftPAC can also reduce costs for machine builders and OEMs who integrate a PC into their products. Running SoftPAC on the PC already built into the machine not only avoids the cost of a separate, hardware-based controller but also saves valuable space inside compact machines. 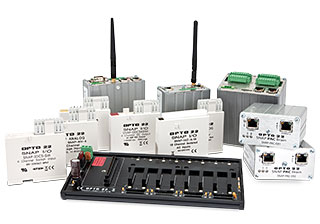 SoftPAC is programmed with the PAC Project(tm) software suite just like Opto 22’s standalone (S-series) and rack-mounted (R-series) PACs, and a control program developed for one PAC can be run on another one with almost no modification. Like hardware-based PACs, SoftPAC can be used with any Opto 22 SNAP I/O unit that uses an Ethernet-based I/O processor, or “brain.” Hardware-based PACs have a fixed amount of RAM for program memory and logic-16 MB or 32 MB, depending on the model-while SoftPAC, drawing on PC RAM, can provide up to 64 MB RAM.