Researchers have announced a project they say could fundamentally change the design and installation of wind blades, bring the cost of wind energy in-line with fossil fuels and allow for more developments in moderate wind-speed markets.

The project hinges on a design that wraps tensioned architectural fabric around a metal space frame, much like early aircraft wings. It’s estimated that to achieve the national goal of 20% wind power in the U.S., wind blades must be 50% longer, a figure that would be almost impossible with current manufacturing methods. The proposed design would simplify production of blades exceeding 120-m long, and because they could be assembled on site, they can reduce transportation costs. 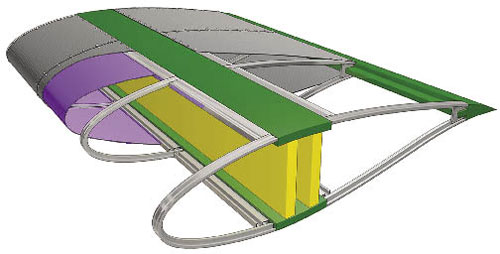 The cutaway depicts a new manufacturing concept for wind blades that would entail covering a steel frame with tensioned fabric. This approach could significantly reduce production costs and make wind more economical.

A collaboration among GE, the Virginia Polytechnic Institute and State University, and the National Renewable Energy Laboratory, researchers hope to demonstrate the technology by 2015. According to GE, the design could reduce blade costs from 25% to 40%.

“We want to bring costs down to a point where we are no longer so dependent on [incentives],” said Wendy Lin, a principal engineer at GE. “If we can do that, the U.S. industry will be more consistent and blade suppliers will grow in a more stable fashion.”

The use of fabrics to reduce weight and provide cover dates back to World War I, when it was used on airplanes. Similar structures are used in recent architecture. The unmistakable aesthetic of the Denver International Airport is built with fabric.

The fabric and spaceframe design has already found work in the wind industry. GE has used it to construct some towers because of its lighter weight and lower cost. Researchers are beginning the blade project with commercially available fabric, but as research progresses, Lin expects changes to the fabric’s composition.

Wrapping a steel frame with a fabric presents other cost savings: The clamshell molds that shape fiberglass into turbine blades cost millions to build and are part of an expensive and sensitive production process. The proposed blade architecture will be built as resilient as fiberglass, made to work for 20 years without regular maintenance to the tension on the fabric.

Still, researchers have a lot of work ahead of them. For instance, they are unsure how such blades will respond to lightning strikes. Lin says there are tradeoffs for every type of technology. While the steel frame may be a complicating factor, the fabric would be easy to replace in the event of damage. Another characteristic to consider: How will the aerodynamic qualities of a fabric blade differ from that of conventional designs?

“Developing larger wind blades is the key to expanding wind energy into areas we wouldn’t think of today as suitable for harvesting wind power,” Lin said. “Tapping into moderate wind speed markets, in places like the Midwest, will only help grow the industry in the years to come.”