Hayabusa2 caught my attention because of the little Twitter community of spacecraft it attracted: NASA’s official account for the OSIRIS-REX asteroid probe congratulated Hayabusa2 on performing a near-Earth flyby, and Hayabusa’s asteroid lander, MASCOT, has its own account too. These talkative craft were chatting about a flyover at an altitude of 3,090 km, which was performed in order for the Japanese space agency JAXA to confirm that Hayabusa2 was operating well.

The Hayabusa2 is now on its way to Asteroid 1999 JU3, where it will look for organic materials that could help explain the origin and evolution of the solar system and the materials in it.

It follows from the original Hayabusa, an asteroid lander that operated from 2003 to 2010, and returned material from an asteroid to Earth. Hayabusa2’s technology is fundamentally the same, with some new developments that were added in the intervening development time. Hayabusa2’s antennae will be flatter than the original, instead of having a parabolic shape. Hayabusa2 is also equipped with a digging device that can create a small crater in the asteroid and acquire samples from inside, giving researchers a look at interior material not weathered by the environment of space, as well as allowing them to study the effects of an object colliding with the asteroid.

Like its predecessor, Hayabusa2 is designed to carry samples back to Earth once its mission on the asteroid is completed. It launched on Dec. 3, 2014 and is scheduled to reach the asteroid in 2018. Then, it will stay there for one and a half years, and ideally come back to Earth in late 2020. 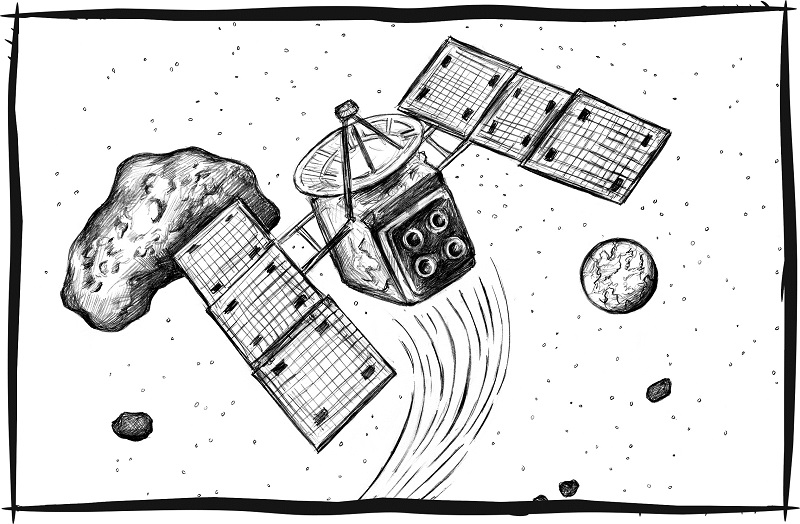 This week’s illustration shows Hayabusa-2’s predecessor. The most noticable differences are the lack of a second antennae or impact mechanism.

It was made in partnership with the United States, Australia, and Europe. NASA contributed its outer space communications network, the German Aerospace Center (DLR) is in charge of the robotic MASCOR lander, and when the craft will return to Earth with its payload its will land in Australia. Additionally, a near-infrared imaging microscope on board MASCOT was developed by France’s space agency.

In an interview in 2014, Hayabusa 2 Project Manager Hitoshi Kuninaka talked about some other upgrades. One of the most visible is the second antenna, despite which, Kuninaka noted, the Hayabusa2 is still half as heavy as its predecessor.

“Hayabusa was the first successful attempt at a practical application of this technology, and since then we have further improved performance. In addition, the first explorer could only send and receive X-band (8 GHz) signals, but the new one can also communicate along the Ka-band (32 GHz). Thus the explorer will be able to send large volumes of data to Earth,” he said, as quoted on JAXA’s website.

The Hayabusa2 has more sophisticated autonomous navigation technology than its predecessor, enabling it to make more decisions – and more sophisticated decisions – on its own. When it reaches 100 meters from the asteroid, those autonomous systems will take over from the operator on Earth. If they didn’t, it would take 40 minutes for the operator’s commands to reach the craft.

“And the landing process will be an improvement from the last mission: rather than landing wherever it can, Hayabusa2 will decide where it wants to land,” Kuninaka said.

Exploring the asteroid is only one of its goals: the other is to demonstrate that that autonomous navigation works.

The project was a difficult one, Kuninaka said, because the budget was not completed until two and a half years before the launch date. Additionally, the development was very strict, with every single design change going through a rigorous process of “configuration management.”

While it flew by Earth, Hayabusa2 snapped some pictures of our home planet. As it continues on its journey, there are sure to be more tweets – and more tests for the new technology.