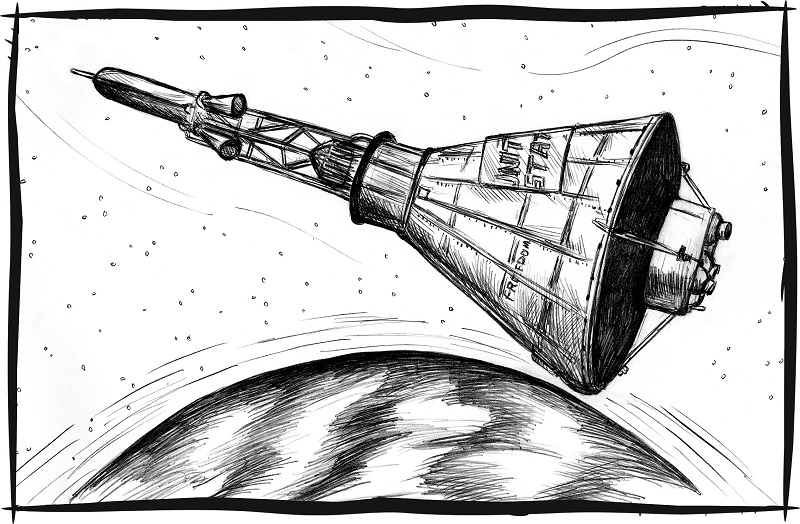 The first American in space made it there in 1961, aboard the single-seat Mercury spacecraft, a marvel of engineering that was cutting-edge at the time and kept America competitive in the Space Race against the Soviet Union. While we’ve come much farther in space technology now, the Mercury capsules – and the rockets that lifted them – were where it all began.

The craft was designed by Maxime Faget and other engineers in the early days of NASA, and the contract to build the capsule was awarded to McDonnell Aircraft Corporation. The Mercury capsule flew six spaceflights in total: a seventh planned flight was cancelled when astronaut Deke Slayton suffered an irregular heartbeat. Four of those flights went into orbit, while the first two were suborbital flights that proved NASA’s capacity to send astronauts past the limits of Earth’s atmosphere.

NASA had only existed as a civilian space agency – as opposed to the federal research agency National Advisory Committee for Aeronautics – for six months when it chose the seven astronauts that would make history with Project Mercury. It had already succeeded in putting the first American satellite in space, and in 1961, also succeeded in the first crewed American mission to space.

The Mercury capsule, a two-meter long cone covered with an ablative heat shield, was designed for a single crew member operating mechanical controls. The heat shield, an aluminum honeycomb covered with several layers of fiberglass, could withstand the 3,000 degree temperatures that occur in reentry. Three rockets were also deployed during reentry, used for braking. Near the crew compartment were the environmental controls, which supplied oxygen and heat and collected bodily waste. The long ‘tail’ of the craft contained antennas used for both communication with the ground and for orienting the spacecraft itself.

At the very end of the antenna array was the launch escape system, which contained small rockets which could be fired in case of a launch failure. The parachute to assist the capsule in its landing at sea was also stored in this area.

The astronauts who would fly the craft contributed to the design, asking for manual control and a window. Since it was the first craft of its type, the Mercury capsule underwent rigorous testing to assure that not only was the craft safe, but that human space flight was possible at all. Two chimpanzees and a rhesus monkey flew suborbital flights in the capsule before any human astronauts did. The effects of weightlessness on humans and animals needed to be studied, as did the rocket-powered boosters needed to propel a craft out of Earth’s atmosphere.

Those rockets were also rigorously tested. In the end, both suborbital flights launched on a Redstone rocket, and the four orbital flights used an Atlas rocket: both types were originally designed as missiles. Their first tests weren’t successful, with the first Atlas rocket to launch with a Mercury capsule exploring, and the first Redstone launch rising only about four inches off the launch pad.

The six piloted flights were a success, though, and marked the beginning of the Space Age. There were still some problems: during the last Mercury flight, called Faith 7, a power failure struck and forced the mission to abort sooner than expected. Astronaut Gordon Cooper took manual control and calculated the correct angle for re-entry based on star patterns, bringing the capsule down essentially by eye. Famously calm, Cooper was the last Mercury astronaut – and the first person to sleep in space.

Mercury started the American space program, paving the way for the two-person Gemini program and, eventually, Apollo. The journey to the moon and beyond all started here.