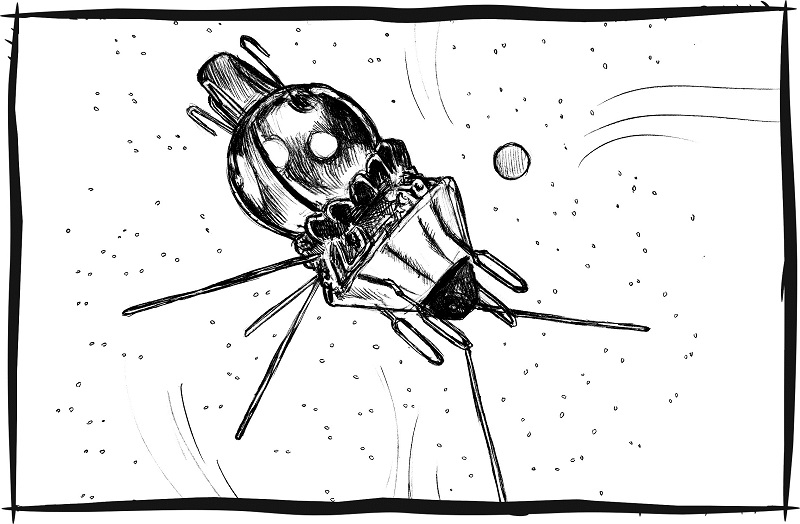 Earlier this week marked the anniversary of a first in space flight history. The Soviet Union’s Voskhod 1 was the first craft to carry more than one person into space, launching three cosmonauts from the Baikonur Cosmodrome on Oct. 12, 1964.

Partially, the craft was its own experiment: it was developed in the midst of the Space Race in order to test the capabilities of a group of cosmonauts working together with different specialties. To this effort, pilot Vladimir M. Komarov, physician Boris B. Yegorov, and scientist Konstatin P. Feoktisov worked together, and performed a medical-biological study during the one-day flight.

This was also the first mission during which a spacecraft’s life support system was considered reliable enough that the crew did not have to wear space suits. Instead, they were equipped with overalls.

The launch vehicle was a modified SS-6 (Sapwood) rocket. The Voskhod 1 followed on the Vostok, Russia’s first generation of crewed spacecraft, at the time when Russia was jockeying with the United States’ Gemini Project in the Space Race. The designer of the Vostok, Sergei Korolev, redesigned his two-seat craft to fit three people.

The biggest challenges to modifying the Vostok interior for the Voskhod project were the weight and the room for the crew. Korolev improved both by removing the ejection seat. The sealed spacecraft meant that the astronauts could fly without bulky pressure suits, which also saved space. However, lack of an ejection apparatus meant the craft would have to come back down to Earth using a soft landing system. A second parachute was added to the Vostok’s reentry capsule, and a rocket-powered system in the parachute shroud lines reduced the craft’s velocity as it landed. Reportedly, this worked well: the cosmonauts didn’t feel any impact at all upon landing.

Besides the change in seating and addition of the rocket used for landing, the Voskhod was otherwise built in the same configuration as the Vostok. The central descent module held the cosmonauts and instruments, while a second module contained the chemical batteries, orientation rockets, and main retro system. This module was separated from the crew cabin on descent.

With both of these flights, Russia made history and took the lead in the Space Race, pressuring the United States to progress forward. The Voskhod 1 was followed by the Cosmos 57 and nearly identical Voskhod 2, which enabled the first spacewalk in March 1965.