SpaceX’s swanky new crew capsule made an old-fashioned splashdown in the Atlantic on Friday, ending a six-day test flight to the International Space Station.

The Dragon capsule pulled away from the orbiting lab early Friday. Six hours later, the capsule carrying a test dummy parachuted into the ocean, a couple hundred miles off the Florida coast.

SpaceX employees cheered and applauded at company headquarters near Los Angeles when the red and white parachutes popped open. NASA televised the descent live, the dramatic views coming from a plane. The crowd went wild when splashdown occurred on time and the capsule was seen floating upright.

“I’m kind of shaky and I’m super excited,” said Benji Reed, SpaceX’s director of crew mission management. “It was an incredible journey to get to this moment.”

It was the first time in 50 years that a capsule designed for astronauts returned from space by plopping into the Atlantic. Apollo 9 — which orbited Earth in preparation for the moon landings — splashed down near the Bahamas on March 13, 1969.

Space station astronauts have been stuck riding Russian rockets since NASA’s shuttles retired eight years ago. NASA is counting on SpaceX and Boeing to start launching astronauts this year. SpaceX — which has been delivering station cargo for years — is shooting for summer.

Friday morning’s splashdown was the final hurdle of SpaceX’s test flight. While improvements still need to be made, the company aims to fly NASA astronauts Bob Behnken and Doug Hurley on the next demo flight. 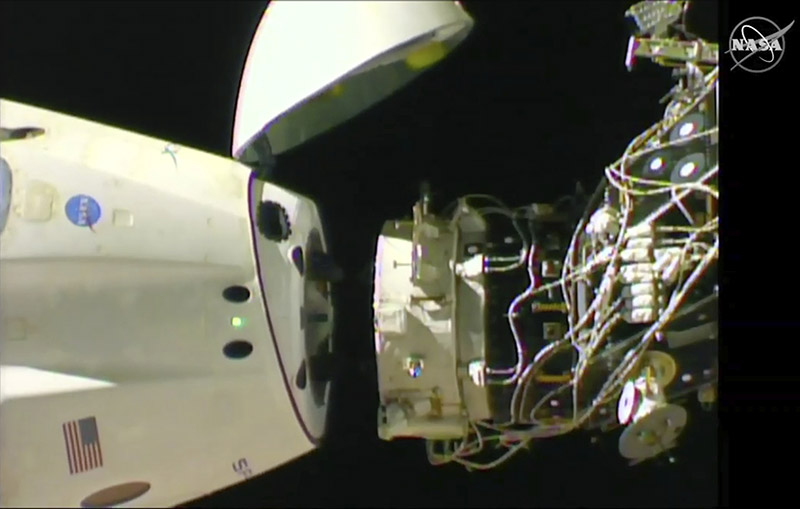 In this image taken from NASA Television, SpaceX’s swanky new crew capsule undocks from the International Space Station Friday, March 8, 2019. The capsule undocked and is headed toward an old-fashioned splashdown. The Dragon capsule pulled away from the orbiting lab early Friday, a test dummy named Ripley its lone occupant. (NASA TV via AP)

A pair of recovery ships was stationed in the Atlantic well before splashdown and quickly moved in, ready to lift crew Dragon from the water and return it to Port Canaveral.

All this is “leading to a day where we are launching American astronauts on American rockets from American soil,” said NASA Administrator Jim Bridenstine.

Boeing plans to launch its Starliner capsule without a crew as early as next month and with astronauts possibly in August. The Starliner is designed to land on land — in the U.S. Southwest.

Canadian space station astronaut David Saint-Jacques was the first to enter the Dragon capsule and the last to leave this week. He found it “very slick” and called it business class.

NASA’s Bridenstine considers privately built and operated spacecraft the way to go when it comes to rides to the space station. NASA awarded the first contracts in 2014 to SpaceX and Boeing, now totaling about $8 billion. This first SpaceX test flight opens a new era, Bridenstine said, with new technology and new business approaches.

SpaceX acknowledges some capsule systems need more work before Behnken and Hurley climb aboard for liftoff, as early as July. Vibration, acoustic and other measurements were taken throughout the recently completed flight, not only of the capsule but also the mannequin — named Ripley after the lead character in the “Alien” films — which was strapped into one of the four seats.

A small blue and green plush toy shaped like Earth — which SpaceX chief executive Elon Musk termed a zero-gravity indicator — was left behind on the space station. Behnken and Hurley will bring it back on their flight. 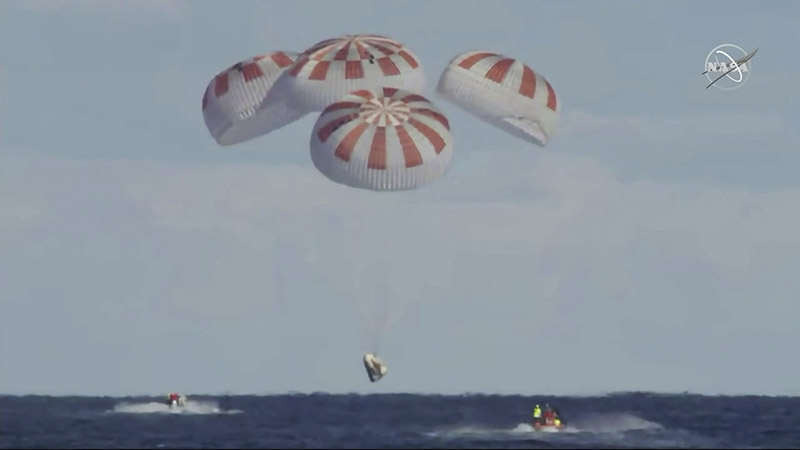 This image provided by NASA shows SpaceX’s Dragon capsule carrying a test dummy splashed down into the Atlantic ocean off the Florida coast, Friday, March 8, 2019. It marks the first time in 50 years that a capsule designed for astronauts returned from space by plopping into the Atlantic. (NASA via AP)