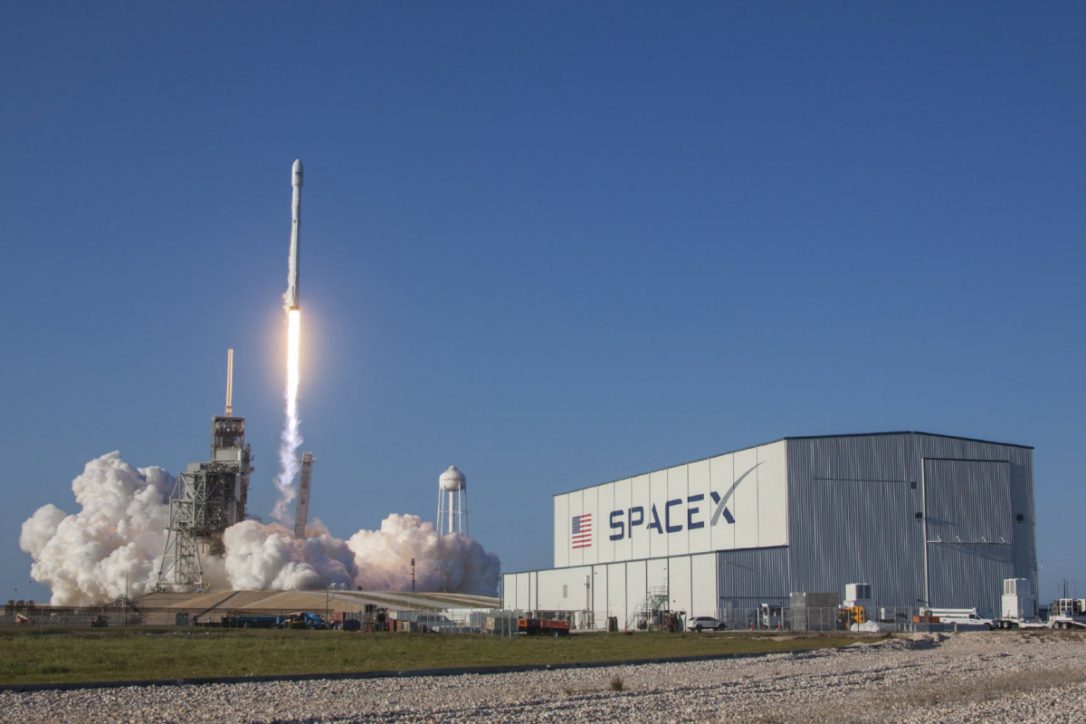 SpaceX successfully launched and then retrieved its first recycled rocket Thursday, a historic feat and the biggest leap yet in its bid to drive down costs and speed up flights.

It was the first time SpaceX founder Elon Musk tried to fly a booster that soared before on an orbital mission. He was at a loss for words after the Falcon 9 core landed on the bull’s-eye of the ocean platform following liftoff with a broadcasting satellite, achieving what some had once told him was impossible.

“This is a huge day. My mind’s blown, frankly,” Musk said. He called it an “incredible milestone in the history of space” and predicted, “this is going to be a huge revolution in spaceflight.”

Musk foresees dozens if not hundreds of repeat flights for a booster and rocket turnarounds of as little as 24 hours, perhaps by next year. Land, refuel and then back up again, with everything leading to one day putting humanity “out there among the stars.”

This particular first stage landed on an ocean platform almost exactly a year ago after a space station launch for NASA. SpaceX refurbished and tested the 15-story booster, still sporting its nine original engines. It nailed another vertical landing at sea Thursday once it was finished boosting the satellite for the SES company of Luxembourg. SpaceX employees jammed outside Mission Control at the Hawthorne, California, company headquarters cheered loudly every step of the way — and again when the satellite reached its proper orbit.

Longtime customer SES got a discount for agreeing to use a salvaged rocket, but wouldn’t say how much. It’s not just about the savings, said chief technology officer Martin Halliwell. He called it “a big step for everybody – something that’s never, ever been done before.”

“Absolutely astounding,” Halliwell said after his company’s satellite reached the proper orbit. “Just opened the door into a whole new era of spaceflight.”

SpaceX granted SES insight into the entire process of getting the booster ready to fly again, Halliwell said, providing confidence everything would go well. SES, in fact, is considering more launches later this year on reused Falcon boosters. At a news conference, Musk personally thanked Halliwell for having faith in SpaceX.

“You’ve got to get away from the idea that it’s secondhand,” Halliwell told reporters. “Flight proven,” Musk quickly added, his preferred term.

Boosters — the most expensive part of the rocket, according to Musk — typically are discarded following liftoff, sinking into the Atlantic. SpaceX began flying back the Falcon’s first-stage, kerosene-fueled boosters in 2015; it’s since landed eight boosters, three at Cape Canaveral and five on ocean platforms — actually, six times at sea counting Thursday’s redo.

On Thursday, the company even managed to recover the Falcon’s $6 million satellite enclosure, which used thrusters and parachutes to drop into the Atlantic. Until Thursday, trying to retrieve the second stage used to get the satellite into the proper, high orbit seemed like a “Hail Mary” pass, Musk said. But no more.

Musk said this day was 15 years in coming and that, all told, the reusability effort has cost the company at least $1 billion, which will take time to recoup. He brought all five of his young sons to the launch — and the news conference that followed — wanting them to be witness to history-in-the-making. It was fitting, he noted, that the rocket took off from NASA’s Launch Complex 39A at Kennedy Space Center, the starting point for the Apollo moon shots decades ago.

Blue Origin, an aerospace company started by another tech billionaire, Jeff Bezos, already has reflown a rocket. One of his New Shepard rockets, in fact, has soared five times from Texas. These flights, however, were suborbital; in other words, nothing went into orbit.

NASA also has shared the quest for rocket reusability. During the space shuttle program, the twin booster rockets dropped away two minutes into flight and parachuted into the Atlantic for recovery. The booster segments were mixed and matched for each flight.

As for this SpaceX reused booster, Halliwell said engineers went through it with a fine-toothed comb following its liftoff in April 2016. SES had special access; the satellite provider, after all, has a long history with SpaceX. A SES spacecraft was on board for SpaceX’s first commercial satellite launch in 2013.

Halliwell wasn’t so sure, though, about the cleaning job. “It’s a bit sooty,” he said with a smile.

Given its historic mission, the booster will not fly again, Musk said, but rather remain at Cape Canaveral for viewing.

SpaceX – which aims to launch up to six reused boosters this year, two of them with the yet-to-fly, super-sized Falcon Heavy in late summer – is familiar with uncharted territory.

Besides becoming the first commercial cargo hauler to the International Space Station, SpaceX is building a capsule to launch NASA astronauts as soon as next year. It’s also working to fly two paying customers to the moon next year, and is developing the Red Dragon, a robotic spacecraft intended to launch to Mars in 2020 and land. Musk’s ultimate goal is to establish a human settlement on Mars.

Key to all of this, according to Musk, is the rapid, repeating turnaround of rockets – and employees. SpaceX posted a help wanted ad on its webcast following the launch.