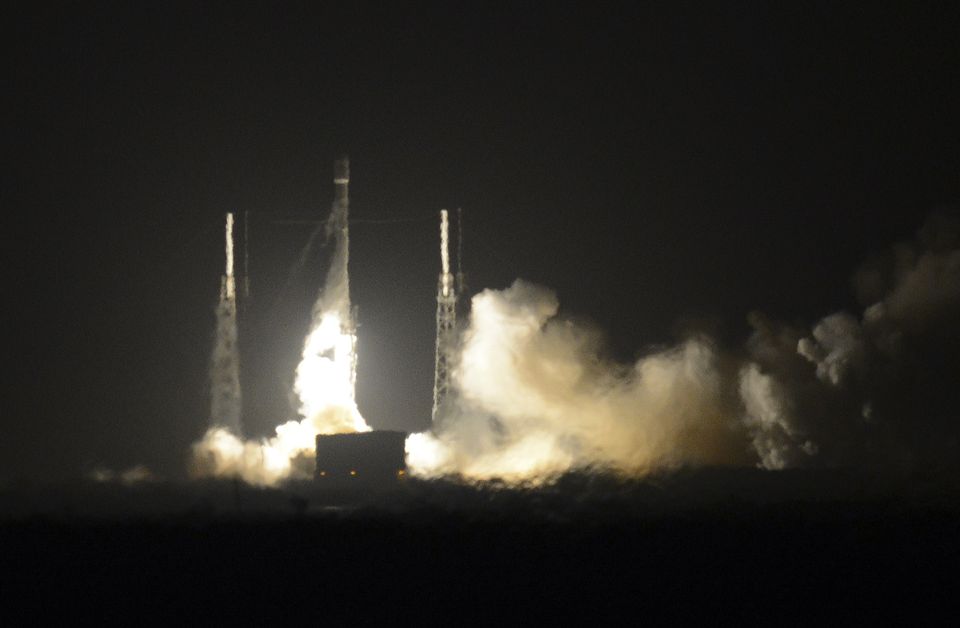 SpaceX sent a Falcon rocket soaring toward orbit Monday night with 11 small satellites, its first mission since an accident last summer. Then in an even more astounding feat, it landed the 15-story leftover booster back on Earth safely.

It was the first time an unmanned rocket returned to land vertically at Cape Canaveral, Florida, and represented a tremendous success for SpaceX. The company led by billionaire Elon Musk is striving for reusability to drive launch costs down and open up space to more people.

“It’s a revolutionary moment,” Musk later told reporters. “No one has ever brought a booster, an orbital-class booster, back intact.”

What’s significant is that this was a useful mission, Musk noted, not merely a practice flight. “We achieved recovery of the rocket in a mission that actually deployed 11 satellites,” he said.

SpaceX employees broke into cheers and chants, some of them jumping up and down, following the smooth touchdown nine minutes after liftoff. Previous landing attempts ended in fiery blasts, but those aimed for an ocean platform.

Musk said he ran outside and heard the sonic boom of the returning booster just as it landed; he assumed it had exploded. He learned the happy truth when he went back into Launch Control and saw video of the standing rocket.

Musk said the landing appeared close to perfect and the company “could not have asked for a better mission or a better day.”

“This was a first for us at Cape Canaveral Air Force Station, and I can’t even begin to describe the excitement the team feels right now having been a part of this historic first-stage rocket landing,” Monteith said in a statement.

Across the country, SpaceX employees jammed company headquarters in Hawthorne, California, anxiously awaiting success. They cheered at full throttle when the first stage separated cleanly two minutes into flight and reoriented itself for an unprecedented return to Cape Canaveral. Then the roar became deafening, as TV cameras showed the first-stage booster landing on extended legs at its new, dedicated landing zone. SpaceX commentators called it “incredibly exciting” and were visibly moved by the feat.

“This has been a wildly successful return to flight for SpaceX,” said one SpaceX launch commentator. “We made history today.”

Blue Origin, another billionaire’s rocket company, successfully landed a booster last month in West Texas. That rocket, though, had been used for a suborbital flight. The SpaceX booster was more powerful and flying faster in order to put satellites into orbit.

The touchdown was a secondary objective for SpaceX. The first was hoisting the satellites for OrbComm, a New Jersey-based communication company. All 11 were successfully deployed.

“Here she comes back,” Eisenberg said via Twitter, sharing a photo of the returning booster. Then: “Bullseye.”

The booster-landing zone, a former Atlas missile-launching site, is about six miles from the launch pad. SpaceX is leasing the touchdown area – marked by a giant X – from the Air Force. The reinforced concrete provides a stable surface, unlike the barges used for the initial attempts, primarily for increased safety.

On its previous flight back in June, SpaceX’s Falcon 9 rocket failed shortly after liftoff, destroying a supply ship intended for the International Space Station. A snapped strut in the upper stage was to blame. SpaceX spent months correcting the problem and improving the unmanned rocket. It hopes to resume supply runs for NASA in February.

Musk, who also runs the Tesla electric car company, said he can drastically reduce launch costs by reusing rocket parts. Three tries at vertical landings of the first-stage boosters earlier this year failed; in each case, the segment aimed for a modified barge off the coast of Jacksonville, Florida. This time, Musk opted for a true land landing.

Musk said it will take a few more years to iron everything out, for actual reusability of his rockets. In the meantime, he’s working to transform the SpaceX Dragon capsules from cargo ships into real spaceships for crews traveling to and from the orbiting station.

His ultimate goal, for human missions, is Mars.

“This was a critical step along the way to being able to establish a city on Mars,” he said. “That’s what all this is about.”