The next opportunity to blast off the $337 million satellite—which aims to advance the search for extraterrestrial life by scanning the skies for nearby, Earth-like planets—will be Wednesday.

The Transiting Exoplanet Survey Satellite, or TESS, is “in excellent health and remains ready for launch,” SpaceX said on Twitter.

The postponement was announced about two hours before the planned blast off from a NASA launchpad in Cape Canaveral, Florida.

The washing machine-sized spacecraft is built to search the nearest, brightest stars for signs of periodic dimming. These so-called “transits” may mean that planets are in orbit around them.

TESS is expected to reveal 20,000 planets beyond our solar system, known as exoplanets, NASA said.

Its discoveries will be studied further by ground- and space-based telescopes for signs of habitability, including rocky terrain, a size similar to Earth and a distance from their sun—neither too close nor too far—that allows the right temperature for liquid water.

NASA predicts that TESS could find more than 50 Earth-sized planets and up to 500 planets less than twice the size of the Earth.

TESS will survey far more cosmic terrain than its predecessor, NASA’s Kepler Space Telescope, which launched in 2009, taking in some 85 percent of the skies.

“TESS is equipped with four very sensitive cameras that will be able to monitor nearly the entire sky,” said George Ricker, TESS principal investigator at the Massachusetts Institute of Technology (MIT).

“That is about 20 times what the Kepler mission was able to detect.” 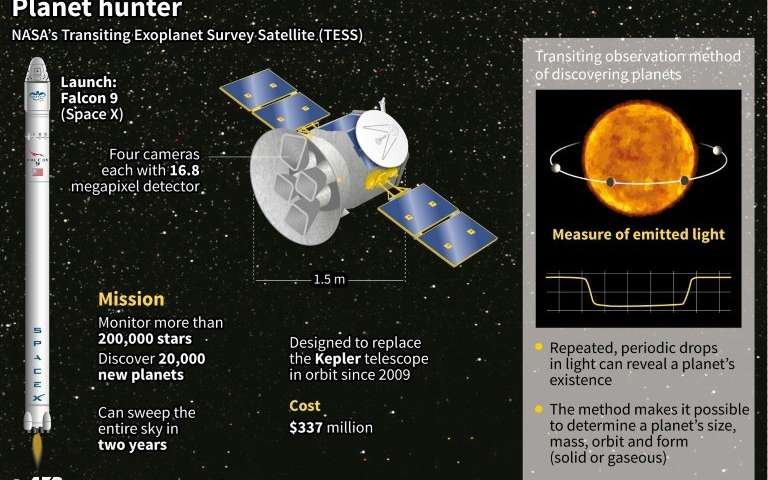 This graphic explains key facts about Nasa’s TESS telescope as it prepares for launch on a mission to find the nearest Earth-like planets (Image Credit: Phys.org)

Kepler, the first planet-hunting mission of its kind, “was launched to answer one single question: How common is a planet like Earth around a star like the Sun?” said Patricia “Padi” Boyd, director of the TESS guest investigator program at NASA’s Goddard Spaceflight Center.

“It was designed to look at 150,000 stars in a fairly wide field of view without blinking, for four years,” she told reporters on the eve of the launch.

“One of the many amazing things that Kepler told us is that planets are everywhere and there are all kinds of planets out there.

“So TESS takes the next step. If planets are everywhere, then it is time for us to find the planets that are closest to us orbiting bright nearby stars, because these will be the touchstone system.”

TESS and Kepler use the same system of detecting planetary transits, or shadows cast as they pass in front of their star.

While Kepler confirmed some 2,300 exoplanets and thousands more potential planet candidates, many were too distant and dim to be studied further.

With Kepler running low on fuel and nearing the end of its life, TESS aims to pick up the search while focusing closer, on planets dozens to hundreds of light years away.

“TESS is going to dramatically increase the number of planets that we have to study,” said Ricker.

The Hubble Space Telescope and the James Webb Space Telescope, scheduled to launch in 2020, should be able to reveal more about planets’ mass, density and the makeup of their atmosphere—all clues to habitability.

The first data from TESS is expected to be made public in July, and NASA says citizen astronomers are welcome to help study the planets.

It may be decades before astronomers know whether or not life exists elsewhere.