British aerospace start-up Faradair has recently revealed it has plans to build and sell an 18-seat, Bio Electric Hybrid Aircraft (BEHA) by 2025. The craft is designed to be both quiet and quick in its takeoff capabilities, and can be used for passengers or cargo air transport.

Dubbed the BEHA_M1H, the aircraft will use its Triple Box-Wing high-lift configuration that delivers Short Take-Off and Landing (STOL) capabilities, so essentially it will need less than 1,000 feet of runway. The plane will also consist of twin contra-rotating ‘propfans’ within a vectored thrust, and an acoustic reduction duct that reduces noise to a target of 60 dba at take-off.

Managing Director of Faradair Neil Cloughley says, “We have always believed in the opportunity of hybrid propulsion to help reduce noise and operating costs in a specifically designed airframe optimized for regional flight capability, based on our management team’s experience of the commercial aircraft market. The BEHA M1H variant, multi-role aircraft, will allow operators the ability to provide viable air transport services including; scheduled commuting flights, flight training and charter by day and the ability to use the quiet flight characteristics and payload capability for cargo operations at night. This opens market opportunities not served by existing aircraft, due to the lower noise signature and load capability. Our hybrid propulsion system mixes the proven capability of existing turboprop engines which could be run on biofuel if desired, with the fuel saving and increased safety opportunity of additional electric propulsion”

Additionally, the hybrid propulsion system will combine the electric motors with a Turboprop engine that will result in lower operating costs and lower emissions. The aircraft can also use the Turboprop engine for recharging the batteries that power the plane when landing and taking off.

As of now, the plane has gone through four years of development, and has evolved into a utilitarian configuration that can hold 18 passengers or hold three LD3 cargo containers. Ultimately, it has the capability to hold over 11,000 lb.

If the craft needs to change configuration from cargo to passenger, it only takes about 15 minutes. The company also says a flight from London to Manchester could be flown in about 42 minutes, where an HS2 would take about 1 hour and 8 minutes in comparison.

“The company vision for a British built aircraft that is able to deliver a range of roles both in civilian and non-civilian configuration is fascinating. The prospect of hybrid-electric flight and the ability for people throughout the UK and around the world to fly regionally as simply as taking a bus, is a future that opens up so much regional growth benefit opportunity,” says Grant Shapps, MP. “Most importantly, Faradair reminds us of our history in aerospace innovation and how we may rebuild aircraft manufacturing facilities from General Aviation airfields currently under threat of closure. I genuinely believe the Faradair BEHA is an exciting opportunity for the UK, both in civilian and non-civilian configuration, and I hope we will see the this new British Aerospace manufacturer grow, develop, and create jobs with the appropriate backing and funding to prove that the UK can continue to design and build world class, whole aircraft systems.” 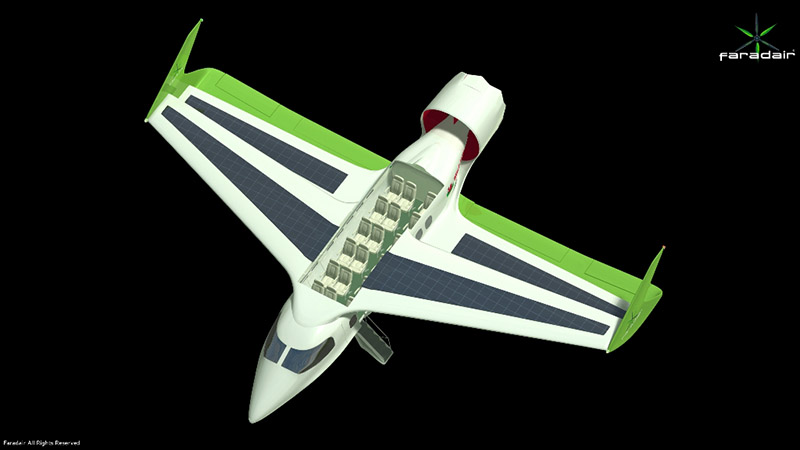