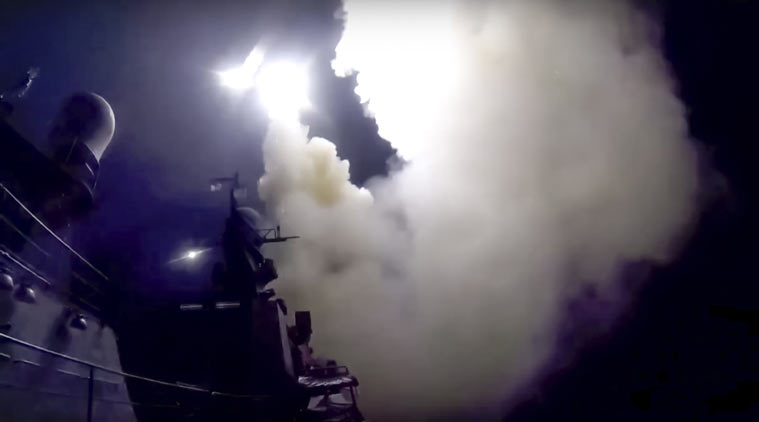 Russia’s recent cruise missile strike in Syria — despite reports that some wayward munitions landed in Iran — demonstrates the country’s advances in developing the technology, an expert said.

“It’s still good news for the Russians because they have actually used these new cruise missiles in combat for the first time and demonstrated their capability,” Paul Schwartz, a senior associate in the Russia and Eurasia program at the Center for Strategic and International Studies, said in an interview with Military​.com.

“The fact that four of them went off track … does not negate to a major extent the fact that most of these seem to have hit their target,” he added. “It shows that the underlying technology seems to be sound.”

Four Russian naval vessels in the Caspian Sea on Wednesday launched a total of 26 cruise missiles at 11 targets affiliated with the Islamic State in Iraq and Syria, or ISIS, according to an article from the Russian news organization RT.

The ships were identified in the report as the Gepard-class frigate Dagestan and the Buyan-M-class corvettes Grad Sviyazhsk, Uglich and Veliky Ustyug. They’re armed with Kalibr-NK launchers, which can launch missiles capable of hitting targets at distances of up to about 1,550 miles (2,500 kilometers).

Monitoring by U.S. military and intelligence assets concluded that at least four missiles crashed as they flew over Iran, according to a news report Thursday from CNN.

The Russian Defense Ministry, however, denied the report and said photographs and real-time video from drones show all the missiles — a long-range subsonic land-attack version of the Klub family — hit their intended targets, according to anther article on RT.

Even if some of the missiles missed their mark, the fact that many of them struck targets in Syria shows that Russia has closed the gap between the U.S. in conventional defense technology, Schwartz said.

“It’s important to remember that even the U.S. — with its very long history of using the Tomahawk dating to the Gulf War — it took us quite a while to become proficient with these missiles,” he said. “The Russians for some time have been wanting to upgrade to the precision-strike weapons that the U.S. has long enjoyed a monopoly on with the Tomahawk cruise missile.”

During the Cold War, the Soviet Union developed the RK-55 Granat land-based cruise missile, which carried a nuclear warhead, but the weapon was never fielded due to restrictions under the Intermediate-Range Nuclear Forces Treaty. It had also previously developed the anti-ship cruise missile P-700 Granit.

“The newer system is superior — better guidance system, lower flight profile, it’s more reliable,” Schwartz said. “It represents some of the many things the Russians have learned since the Cold War.”

Russia has also made significant technological gains in air defense systems, U.S. military officials say. The country in recent years has deployed an increasing number of higher quality surface-to-air missile systems and other defensive measures, particularly in and around Kaliningrad and Crimea — which it annexed from the Ukraine last year — to limit the ability of U.S. and NATO aircraft to enter its airspace.