An international group of astronomers led by the University of Sydney has discovered strong magnetic fields are common in stars, not rare as previously thought, which will dramatically impact our understanding of how stars evolve.

Using data from NASA’s Kepler mission, the team found that stars only slightly more massive than the Sun have internal magnetic fields up to 10 million times that of the Earth, with important implications for evolution and the ultimate fate of stars.

“This is tremendously exciting, and totally unexpected,” said lead researcher, astrophysicist Associate Professor Dennis Stello from the University of Sydney.

“Because only 5-0 percent of stars were previously thought to host strong magnetic fields, current models of how stars evolve lack magnetic fields as a fundamental ingredient,” Associate Professor Stello said. “Such fields have simply been regarded insignificant for our general understanding of stellar evolution.

“Our result clearly shows this assumption needs to be revisited.”

The findings are published today in the journal Nature. 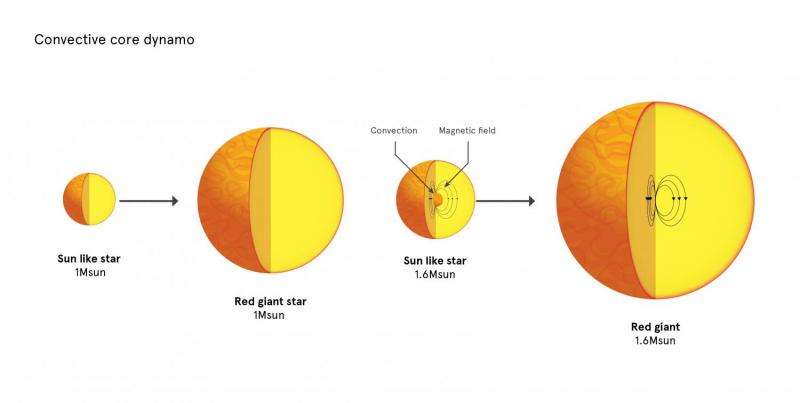 The magnetic fields seen in red giants are left over from an earlier phase when the stellar cores hosted turbulent convection, creating a ‘magnetic dynamo’. Magnetic fields are only present in stars more massive than the Sun because core convection only occurs in those stars. Credit: University of Sydney

The research is based on previous work led by the Californian Institute of Technology (Caltech) and including Associate Professor Stello, which found that measurements of stellar oscillations, or sound waves, inside stars could be used to infer the presence of strong magnetic fields.

This latest research used that result to look at a large number of evolved versions of our Sun observed by Kepler. More than 700 of these so-called red giants were found to show the signature of strong magnetic fields, with some of the oscillations suppressed by the force of the fields.

“Because our sample is so big we have been able to dig deeper into the analysis and can conclude that strong magnetic fields are very common among stars that have masses of about 1.5-2.0 times that of the Sun,” Associate Professor Stello explained.

“In the past we could only measure what happens on the surfaces of stars, with the results interpreted as showing magnetic fields were rare.”

Using a new technique called asteroseismology, which can ‘pierce through the surface’ of a star, astronomers can now see the presence of a very strong magnetic field near the stellar core, which hosts the central engine of the star’s nuclear burning. This is significant because magnetic fields can alter the physical processes that take place in the core, including internal rotation rates, which affects how stars grow old.

Most stars like the Sun oscillate continuously because of sound waves bouncing back-and-forth inside them. “Their interior is essentially ringing like a bell.” Associate Professor Stello said. “And like a bell, or a musical instrument, the sound they produce can reveal their physical properties.”

The team measured tiny brightness variations of stars caused by the ringing sound and found certain oscillation frequencies were missing in 60 percent of the stars because they were suppressed by strong magnetic fields in the stellar cores.

The results will enable scientists to test more directly theories of how magnetic fields form and evolve—a process known as magnetic dynamos—inside stars. This could potentially lead to a better general understanding of magnetic dynamos, including the dynamo controlling the Sun’s 22-year magnetic cycle, which is known to affect communication systems and cloud cover on Earth.

“Now it is time for the theoreticians to investigate why these magnetic fields are so common,” Associate Professor Stello concluded.