A team from Carnegie Mellon University will compete against nine other institutions June 5-7 at the NASA Langley Research Center in Hampton, Virginia, in an attempt to build and use robots to extract water from simulated Martian subsurface ice.

NASA’s Mars Ice Challenge is part of an effort by NASA to enable a sustained human presence on other worlds by taking advantage of the habitat’s resources. This will be a focus for NASA over the next few decades, and the challenge offers a unique way to engage students and faculty as partners in the efforts to send humans farther into space than ever before.

The Tartan Ice Drilling System team comprises 15 students from the College of Engineering. The team is advised by Mechanical Engineering Assistant Professor Aaron Johnson, who shares his expertise in robomechanics. Ph.D. candidate Catherine Pavlov also advises the team, drawing from her research experience at NASA.

Five of the students serve as project leads in four subgroups essential to the success of the ice drilling robot. The goal is to drill for ice mostly autonomously. Although the robot is competing on Earth, the team will need to know how to tweak it should it actually get sent to Mars.

Paula Zubiri, a junior in mechanical engineering, oversees the structure of the robot and the XYZ position system. She ensures the drilling mechanism does not overpower the body of the machine and cause it to unwind itself while drilling.

“A lot of my MechE background deals with analysis of, not just structures, but how different objects interact,” Zubiri said. “We’re going to be dealing with a drill rotating at really high velocity and really high torque in the middle of our system.”

Devin Gund and Christina Ou, a senior and junior in the Department of Electrical & Computing Engineering, respectively, lead the controls subgroup that handles the robot’s software. Because autonomy is an important project goal, the robot will need to sense where the drill should penetrate the ground, how deep and at what speed.

“We’re looking at all the environmental data from sensors and then controlling the rest of the machinery appropriately,” Gund said. “ECE is the perfect background for that because it’s just a mix of hardware and software.”

Tim Cote, a senior in the Materials Science & Engineering Department, is in charge of the drill subgroup and the selection of metals for its construction. The team walks a fine line of needing to make everything as light as possible for space travel but as strong as possible to withstand extreme speeds, forces and temperatures.

“In materials science, engineers need to maximize all the different properties that you want to get the best material for the job … I can’t just throw a huge steel bar up on Mars because it’s too heavy,” Cote said.

Caroline Morin, a senior studying chemical engineering and biomedical engineering, oversees the subgroup for water extraction and purification. They need to account for temperature and pressure to manipulate ice, water or vapor at certain points in their process. They want to thermally distill the ice without having it sublimate — rapidly change from solid to gas, since astronauts wouldn’t be available to replace parts that could wear out, such as membranes or filters.

“We will vaporize the water and then recondense it so that we are able to fully separate it from all minerals,” Morin said.

The team is bolstered by support from Carnegie Mellon faculty and staff in the form of mentorship, funding management and access to cutting-edge work spaces, such as The Tech Spark, the maker space on the C-level of Hamerschlag Hall, which has been the team’s headquarters.

“CMU has been really helpful with the whole process,” Morin said.

The team came together from separate programs and classes due to a common love for space technology.

“I think [working with engineers from various majors] is one of my favorite parts of this project,” Gund said. “It’s really just cool and impressive to be working with people outside of my field of study that know things that I don’t. I really enjoy that.” 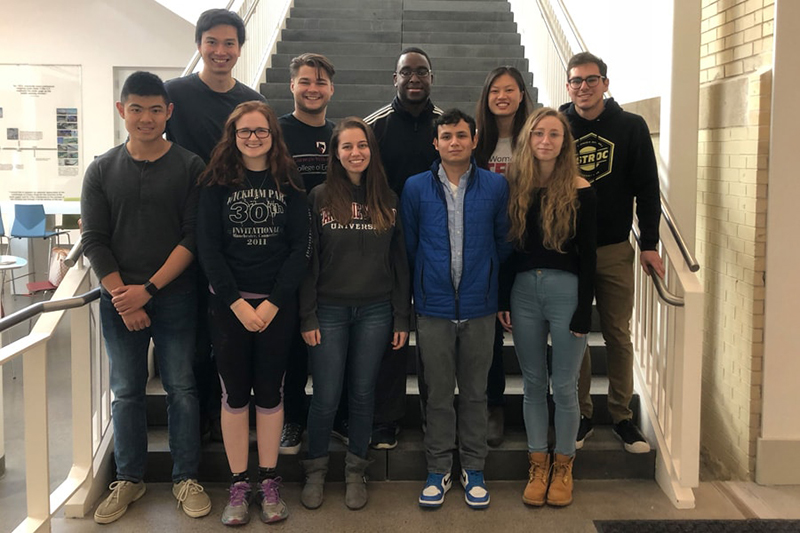