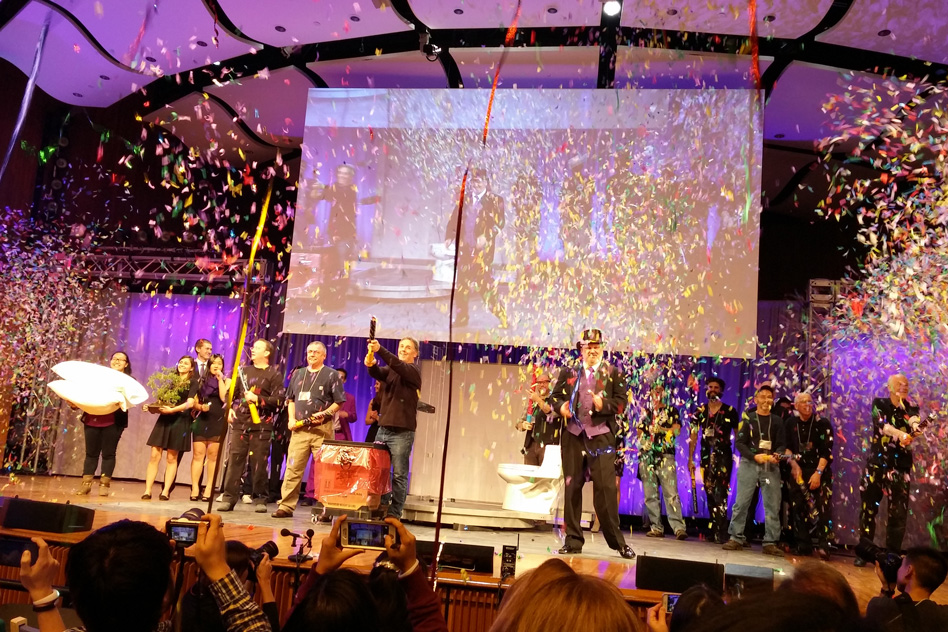 Mechanical engineering professor David Wallace (right of center in top hat) was surprised with a tribute video for his 20 years of teaching the “product engineering processes” class, before course instructors shot streams of confetti over the audience. (Photo: David L. Chandler)

In the 20 years that David Wallace has been teaching the mechanical engineering course “product engineering processes,” known by its course number 2.009, he has spiced up the class by donning costumes ranging from an explorer in a pith helmet, to a princess in a blonde wig, to a wizard in a cape.

The final course presentations by student teams have been no less dramatic, featuring a horse riding across the stage of Kresge auditorium, a bicyclist in a simulated rainstorm on stage, and a student immersed in a tank of water to demonstrate a rescue system. These presentations, delivered in a show with the flair of a Hollywood premiere and hosted by Wallace in a top hat and tails, have helped to make this class finale one of MIT’s most-anticipated annual events.

Arguably exceeding expectations, this year’s finale included the sight of a pair of climbers rappelling down from the ceiling of Kresge Auditorium to demonstrate a safety device for cavers and climbers, a complete toilet stall at center stage to demonstrate a hands-free door closer, and the usual burst of shiny confetti filling the air at the show’s conclusion.

The theme for this year’s product designs, executed by 150 students grouped into eight teams, was “magic,” and products developed by the teams spanned a broad gamut of possibilities. Examples included devices to help patients in hospitals or those needing back braces, a device to teach Braille to the visually impaired, a kite-shooting game, an automated theater spotlight, a camera boom for young explorers, and a way to stay germ-free in public restrooms.

Each team had about three months and a budget of $6,500 to come up with ideas, build a working prototype, and put together a polished presentation including detailed specifications, results of testing, a product demonstration, and a basic business plan. Everyone in the audience — selected partly by lottery, since the event is so popular — was invited to fill out score sheets for each presentation, rating them on a variety of criteria. (The results of those forms are just informational feedback for the students and don’t affect their grades.)

One team “flew” a kite onstage to demonstrate their new game product, a sort of hybrid of kite-flying and laser tag. Their kite (suspended by a wire for the demonstration) is equipped with sensors to detect the beams fired from a handheld “laser gun” that emits a beam of coded infrared light. While one person flies the kite, the other attempts to “shoot” it down with the laser gun; after the kite detects three direct hits, it releases a latch that makes it unstable and falls to the ground while remaining tethered by one corner for easy retrieval. After re-inserting a small plastic pin, the kite is ready to fly again for another round. The team field-tested the game with about 30 first-grade (and some older) kids, they said, and “everyone wanted one.” The team is looking into a licensing arrangement for their concept.

Paul Parravano, co-director of MIT’s Office of Government and Community Relations, who has been blind since age three, helped one team demonstrate a device they developed to help blind or visually impaired people to learn Braille. The small device features six bumps about the size of marbles that are raised or lowered to form the configurations that symbolize each letter, while the letter is spoken aloud. The device, modeled after one made of wood that Parravano’s father made for him long ago could help to alleviate the 95 percent Braille illiteracy rate and 60 percent unemployment rate among blind people in the United States, the team said.

The audience watched in amazement as one team demonstrated its safety device for climbers, cavers, and canyoners who like to rappel down ropes in their explorations. Typically, such climbers tie a knot at the end of the rope to block it from passing through the end of a rappelling device when they reach the rope’s end; if they forget the knot or it comes undone, they could fall — as one of the two students demonstrated, falling onto a three-foot-thick cushion. But the new device is foolproof, automatically engaging a brake to catch the rope as soon as the end is reached. The second student proved the point by reaching the end of his rope and automatically being stopped. He then had to climb back up to the ceiling, thus demonstrating the dual-use device’s second function as a rope ascender.

Another team graphically demonstrated the rationale for their self-closing and locking system for toilet-stall doors, showing microscope slides of some of the pathogens found in swabs from public restrooms — and eliciting loud groans from the audience. While hands-free sinks and hand dryers are now common in such facilities, the handles and locks of the stalls themselves have some of the worst concentrations of these microbes, they explained. The system uses three separate sensors to detect when someone enters the stall, then automatically closes and locks the door. The door can be reopened by waving a hand in front of the mechanism. Team members have discussed the system with local restaurant owners, who said they were enthusiastic and eager to try out the system.

At the end of the presentations, the students surprised Wallace, a professor of mechanical engineering and MacVicar Faculty Fellow, with a special tribute video in honor of his 20 years teaching this class — including images of a variety of the costumes he has worn over the years, demonstrating his perpetual willingness, as one of the class instructors said, “to continually humiliate himself” in the interests of providing an entertaining experience to his students. More seriously, as other co-instructors and past students commented in the video, Wallace sets an example with his “constantly striving for perfection” and “unrelenting drive” and “passion” — in sum, they said, setting an example of  “what great teaching looks like.”