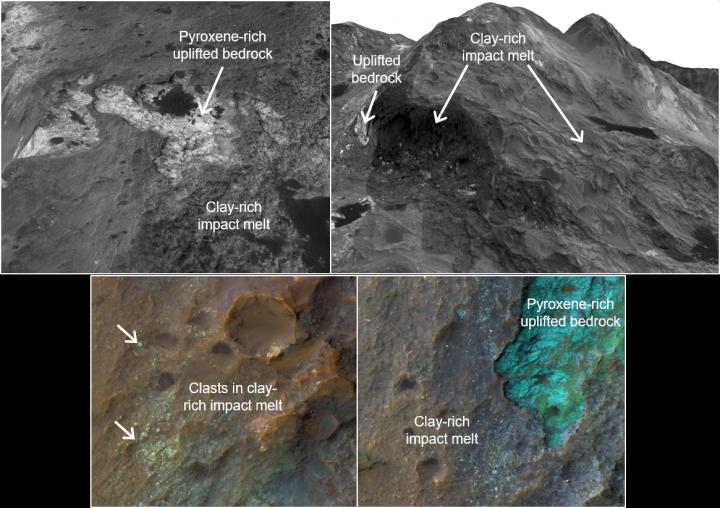 Ritchey Crater, located near the Martian equator, has impact melt deposits containing clay minerals. Impact melt forms when rock melted during an impact cools and hardens. The clay minerals found within these deposits are very likely to have formed after the impact event. Most clay minerals on Mars are thought to have formed during the earliest Martian epoch, known as the Noachian. However, evidence from Ritchey crater and other post-Noachian craters, suggests that clay formation after the Noachian was not uncommon.

Recent orbital and rover missions to Mars have turned up ample evidence of clays and other hydrated minerals formed when rocks are altered by the presence of water. Most of that alteration is thought to have happened during the earliest part of Martian history, more than 3.7 billion years ago. But a new study shows that later alteration — within the last 2 billion years or so — may be more common than many scientists had thought.

The research, by Brown University geologists Ralph Milliken and Vivian Sun, is in press in the Journal of Geophysical Research: Planets.

The lion’s share of the clay deposits found on Mars thus far have turned up in terrains that date back to the earliest Martian epoch, known as the Noachian period. Clays also tend to be found in and around large impact craters, where material from deep below the surface has been excavated. Scientists have generally assumed that the clays found at impact sites probably formed in the ancient Noachian, became buried over time, and then were brought back to the surface by the impact.

That assumption is particularly true of clay deposits found in crater central peaks. Central peaks are formed when, in the aftermath of an impact, rocks from within the crust rebound upward, bringing layers to the surface that had been buried many kilometers deep.

“Because central peaks contain rocks uplifted from depth, some previous studies have assumed the clays found within central peak regions are uplifted too,” said Milliken, assistant professor of Earth, environmental and planetary sciences. “What we wanted to do was look at lots of these craters in detail to see if that’s actually correct.”

Of those 633 peaks, Milliken and Sun found 265 that have evidence of hydrated minerals, the majority of which were consistent with clays. The researchers then used HiRISE images to establish a detailed geologic context for each of those craters to help determine if the clays were in rocks that had indeed been excavated from depth. They found that in about 65 percent of cases the clay minerals were indeed associated with uplifted bedrock.

“That’s a majority,” Milliken said, “but it still leaves a substantial number of craters — 35 percent — where these minerals are present and not clearly associated with uplift.”

Within those 35 percent, Milliken and Sun found examples where clays exist in dunes, unconsolidated soil, or other formations not associated with bedrock. In other cases, clays were found in impact melt — deposits of rock that had been melted by the heat of the impact and then re-solidified as it cooled. Both of these scenarios suggest that the clay minerals at these sites are likely “authigenic,” meaning they formed in place sometime after impact occurred, rather than being excavated from underground.

In a number of cases, these authigenic clays were found in fairly young craters, ones formed in the last 2 billion years or so.

“What this tells us is that the formation of clays isn’t restricted to the most ancient time period on Mars,” Milliken said. “You do apparently have a lot of local environments in these crater settings where you can still form clays, and it may have occurred more often than many people had thought.”

One mechanism for forming these clays could be related to the impact process itself, the researchers say. Impacts generate heat, which could melt any ice or pre-existing hydrated minerals that may have been present within the nearby crust. Any liberated water could then percolate through surrounding rock to form clays. Some impact simulations suggest that these hydrothermal conditions could persist for perhaps thousands of years, making for potentially habitable conditions.

And that could have implications for the search for evidence of past life on Mars.

“So far, much of our surface exploration by rovers has focused on ancient terrains and whether or not the environments they record were habitable,” said Sun, lead author on the study and a graduate student working with Milliken. “But if we wanted to look at an environment that was more recent, we’ve identified craters that might be possible candidates.”