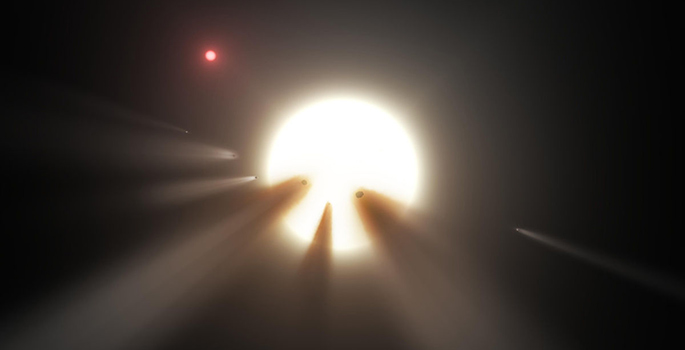 Sorry, E.T. lovers, but the results of a new study make it far less likely that KIC 8462852, popularly known as Tabby’s star, is the home of industrious aliens who are gradually enclosing it in a vast shell called a Dyson sphere.

Public interest in the star, which sits about 1,480 light-years away in the constellation Cygnus, began last fall when Yale astronomer Tabetha (Tabby) Boyajian and colleagues posted a paper on an astronomy preprint server reporting that “planet hunters” – a citizen science group formed to search data from the Kepler space telescope for evidence of exoplanets – had found unusual fluctuations in the light coming from the otherwise ordinary F-type star (slightly larger and hotter than the sun).

The most remarkable of these fluctuations consisted of dozens of uneven, unnatural-looking dips that appeared over a 100-day period indicating that a large number of irregularly shaped objects had passed across the face of the star and temporarily blocked some of the light coming from it.

Media interest went viral last October when a group of astronomers from Pennsylvania State University released a preprint that cited KIC 8462852’s “bizarre light curve” as “consistent with” a swarm of alien-constructed megastructures.

The attention caused scientists at the SETI Institute to train its Alien Telescope Array on the star to see if they could detect any radio signals indicating the presence of an alien civilization. In November it reported finding “no such evidence” of signals with an artificial origin.

Then a study released in January by a Louisiana State University astronomer threw even more fuel on the fire of alien speculation by announcing that the brightness of Tabby’s star had dimmed by 20 percent over the last century: a finding particularly difficult to explain by natural means but consistent with the idea that aliens were gradually converting the material in the star’s planetary system into giant megastructures that have been absorbing increasing amounts of energy from the star for more than a century. That study has been accepted for publication in the peer reviewed Astrophysical Journal.

However, a new study – also peer reviewed and accepted for publication in the Astrophysical Journal – has taken a detailed look at the observations on which the LSU study was based and concluded there is no credible evidence that the brightness of the star been steadily changing over this period.

When the LSU study was posted on the physics preprint server ArXiv, it caught the attention of Vanderbilt doctoral student Michael Lund because it was based on data from a unique resource: Digital Access to a Sky Century @ Harvard. DASCH consists of more than 500,000 photographic glass plates taken by Harvard astronomers between 1885 and 1993, which the university is digitizing. Lund was concerned that the apparent 100-year dimming of Tabby’s star might just be the result of observations having been made by a number of different telescopes and cameras that were used during the past century.

Lund convinced his advisor, Professor of Physics and Astronomy Keivan Stassun, and a frequent collaborator, Lehigh University astronomer Joshua Pepper, that the question was worth pursuing. After they began the study, the Vanderbilt/Lehigh group discovered that another team – German amateur astronomer Michael Hippke and NASA Postdoctoral Fellow Daniel Angerhausen – were conducting research along similar lines. So the two teams decided to collaborate on the analysis, which they wrote up and submitted to the Astrophysical Journal.

“Whenever you are doing archival research that combines information from a number of different sources, there are bound to be data precision limits that you must take into account,” said Stassun. “In this case, we looked at variations in the brightness of a number of comparable stars in the DASCH database and found that many of them experienced a similar drop in intensity in the 1960’s. That indicates the drops were caused by changes in the instrumentation not by changes in the stars’ brightness.”

Even if aliens are not involved, Tabby’s star remains “the most mysterious star in the universe” as Boyajian described it in a TED talk she gave last February.

The planet hunters first detected something unusual in the star’s light curve in 2009. They found a 1 percent dip that lasted a week. This is comparable to the signal that would be produced by a Jupiter-sized planet passing in front of the star. But planets produce symmetric dips and the one they found was decidedly asymmetric, like something that would be produced by an irregular-shaped object like a comet.

The light from the star remained steady for two years, then it suddenly took a 15 percent plunge that lasted for a week.

Another two years passed without incident but in 2013 the star began flickering with a complex series of uneven, unnatural looking dips that lasted 100 days. During the deepest of these dips, the intensity of the light coming from the star dropped 20 percent. According to Boyajian it would take an object 1,000 times the area of the Earth transiting the distant star to produce such a dramatic effect.

“The Kepler data contains other cases of irregular dips like these, but never in a swarm like this,” said Stassun.

Boyajian and her colleagues considered a number of possible explanations, including variations in the star’s output, the aftermath of an Earth/Moon type planetary collision, interstellar clumps of dust passing between the star and earth, and some kind of disruption by the star’s apparent dwarf companion. However, none of their scenarios could explain all of the observations. Their best explanation was a giant comet that fragmented into a cascade of thousands of smaller comets. (This hypothesis took a hit when the LSU study was announced because it could not explain a century-long dimming.)

“What does this mean for the mystery? Are there no aliens after all? Probably not! Still, the dips found by Kepler are real. Something seems to be transiting in front of this star and we still have no idea what it is!” Hippke summarized.

The Kepler telescope is no longer collecting data in the Cygnus region, but Hippke reports that the mystery has captured the imagination of amateur astronomers around the world so thousands of them are pointing their telescopes at Tabby’s star, snapping images and sending them to the American Association of Variable Star Observers in hopes of detecting further dips that will shed new light on this celestial mystery.