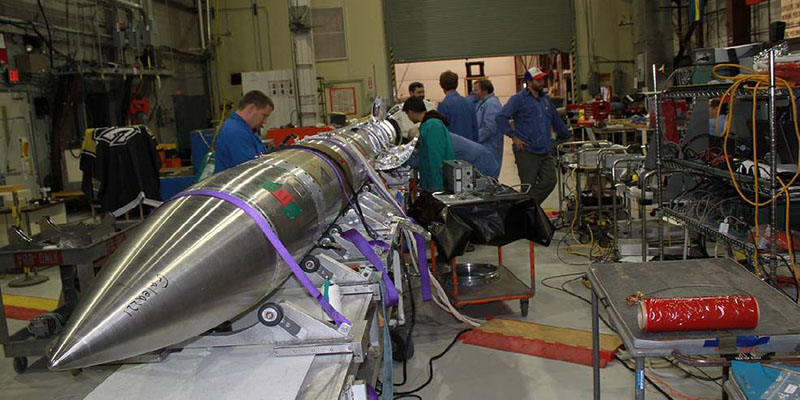 The DXL-2 payload is prepared for launch in the NASA payload assembly building at the White Sand Missile Range in New Mexico. Credits: NASA/Ted Gacek

The blackness of space. There isn’t much visible light in space – but there are numerous other wavelengths of light and scientists want to know what’s out there and where it comes from.

Diffuse x-ray emissions have long been believed to be from remnants of a supernovae which formed the local hot bubble.

However, the Diffuse X-rays from the Local Galaxy, or DXL, experiment in 2012 found that around 40 percent of this radiation is a result of the solar wind charge exchange, solar wind taking away electrons from neutral gas in space emitting x-rays.

The principal investigator reports that good data was obtained. The 1,467 pound DXL-2 payload flew to an altitude of 148 miles before descending by parachute. Payload recovery is in progress at White Sands.

“The purpose of the flight is to better understand the nature and characteristics of the local hot bubble and solar wind charge exchange, with the double goal of understanding their fundamental physics and improving our modeling capability to use in the interpretation of past, present and future X-ray missions,” said Massimiliano Galeazzi, the DXL-2 principal investigator from the University of Miami.

The payload incorporates an upgraded University of Wisconsin Aerobee IV instrument flown on several rockets from 1973 through 1980.

The 1,497 pound DXL-2 payload will fly on a NASA Black Brant IX suborbital sounding rocket to an altitude 139 miles. The payload will be recovered and would be available for future flights.