NASA’s Cyclone Global Navigation Satellite System (CYGNSS) is peering down through clouds to get an unprecedented view of this year’s hurricane activity. Already this season, five tropical storms have formed over the Atlantic Ocean, and the Pacific Ocean has had 20 tropical storms, five hurricanes, and two typhoons.

The constellation of eight microsatellite spacecraft, built and operated by Southwest Research Institute (SwRI), was launched into low-inclination, low-Earth orbit over the tropics on December 2016. CYGNSS is spending this hurricane season gathering data to help the weather forecasting community improve existing storm prediction models, said John Scherrer, a program director in SwRI’s Space Science and Engineering Division. In recent decades, forecasters have greatly improved models that predict the path of hurricanes, but the ability to predict a storm’s rapidly changing intensity has lagged.

CYGNSS remains a research project for now as NASA evaluates the amount and accuracy of wind data it returns to Earth. It could become operational as a near-real-time forecasting tool next season if this year’s storm data shows the expected improvement.

“We are measuring wind speed at every spot in the tropics right now for four hours, twice a day,” Scherrer said. “That’s equivalent to a fleet of 32 hurricane hunter airplanes flying 24-7 throughout the tropics”

Hurricane-penetrating aircraft have limited range and can spend only a short time inside a storm. Also, radar from weather satellites can’t penetrate the heavy clouds near a hurricane’s center to measure wind speeds and intensity.

CYGNSS, however, works by receiving GPS satellite signals, which can penetrate even the heaviest cloud cover. The miniature satellites, each of which would fit atop a desk, measure how much GPS satellite signals are scattered as they reflect off the ocean surface. Greater scattering indicates a choppier surface due to higher wind speeds, which are a key component of storm intensity.

“During this hurricane season, our team will stress-test our ground operations systems for near-real-time forecasting,” said SwRI’s Jillian Redfern, the CYGNSS project and mission operations manager. “We will downlink data from each of the eight ‘microsats’ at every ground station and then flow the data through the operations systems to the science community to minimize the time between ‘acquiring’ data to ‘using’ data. We anticipate increasing our ground contacts from the current level of four per day to 35 per day during testing. Fortunately, most of this will be automated.”

CYGNSS makes frequent measurements of ocean surface winds to monitor the location, intensity, size, and development of tropical cyclones. Flying in formation, the spacecraft cover an orbital swath that passes over most of the Earth’s hurricane-producing zone, up to 35 degrees north and south of the Equator. 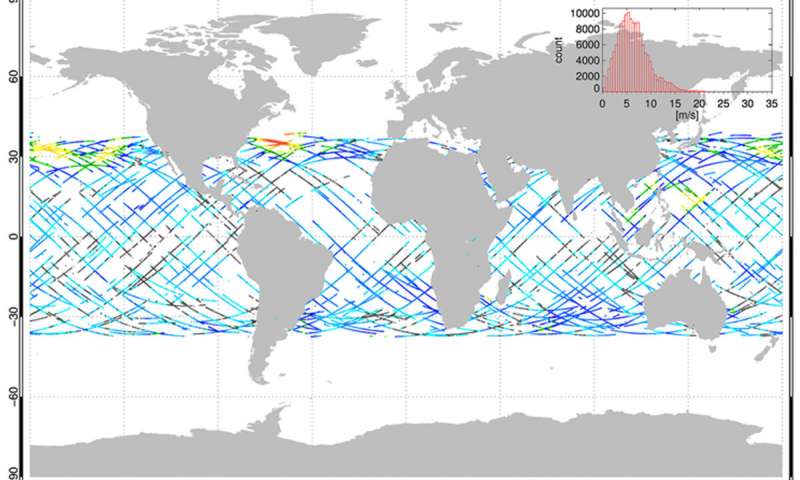 This map shows the ocean surface wind measurements made by one of the eight SwRI-built spacecraft in the CYGNSS constellation over approximately 6 hours on February 14, 2017. The blue values indicate relatively low wind speeds, while the yellow, orange, and red values indicate increasingly higher wind speeds. The highest wind speeds in this image (orange and red) are associated with a powerful extratropical cyclone along the East Coast of North America. (Image Credit: Southwest Research Institute)