Unless you’ve been living under a rock, you’ve already heard about the Juno spacecraft’s approach of our Solar System’s largest, fifth rock from the sun, Jupiter. After nearly five years, Juno entered the planet’s orbit during a 35-minute engine burn on Monday, July 4th—a significant day for the Red, White, and Blue. 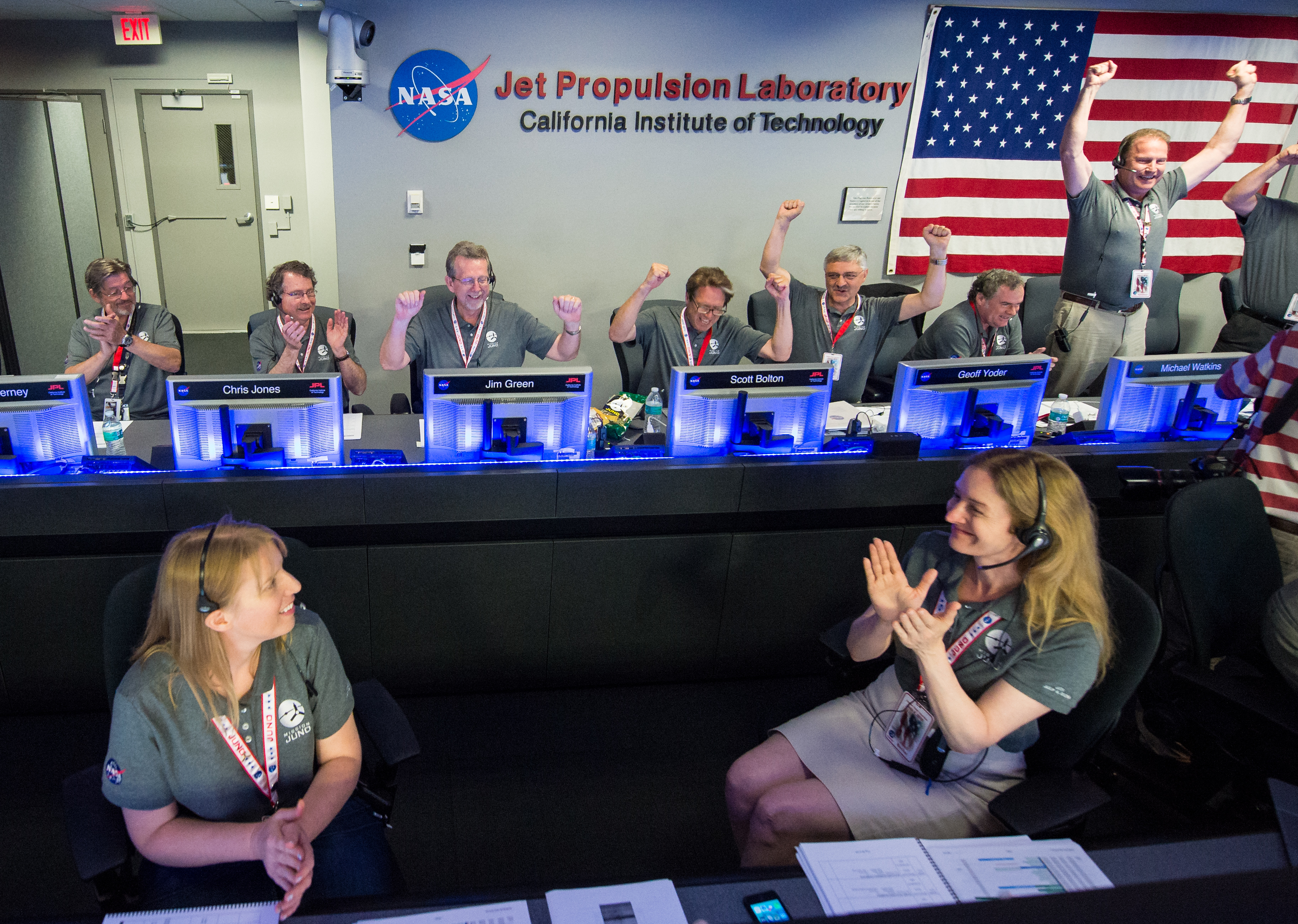 The Juno team celebrates after receiving confirmation from the spacecraft that it had successfully completed the engine burn and entered orbit of Jupiter, Monday, July 4, 2016. (Image credit: NASA)

As NASA administrator Charlie Bolden put it: “Independence Day always is something to celebrate, but today we can add to America’s birthday another reason to cheer—Juno is at Jupiter. And what is more American than a NASA mission going boldly where no spacecraft has gone before?”

Editorial jingoism aside, Juno’s goal is to understand the planet’s origin and evolution—in particular, to investigate its solid planetary core, map its magnetic field, measure the amounts of water and ammonia in the deep atmosphere, and observe its auroras.Despite NASA’s recent milestone (Juno is the second craft to ever enter Jupiter’s orbit), this isn’t humanity’s first attempt to explore mighty Jupiter. What follows is a brief history of the nearly forty years of probe flybys and orbiter missions, all of which make Jupiter the most visited of the Solar System’s outer planets.

In 1973, NASA’s Pioneer 10 completed the first mission to Jupiter, thereafter becoming the first spacecraft ever to achieve escape velocity from the Solar System.

One year later, the Pioneer 11 conducted a flyby. Both probes took the first-ever close-up pictures of Jupiter and discovered the planet’s magnetosphere and largely fluid interior.

In 1992 (and again eight years later), Ulysses, a spacecraft whose primary mission was to orbit the sun, swung by Jupiter to further study its magnetosphere.

In 1995, Galileo was the first spacecraft to enter Jupiter’s orbit. It remained there until 2003, during which time it gathered large amounts of data on the planet and its moons. To this day, it remains the only probe to have sent an atmospheric probe into the Jovian atmosphere.

In 2000, Cassini took detailed images of Jupiter’s atmosphere, while in 2007, New Horizons swung by to observe the planet’s atmospheric conditions and analyze its cloud composition. This was the first time Jupiter’s Little Red Spot (and by “Little,” its diameter spans 70 percent of Earth’s) was imaged up close.

Next up: European Space Agency (ESA)’s Jupiter Icy Moon Explorer (JUICE) is slated to launch in 2022, arriving at Jupiter in 2030 to study its three moons Ganymede, Calliso, and Europa.