In a surprise but smart move, Teradyne (NYSE:TER), the American test solutions provider that acquired Universal Robots in 2015 and Energid Technologies earlier in 2018, acquired Danish MiR (Mobile Industrial Robots) for $148 million with an additional $124 million predicated on very achievable milestones between now and 2020.

MiR was just returning from celebrating its 300% growth in 2017 at a company get-together in Barcelona with 70 MiR employees from all over the world when the announcement was made. It tripled its revenue from autonomous mobile robots (AMRs) in 2017. MiR co-founder and CEO Thomas Visti said that growth in 2017 was primarily due to multinational companies that returned with orders for larger fleets of mobile robots after they tested and analyzed the results of their initial MiR robot orders. 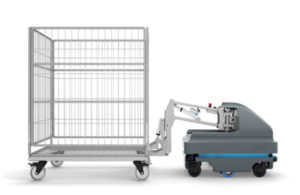 Another factor in MiR’s 2017 growth was the launch of the MiR200 which can lift 440 pounds, pull 1,100 pounds, is ESD approved and cleanroom certified. “The MiR200 has been very well received and represents a large part of our sales. The product meets clear needs in the market and increases potential applications for autonomous mobile robots. Combined with our new and extremely user-friendly interface – which even employees without programming experience can use – it makes it even simpler for our customers to implement and use our robots,” Visti said.

Another reason for MiRs rapid growth has been their initial strategic decision to develop and market solely to a growing network of integrator/distributors originally developed by Visti when he was VP of Sales at Universal Robots. MiR presently has 132 distributors in 40 countries with regional offices in New York, San Diego, Singapore, Dortmund, Barcelona and Shanghai – and the lists are growing. Teradyne, by this acquisition, is hoping to capitalize on the synergies between MiR and UR as shown in the chart above. Both offer end users fast ROI and low cost of entry and provide Teradyne with attractive gross margins and rapid growth.

“We are excited to have MiR join Teradyne’s widening portfolio of advanced, intelligent, automation products,” said Mark Jagiela, President and CEO of Teradyne. “MiR is the market leader in the nascent, but fast growing market for collaborative autonomous mobile robots (AMRs). Like Universal Robots’ collaborative robots, MiR collaborative AMRs lower the barrier for both large and small enterprises to incrementally automate their operations without the need for specialty staff or a re-layout of their existing workflow. This, combined with a fast return on investment, opens a vast new automation market. Following the path proven with Universal Robots, we expect to leverage Teradyne’s global capabilities to expand MiR’s reach.”

Earlier this year, Teradyne acquired Energid for $25 million in a talent and intellectual property acquisition. Energid, which is exhibiting and speaking at the Robotics Summit & Showcase, developed the robot control and tasking framework Actin which is used in industrial, commercial, collaborative, medical and space-based robotic systems and is a UR partner. Teradyne sees Actin as an enabling technology for advanced motion control and collision avoidance.

MiR founder and CSO Niels Jul Jacobsen, Visti, and investors Esben Østergaard, Torben Frigaard Rasmussen, and Søren Michael Juul Jørgensen should all be proud of their achievement thus far. Congratulations to all!