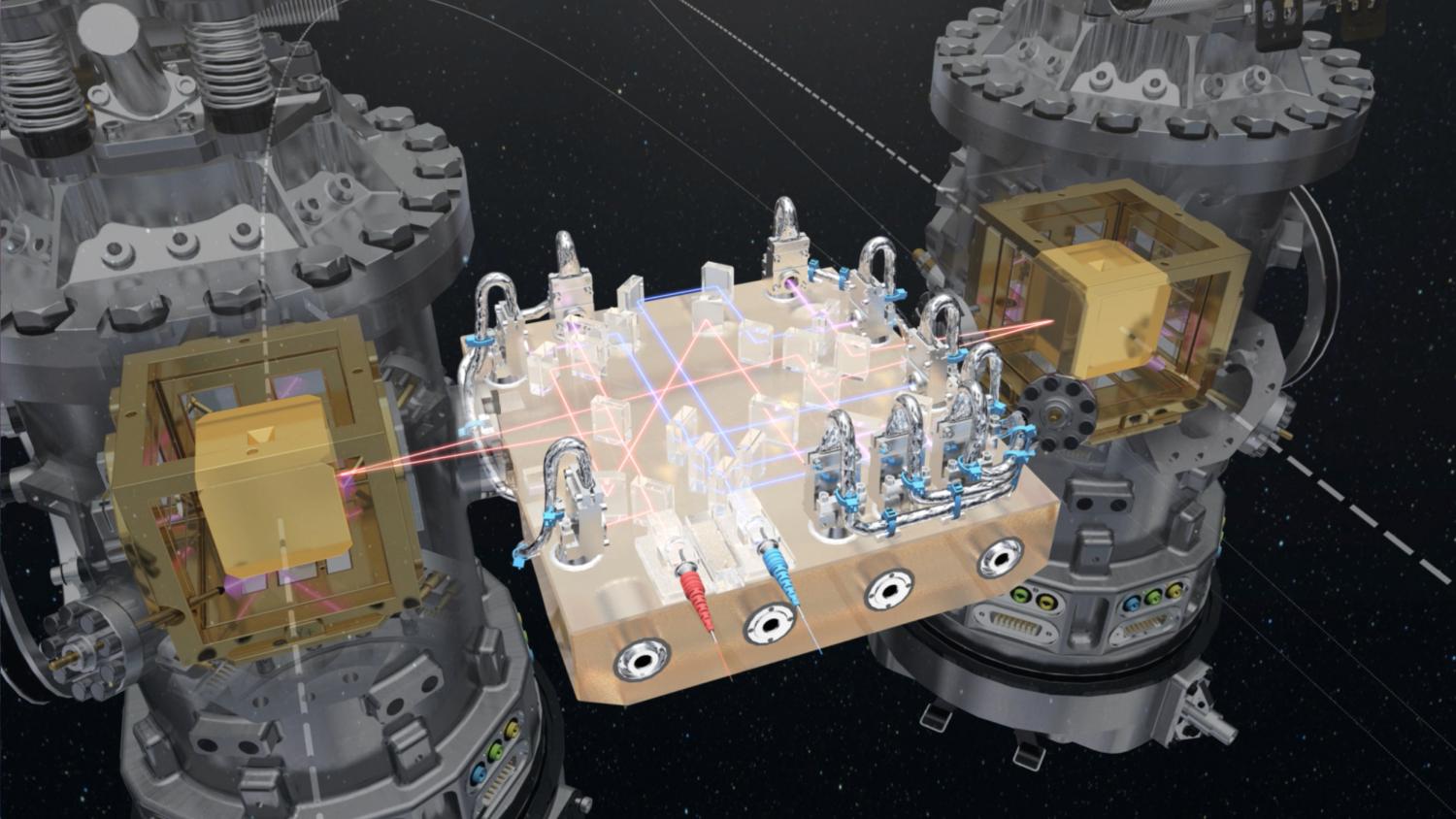 At the core of LISA Pathfinder are the two test masses: a pair of identical 46 mm gold–platinum cubes, floating freely, several millimetres from the walls of their housings. The cubes are separated by 38 cm and linked only by laser beams to measure their position continuously. During the science operations phase, microthrusters will make minuscule shifts in order to keep the spacecraft centred on one of the masses. This will isolate the two cubes from all external and internal forces except gravity, placing them in the most precise freefall ever obtained. (Credit: ESA/ATG medialab)

ESA’s LISA Pathfinder has released both of its gold–platinum cubes, and will shortly begin its demanding science mission, placing these test masses in the most precise freefall ever obtained to demonstrate technologies for observing gravitational waves from space.

Launched on 3 December, LISA Pathfinder reached its operational location on 22 January, some 1.5 million km from Earth in the direction of the Sun.

As tests on the spacecraft and its precious payload continue, a major milestone was reached today. For the first time, the two masses – a pair of identical 46 mm gold–platinum cubes – in the heart of the spacecraft are floating freely, several millimetres from the walls of their housings. The cubes sit 38 cm apart linked only by laser beams.

Throughout LISA Pathfinder’s ground handling, launch, the burns that raised its orbit, and the six-week cruise to its work site, each cube was held firmly in place by eight ‘fingers’ pressing on its corners.

On 3 February, the locking fingers were retracted and a valve was opened to allow any residual gas molecules around the cubes to vent to space.

Each cube remained in the centre of its housing held by a pair of rods softly pushing on two opposite sides.

The rods were finally released from one test mass yesterday and from the other today, leaving the cubes floating freely, with no mechanical contact with the spacecraft.

“This is why we sent the test cubes into space: to recreate conditions that are impossible to achieve in the gravitational field of our planet,” says Paul McNamara, ESA’s project scientist.

“Only under these conditions is it possible to test freefall in the purest achievable form. We can’t wait to start running experiments with this amazing gravity laboratory.”

It will be another week before the cubes are left completely at the mercy of gravity, with no other forces acting on them. Before then, minute electrostatic forces are being applied to move them around and make them follow the spacecraft as its flight through space is slightly perturbed by outside forces such as pressure from sunlight.

On 23 February, the team will switch LISA Pathfinder to science mode for the first time, and the opposite will become true: the cubes will be in freefall and the spacecraft will start sensing any motions towards them owing to external forces. Microthrusters will make minuscule shifts in order to keep the craft centred on one mass.

Then the scientists will be in a position to run several months of experiments to determine how accurately the two freely-flying test masses can be kept positioned relative to each other, making measurements with the laser that links them.

“The release of the test masses was clearly the most critical operation throughout the mission, as it was not possible to test it fully on the ground due to the small forces and movements involved. We are ecstatic with this world-class achievement,” says César García Marirrodriga, ESA’s project manager.

“This is a testament to the innovation and dedication of the large team of people that put together this outstanding space laboratory.”

After final checks, LISA Pathfinder will begin its science mission on 1 March, validating a key technology for observing gravitational waves from space.

Gravitational waves are minute fluctuations in the fabric of spacetime, predicted by Albert Einstein’s general theory of relativity and directly observed for the first time recently by the Laser Interferometer Gravitational-Wave Observatory – an announcement that created a worldwide sensation last week.

As this discovery confirmed, ground-based experiments can detect high-frequency gravitational waves from cosmic events such as the coalescence of a pair of stellar remnants, like neutron stars or black holes. However, to observe lower-frequency gravitational waves emitted by different astronomical sources, such as the merging of supermassive black holes at the centre of large galaxies, it is necessary to move the search into space.

There, a future gravitational wave observatory, already identified as the goal for the L3 mission in ESA’s Cosmic Vision programme, will measure distortions in the fabric of spacetime on the inconceivably tiny scale of a few millionths of a millionth of a metre over a distance of a million kilometres.

“Releasing LISA Pathfinder’s test masses is another step forward in gravitational wave astronomy within this memorable month: the test masses are, for the first time, suspended in orbit and subject to measurements,” says Stefano Vitale of University of Trento, Italy, Principal Investigator of the LISA Technology Package.

In the coming months, LISA Pathfinder will verify the fundamental condition needed for a future gravitational wave observatory in space: putting test masses into freefall at unprecedented levels of accuracy, by isolating the two cubes from all external and internal forces except one: gravity. Stay tuned!