No nostalgia for old test instruments 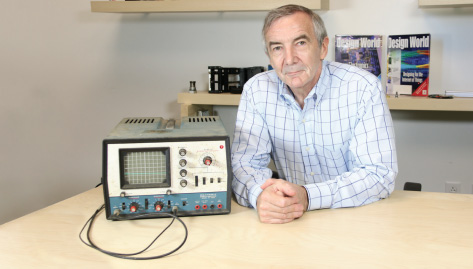 The media constantly reminds us that the capabilities we can get in our laptop computers and PCs have grown exponentially over the past few decades. Though it has gotten much less press, the same phenomenon applies to electronic test instruments.

For evidence, consider the Heathkit Model 10-4205 oscilloscope I assembled in my basement back around 1980. The kit was impressive in its heyday; it has a 5-MHz bandwidth, pretty much a requirement if you were troubleshooting TV sets of the time. In contrast, other hobby scopes back then mainly were good only for audio frequencies.

The 4205 has two independent channels that share the same time base. Its vertical sensitivity is 10 mV/ cm with a horizontal sweep ranging from 200 msec to 0.2 µsec/division. It can trigger on ac or dc levels, a TV signal, or plus/minus signal slope. And, of course, the 4205 is an analog scope.

Today, you can still find scopes in the 4205’s original price range. But their performance specifications are quite different. Just to pick one example, consider a DS1102E made by Rigol. It is a dual-channel digital scope with a bandwidth 20 times (100 MHz) that of my old Heathkit. It can record waveforms in a one-million-point memory, whereas the only way to record a waveform traced out on the 4205 was with a film camera. It triggers on waveforms that were unheard of in 1980 and displays them on a color screen. And it automatically measures waveform parameters that scope users in 1980 had to figure out using pocket calculators and grease pencils for marking pertinent measurement points on the scope screen.

Comparisons get even more interesting when you allow for inflation. The 4205’s equivalent 2015 price would be between $1,000 and $1,600. Modern scopes in that price range look like they come from another planet when put next to the 1980s-vintage predecessor.

To pick another example from numerous candidates, consider the 2000-X series scopes from Keysight Technologies. These are portable units with a bandwidth 40 times (up to 200 MHz) that of the Heathkit. Their vertical sensitivity is 1 mV/division and their time base goes down to 2 nsec/division. The trend in scopes is to combine several instrument functions into one chassis and this model is no exception. It incorporates a function generator, DVM, protocol analyzer and counter.

All in all, it’s a truism that modern instrumentation has made life a lot easier for engineers running tests. You can get a bird’s eye view of how far instrument technology has come from the oscilloscope buyer’s guide you’ll find tucked into our Test & Measurement Handbook. But one thing you won’t find in it is a 5-MHz oscilloscope.