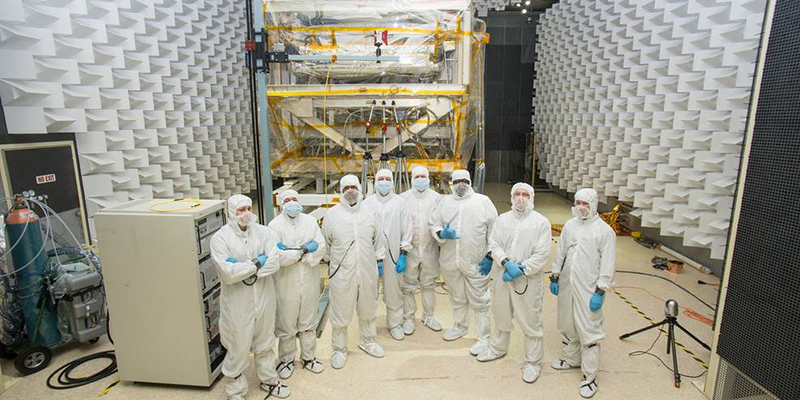 The instruments that will fly aboard NASA’s James Webb Space Telescope not only have to be tough enough to survive in the cold of space, but they also have to work properly in the electromagnetic environment on the spacecraft, so they’re tested for both. Recently, they passed a test for the latter in a very unique room.

Stepping inside NASA’s Electromagnetic Interference or EMI laboratory at NASA’s Goddard Space Flight Center in Greenbelt, Maryland feels like stepping inside a Lady Gaga music video. Inside this white room where conical structures jut out from the walls, a team of engineers clad in “bunny suits” or white suits recently and successfully completed one of the key environmental tests for the Integrated Science Instrument Module (ISIM), the science payload of the James Webb Space Telescope.

The ISIM can be considered the eyes and ears of Webb telescope and the purpose of the test was to verify that these eyes and ears will be compatible with the electromagnetic environment on the spacecraft.

These tests must be performed in an anechoic (Latin for “no echo”) chamber. The conical structures jutting out from the walls absorb the electromagnetic energy in order to minimize reflections. As much as a sound booth works to minimize the reflection of sound waves, the anechoic material minimizes reflections of electromagnetic waves so that they don’t bounce back and combine with the original waves, which would disturb the integrity of the test.

“The anechoic material minimizes reflections in order to give maximum control of the test,” said Goddard Chief EMC Engineer John McCloskey. “A metal wall is like a mirror for electromagnetic waves. These walls are designed to absorb the radiated energy and minimize reflections so that we know what we are actually measuring.  We need to know that what we are measuring is actually coming directly from ISIM and not from multiple reflected paths in the room.”

The project schedule allotted 10 days for the test. The team met all the test objectives in 8.5 days. ISIM passed with flying colors.

“Despite a few setbacks, our team finished the test ahead of schedule and beat the deadline,” said John McCloskey. “This test is important because when the James Webb Space Telescope is operating in space and identifying distant galaxies and other astronomical objects, we will have confidence that these are indeed real objects and not blips caused by electromagnetic interference.”

Now, the ISIM is inside the thermal vacuum chamber at NASA Goddard, undergoing its third and final cryogenic test. This test will ensure that Webb telescope’s eyes and ears will work properly in the frigid temperatures of space.

The images from the Webb telescope will reveal the first galaxies forming approximately 13.5 billion years ago. The telescope will also see through interstellar dust clouds to capture stars and planets forming in our own galaxy. At the telescope’s final destination in space, one million miles away from Earth, it will operate at incredibly cold temperatures of minus 387 degrees Fahrenheit, or 40 degrees Kelvin. This is 260 degrees Fahrenheit colder than any place on the Earth’s surface has ever been.

For more information about the Webb telescope visit www.nasa.gov/webb or jwst.nasa.gov.