There’s a great line in the beginning of Ted, the 2012 comedy in which a child’s wish on a shooting star brings his beloved teddy bear to life: “Nothing is more powerful than a young boy’s wish. Except an Apache helicopter. An Apache helicopter has machine guns and missiles. It is an unbelievably impressive complement of weaponry, an absolute death machine.”

Perhaps this was a roundabout way to open up a very topical article about recent developments in military technology. Bear with me, reader.

On March 17, at the Association of the U.S. Army’s Institute of Land Warfare Global Force Symposium and Exposition in Huntsville, Alabama, Col. Jeff Hager announced that the Army plans to modernize the sensor and turret technology on the Army’s AH-64 Apache helicopter—replacing the aircraft’s 1984 legacy components.

“They have not been upgraded since the Alpha models of Apache,” said Hager, who is Apache project manager of the Program Executive Office for Aviation. “We will see the new components on all Echo models. They are real important for reliability and maintainability.”

The Modernized Day Sensor Assembly (M-DSA) and the High Reliability Turret will be integrated into the aircraft’s E-model, set to be manufactured in 2019, and then installed in earlier models. The turret, which Lockheed Martin was awarded a contract for in 2014, is expected to save the Army $500 million in operation and support costs. It integrates smaller, more cost-effective modules that can be replaced without having to replace the turret’s entire line replacement unit (LRU).“The whole objective of the team—industry and government—is to keep parts on the aircraft,” said David Belvin, Apache Programs Director, Lockheed Martin Missiles and Fire Control. “We are designing to make the aircraft as reliable as possible and to keep the burden off the maintainer in the field.” 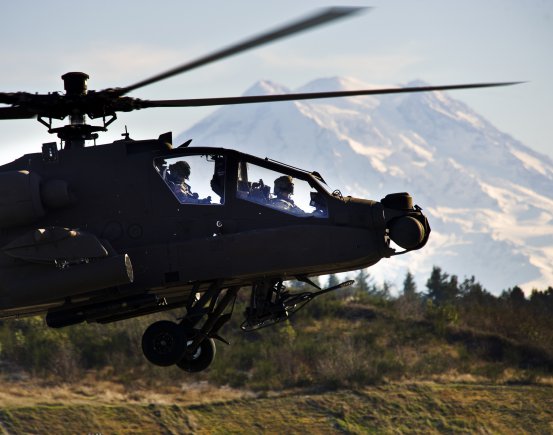 (Photo courtesy of the U.S. Army)

On the sensor side, the aircraft’s enhancements will include: the addition of near infrared and color capability to the cockpit, providing pilots with high-res videos of targets; the addition of eye-safe lasing capability; blending between day and night sensors; enhanced stability for longer range viewing; and a laser-pointer mounted on the aircraft’s gimbal. (In a nutshell: features will enhance the craft’s situational awareness, enabling pilots to lock on and track targets much faster.) In an early test, the new sensor took a video inside a darkened hangar six miles away (meanwhile, pilots using the existing sensor could only make out shadows).

Considering the chopper’s modernized design will address 80 percent of the legacy failure modes and increase turret reliability by 40 percent, it’s high-time this “unbelievably impressive complement of weaponry” flew into the 21st century.