Frustrated by some of the drawbacks of hysteresis brakes, we designed a new type of magnetic brake. 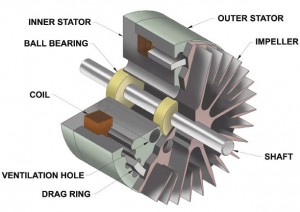 The five drawbacks we found with hysteresis brakes are:

A PC controls the speed and magnetic brake current. The PC runs the brakes through all possible torque and speed ranges for both increasing and decreasing currents in approximately 1% increments. The result is that up to 100,000 current–torque points are measured and then stored in the embedded microcontroller for various speeds up to the maximum allowable speed for that particular brake.

When it is required to send a predetermined torque, the microcontroller interpolates the data points in its memory to determine what current will produce the required torque. The microcontroller continuously senses whether the input signal is increasing or decreasing and thus is able to pick the proper points on the graph (figure 2). Figure 3 shows an actual measurement of torque output as a function of an increasing input signal and a decreasing input signal. 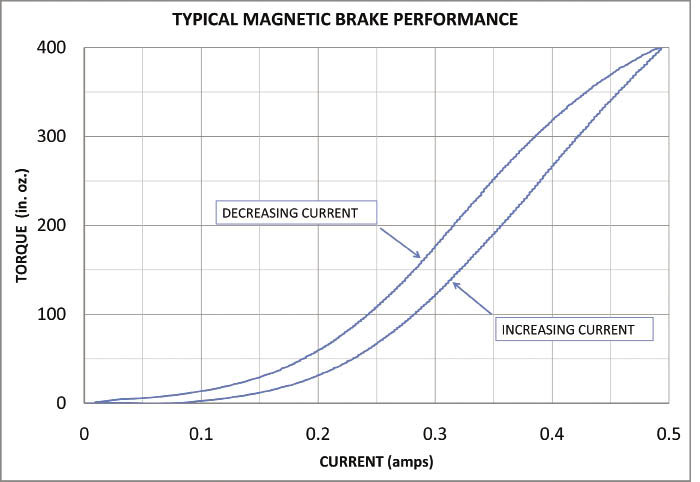 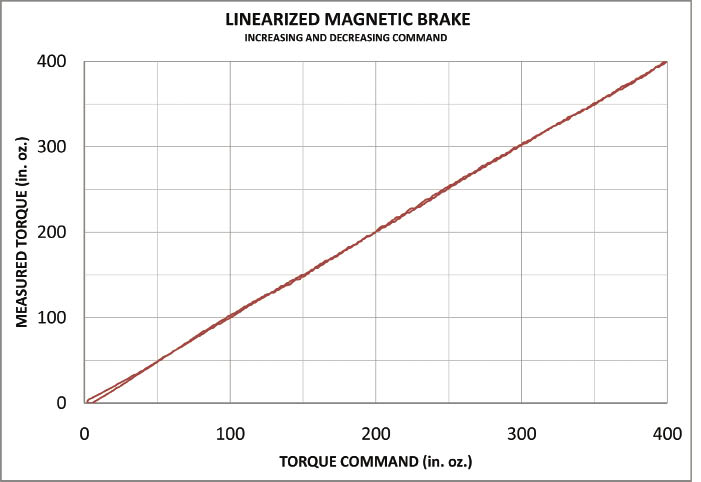 FIGURE 3: Oscilloscope recording showing the torque output for an increasing and decreasing signal. The sawtooth appearance of the graphs is due to the quantization of the input signal.

Based mainly on empirical work and trial and error, we were able to come up with a design that eliminates the residual magnetism by applying a decaying sine wave to the brake coil. The first few cycles of the decaying sine wave will often cause the drag ring to rotate a small amount. This slight movement causes a reduction in de-magnetization. Consequently, the drag ring is locked into position by a voice coil magnet mounted on a leaf spring. This design eliminates all sliding moving components. The entire demagnetization takes less than 500 milliseconds. The remnant magnetic cogging torque is on the order of the ball bearing friction.

Taking advantage of the Eddy current effect
Eddy currents are created in magnetic materials when the material is passed through a magnetic field. Since energy is dissipated in terms of heat, the eddy currents can be used to cause braking in addition to the hysteresis braking. A characteristic of eddy current brakes is that the braking torque is proportional to the speed and is zero at zero speed. This may cause potential problems when the brakes need to be used for constant torque purposes, but is an asset when one needs to have additional braking at higher speeds. Since an embedded microcontroller is already used as an interface to eliminate cogging, hysteresis, and nonlinearities, it is a simple matter to correct the torque as a function of the angular velocity within the applicable speed range of the brake.

To measure the angular velocity of the magnetic brake, one or several small magnets are installed on the periphery of the impeller. A hall-effect sensor detects the time interval between the pulses produced by the magnet(s). It is a trivial matter for the microcontroller to then compute the angular velocity of the brake and correct the torque such that it is independent of speed within the allowable speed range of the brake.

The transient, or short term, heat dissipation is largely a function of the thermal inertia of the drag ring. In many applications, such as decelerating a 3-ft diameter roll of film to a quick stop, very short term high-energy dissipation is essential. As an example, the Magnetic Brake Systems model MB-5.50 with a 4.56-in. drag ring diameter can dissipate 4,700 W, or about 6 hp, for a period of 10 sec, figure 4. 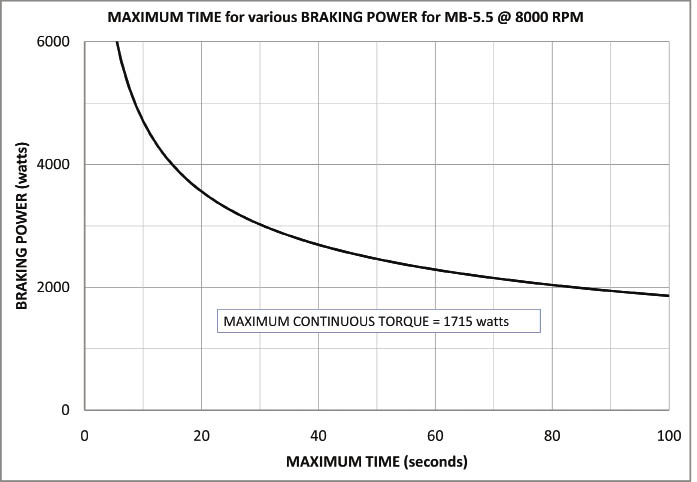 Steady state, or continuous, power dissipation is largely aided by the impeller and ventilation holes shown in figure 1. The impeller, or centrifugal blower, creates a slightly negative pressure at the ventilation holes relative to the ambient pressure. This negative pressure forces airflow through the ventilation holes. The pressure produced by the impeller varies with the square of the angular velocity of the impeller. This phenomenon fortunately works in our favor. It should be remembered that power is a product of torque and angular velocity. Thus, when the brake is running at very low speeds there is essentially no heat being generated; at maximum speed the power is at maximum and the airflow is at the maximum.

In order to obtain maximum power dissipation from a brake it should, either through gears or belts, be geared up to run at maximum allowable speed.

Once you have a microcontroller in the system …
There are many industrial applications where items such as film, wire or cloth are unrolled from a supply roll and the radius of the roll gets smaller, as the element is unwound. Magnetic brakes are great at holding constant torque, but what about holding constant tension with a variable radius roll?

The unwinding tension is a function of the brake torque and the radius. The changes in radius are measured simply by sensing the timing pulses from a second roller in the system, which has a constant radius. The tension is now a function of the ratio of the time between pulses from the fixed radius roll divided by the time from the variable radius roll. As explained above the microprocessor adjusts the brake signal to obtain a constant tension.

Similarly, the tension on the roll being wound can be measured and adjusted.