Some things in life—and music—just won’t go away. In life, we have Kim Jong-un and the IRS. And in music, we have the Beach Boys. Formed in Hawthorne, CA, in 1961, they’re still touring and singing about Daddy taking the T-bird away even as their members contemplate their ninth decade. 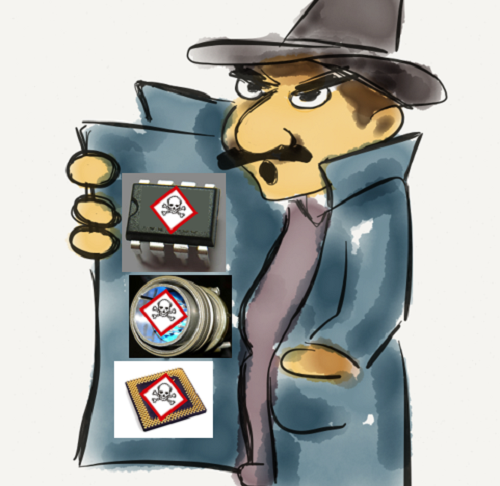 Figure 1: “Psst… I got your parts right here…” Unfortunately, counterfeit components are seldom so easy to identify. (Image Source: mjtc.com/author)

Electronic components aren’t so lucky: many have more in common with a ‘90s boy band (average lifespan seven years) than Mike Love and co. The life of an electronic component follows a well-worn path: introduction, growth, maturity, decline, phase-out, and end of production. Original equipment manufacturers (OEMs) mark the beginning of the end with a product discontinuance notice: research firm IHS estimates that about 4,270 product discontinuance notices will go out in 2017. The number has been steadily increasing over the last decade: causes include changes in technology, the introduction of new regulations such as RoHS, and even natural disasters.

Even with notices of two years or more, a product discontinuance often leaves a customer in a bind, and a network of authorized and non-authorized distributors exists to service the demand for discontinued components. The problem of counterfeit components affects all of them.

Just like the guy selling “genuine” Gucci handbags from the trunk of his car, counterfeiters are trying to trick you into thinking you’re buying legitimate products. The World Semiconductor Council defines counterfeiting as thus: “Semiconductor counterfeiting is considered the act of fraudulently manufacturing, altering, distributing, or offering a product or package that is represented as genuine.”

Although all component types are affected, the most-often targeted types include dynamic memory and programmable logic devices, or higher-priced devices such as microprocessors and microcontrollers. Even connectors aren’t immune—counterfeiters often substitute aluminum for copper, or claim bogus UL compliance.

Unsurprisingly, discontinued components account for around the bulk of the counterfeit activity at 67 percent, but around 19 percent of counterfeits are OEM production parts.

Sometimes counterfeit products are simply empty packages, or packages with the wrong die, or packages without bond wires. These are non-functional and easy to spot, but a more insidious approach is to take functioning parts and alter them in ways that are hard to detect. Examples include new product codes; RoHS markings on noncompliant products; high-performance markings on low-performance products; or automotive- or military-grade designations on commercial-grade parts.

The raw material for such counterfeit parts often begins with electronic recycling programs. According to a 2013 SIA report, a typical “manufacturing process” is:

Such components may pass initial inspection and sample testing. They may not fail until months or years after they’re installed, leading to an increased incidence of field failures, government-mandated recalls, loss of reputation, and even loss of life.

Positively identifying a functional part as a counterfeit is a difficult task, especially since the original manufacturer is often unwilling to release specific data on their products.

ERAI (Naples, FL) can help: it’s an information-services organization that monitors the global electronics supply chain. Among other tools, the company offers a searchable database of high-risk and suspect counterfeit parts, a nonconformance library with photographic of examples of counterfeiting, and a comprehensive list of resources. 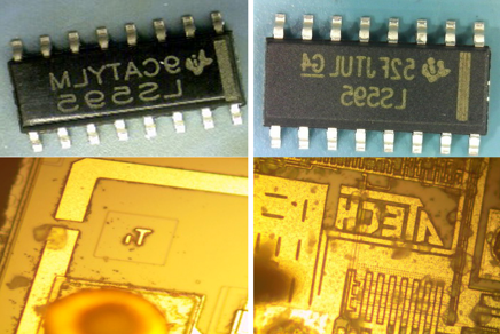 Kristal Snider of ERAI provided me with a couple of counterfeiting examples. The two devices in Figure 2 appeared genuine when they were purchased on the open market, but decapsulation showed that the genuine part had the TI logo and the part number, and the counterfeit version had the “Atech” logo and no part number.

Unless you find such a smoking gun, sometimes the best you can do is to look for inconsistencies. Both parts in Figure 3 were represented as being from the same lot: X-ray inspection revealed differences in internal construction and variations in die size and placement. 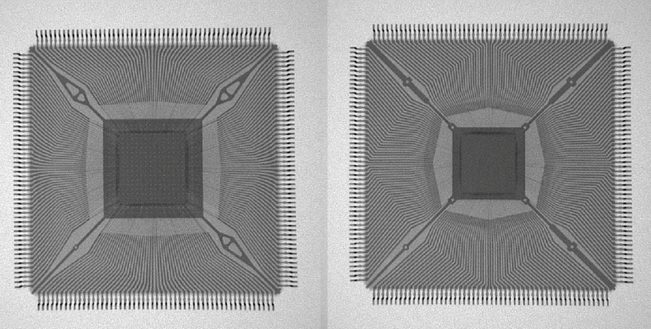 Figure 3: Internal inconsistencies in “identical” parts raise the likelihood of one (or both) being counterfeit. (Image Source: ERAI)

Which one of the parts is counterfeit? It’s hard to tell without a known good part for comparison, but the prudent course of action would be to reject the entire order.

The distribution channel takes counterfeiting very seriously. Every distributor has an anti-counterfeit policy, and many, such as Mouser and Arrow, have published white papers to assist their customers.

As parts of their efforts, Rochester Electronics has even produced a video showing the heroic Captain Rochester springing into action to foil Count OerFitter’s dastardly plans. Boo! Hiss! Something else to blame on Europeans.

If an authorized distributor doesn’t have what you need, the next step might be a non-authorized stocking distributor—a distributor without a legal agreement with the OEM to sell their products.

Non-authorized stocking distributors have acquired components from various channels, including unused excess inventory from other distributors, OEMs, or contract manufacturers. Reputable non-authorized stocking distributors do everything they can to clean their inventory: they operate counterfeit-detection programs, and are certified to standards such as AS9120. However, more caution is required: be sure to verify the certifications, qualifications, and programs. 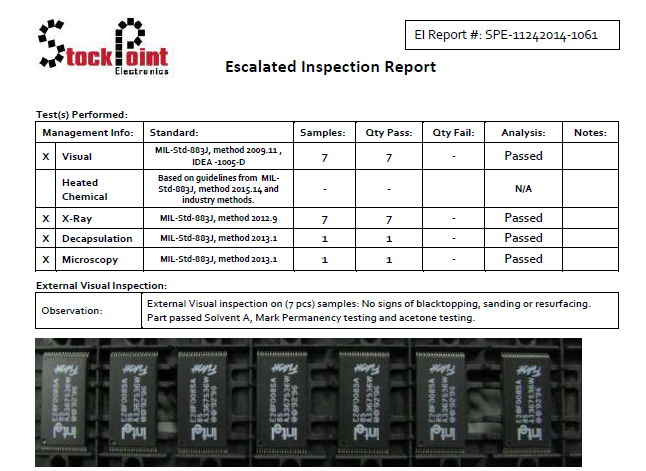 What if conventional distributors (of any stripe) can’t help? If a product is low-volume, or any design change is subject to a lengthy or expensive requalification process, it’s tempting to look for any source for that discontinued component.

Non-authorized dealers, often called brokers, don’t have stock but procure a component from an undisclosed source. They often specialize in hard-to-find parts and ply their trade on web sites such as Alibaba or even E-Bay.

This is the infamous “gray market” and you’re in dangerous territory: utmost care is required. If you’re considering buying from a dealer, do your homework. Ask lots of questions such as:

Getting straight answers might be difficult. Many counterfeit components reach their end customer through a convoluted supply chain: one of the military examples quoted above traveled from the originating source in Shenzhen to a distributor, a subcontractor, and finally the prime contractor before ending up in an aircraft.

With the Chinese government’s apparent reluctance to crack down on domestic manufacturers, it looks like counterfeit components will be around for the foreseeable future. Just like the Beach Boys and the IRS. But hopefully not Kim Jong-un.