Last year, the International Federation of Robotics (IFR) revealed its industrial robot report for 2016. Now, the 2017 numbers have been released—how do the stats compare?

In 2016, there was an average number of 74 installed industrial robots per 10,000 employees in the manufacturing sector. The global average rose to 85 robots in 2017.

In terms of industry, 2017 saw the automotive industry adopt the largest number of robots globally. The electrical/electronic and the metal industries came in second and third, respectively.

When it comes to markets, China supplied 36 percent of the total robots sold two years ago. Its sales volume of 138,000 industrial robots was also larger than the sales of Europe and the Americas combined at 112,400 units.

The IFR labeled Japan as “the world´s number one industrial robot manufacturer” since they delivered 56 percent of the global supply in 2017. And the United States continued its upward trend in robot installations, keeping its seven-year streak as it reached 33,192 units.

“By regions, the average robot density in Europe is 106 units, in the Americas 91, and in Asia 75 units,” according to the IFR. Narrowing the scope even further, IFR lists the highest density of robot workers per country, and South Korea remains the champ with an average of 710 installed industrial robots per 10,000 employees in the manufacturing industry in 2017. This ups its average from 631 robots the previous year.

To get the full 2016 details, head over to last year’s report. To see how 2017’s robot density numbers stacked up, check out the infographic below, courtesy of Statista. 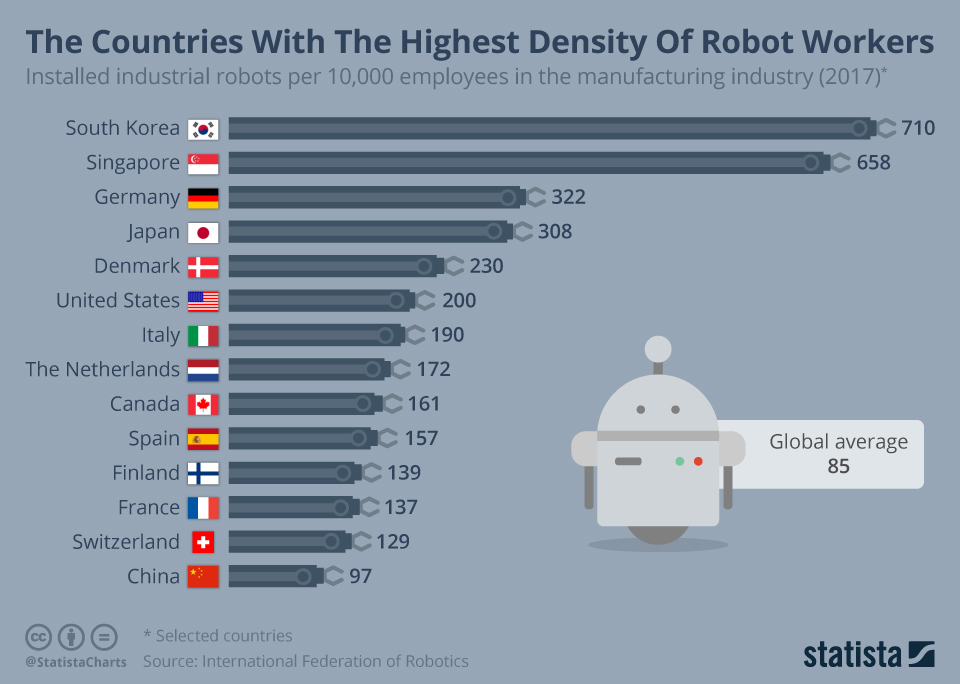 With the increase of robotic employees, are you wondering which jobs are most at risk for the automation takeover? Statista recently shared an infographic based on data from the Bureau of Labor Statistic that listed the professions most under threat.