Jaroslaw Weronko deals with a lot of stress, but he likes it that way. As one of the engineers working on the new GE Catalyst turboprop engine, his job is to make sure that one of the engine’s key components — the high-pressure turbine, which spins at more than 40,000 times per minute — can handle the high temperatures and mammoth mechanical forces inside. “The conditions create crazy stresses,” he says. “I’d say the turbine is the most stressed module of the entire engine.”

GE started testing the engine, formerly known as the Advanced Turboprop, just three months ago, but it already has the aerospace industry atwitter. That’s because the design and the components Weronko and his team have been working on — revolutionary in their own right — will help reduce the GE Catalyst’s fuel burn by as much as 20 percent and give it 10 percent more power compared with engines in its class. “This engine is a game changer,” says Brad Mottier, vice president of GE Aviation’s Business and General Aviation unit, which oversees turboprop development.

The GE Catalyst, for example, will be the first commercial turboprop engine with digital engine controls that will allow pilots to fly planes powered by it like a jet. Another first: More than a third of the engine is 3D printed, which enables GE to combine 855 separate parts into just 12 and shave off more than 100 pounds in weight.

It’s been more than 30 years since the last new commercial turboprop engine design entered service, and developing such an engine from scratch can take as long as a decade. But Weronko and his colleagues were able to power through the design process in just two years by relying on 3D printing and data. 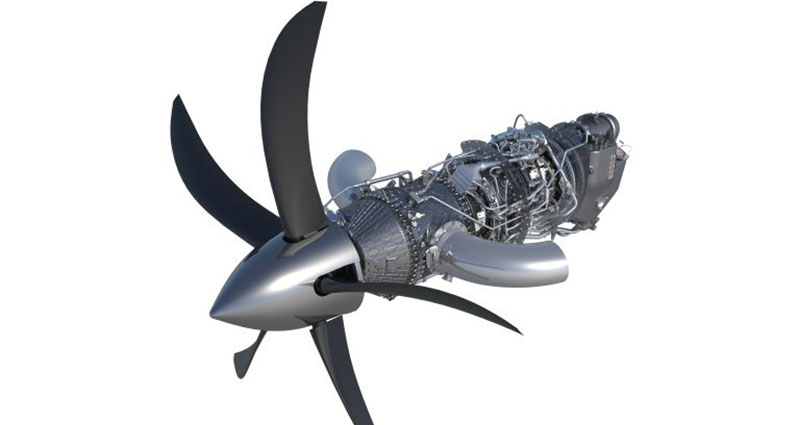 “We live in a digital world and we wanted to use the latest technologies available to us,” says GE’s Weronko. Image credit: Yari Bovalino for GE Reports. Above: The design and the components Weronko and his team have been working on will help reduce the GE Catalyst’s fuel burn by as much as 20 percent and give it 10 percent more power compared with engines in its class. Image credit: GE Aviation.

Weronko, 40 years old, hails from Poland. He joined GE right after he received his doctorate in engineering from the University of Warsaw and has led a nomadic lifestyle ever since. An expert in combustor design, rotating machinery and high-pressure turbine design, he started out in Warsaw at GE Aviation’s Engineering Design Centerand then moved on to work on commercial jet engines in Cincinnati and gas turbines in Greenville, South Carolina. Today, he is based in Turin, Italy, at the engineering headquarters of Avio Aero, the aerospace powerhouse GE Aviation acquired in 2013. “I’ve always enjoyed collaborating with colleagues across borders and oceans,” he says. “It makes you and everyone else stronger. Designing the GE Catalyst in less than two years was a sprint. If I didn’t have a chance to practice and learn from others, I would not succeed.”

For example, working from the center in Warsaw, Poland, and from a plant in Rivalta, Italy, Weronko and his team used the emerging technology to figure out the best way to design the cooling system for the turbine. Typically, designers settle first on the best design and then cast and machine the prototype, which takes time and costs money. But Weronko’s team used 3D printing, which doesn’t require expensive casting molds or specialized machining tools, to make several promising designs, tested them all, and learned from the results to make the final part. Waiting for a casting can take weeks or months, but 3D printing can deliver a prototype in days, supercharging the design process.

“Printed parts enabled us to get close to the real hardware very early in the development phase,” Weronko says, slipping into his engineering argot. “Based on data from testing real components, we could determine whether we have the right flow path design with appropriate cooling holes definition or whether we need to continue design iteration.”

The team leaned heavily on data to fine-tune the GE Catalyst’s design, harvesting and evaluating information about heat, vibration, pressure and other factors from a multitude of sensors they installed on the prototypes. “We live in a digital world and we wanted to use the latest technologies available to us,” Weronko said.

GE can use this system to create a digital twin — a virtual representation of the engine — for each GE Catalyst when it enters service. These twins will help operators predict how much they can use each engine before it needs service. By comparing information from other engines, the twin will also be able to spot small differences in performance — say, in parts from a particular supplier — and suggest a customized maintenance schedule for each engine with parts from the same batch. “Imagine that you are the pilot sitting in the cabin and you understand how the engine operates,” Weronko says. “It’s not anymore ‘OK, I’ve heard something — should I be concerned?’ You know whether you are still within the margin. It gives you confidence.”