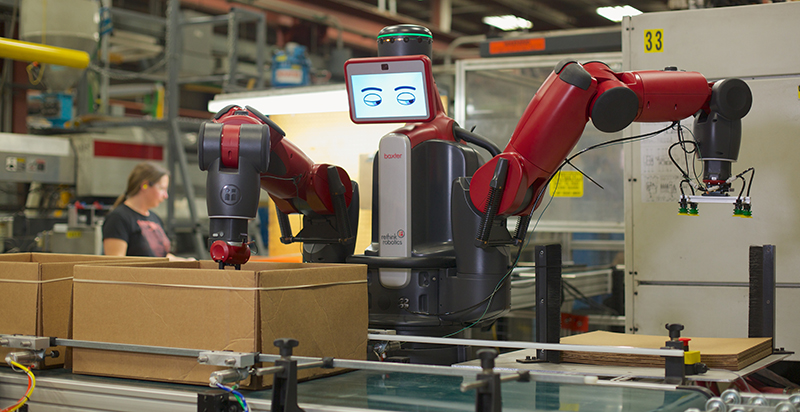 Imagine a world of full of machines manufacturing anything we desire on-demand, where robots attend to workers’ every need. Welcome to the future of advanced manufacturing — a hybrid of technologies and processes that manufactures goods through the use of innovative technologies.

Today, advanced manufacturing accounts for 13 percent of jobs in the U.S. and contributes $3.1 trillion to the economy. As machines become smarter through adaptive sensor networks connected to the Industrial Internet, efficiencies will be created and the economic impact will only grow.

Advanced manufacturing techniques combined with big data analytics will allow companies to make intelligent decisions based on real-time data. This actionable data will lead to faster turnaround times for manufacturing and lower costs.

Here are three industries that are among the biggest beneficiaries of advanced manufacturing:

As society changes, consumer habits change. Last year, we saw an unprecedented demand for electric cars, as electric vehicle sales grew by 60 percent worldwide according to Bloomberg New Energy Finance. As the race for the sub-$30,000 electric car heats up, Tesla is using advanced manufacturing robots at its Fremont plant to keep up with demand.

Tesla’s robots are relieving workers of the most labor-intensive operations in the factory and cutting installation times in half. By freeing up workers to focus on the most crucial aspects of assembling a vehicle, Tesla is creating a smarter, leaner workforce.

By 2040, 35 percent of all new cars sold worldwide are expected have a plug and long-range electric cars will start at less than $22,000. To keep up with the projected demand, electric vehicle manufacturers will have to openly embrace the marriage of software and hardware that is advanced manufacturing.

Robots might not yet be part of everyone’s daily lives, but soon they will be part of the everyday workforce. Sales of industrial robots sold grew by 8 percent worldwide last year, according to the International Federation of Robotics, surpassing 240,000 units sold for the first time.

As industrial robot sales grow, The Boston Consulting Group predicts that a “robotic revolution” is poised to transform many industries — replacing manual labor with machines on a wide scale.

The same is true for automating mundane tasks such as loading and unloading materials from trucks, empowering the workforce to become more productive.

For example, the OTTO is a self-driving vehicle that can transport goods and services throughout an industrial environment. By combining robotics such as the OTTO with a workforce that has advanced manufacturing skills, industrial companies can garner the benefits of improved efficiency.

The global aerospace and defense sector is poised to resume growth following several years of declines, according to Deloitte.

With the return of growth to the sector, aerospace companies will be more open to experimenting with emerging technologies such as nanotechnology.

Boeing used nanotechnology when the company developed the 787 Dreamliner to reduce the overall weight of the aircraft, resulting in longer possible flight times and decreased operating costs.

NASA is researching nanotechnology at NASA Ames Research Center, exploring the technology’s potential to “revolutionize many aspects of space exploration.”

Nanotechnology combined with advanced manufacturing would dramatically improve the process of designing, creating and operating an aircraft through improved efficiencies.

The above are just a few examples of industries that are already benefitting from advanced manufacturing. But nearly every industry around the world can benefit from advanced technologies and systems, which have the potential to make the global workforce smarter and more efficient.

This blog originally appeared on www.gereports.com.