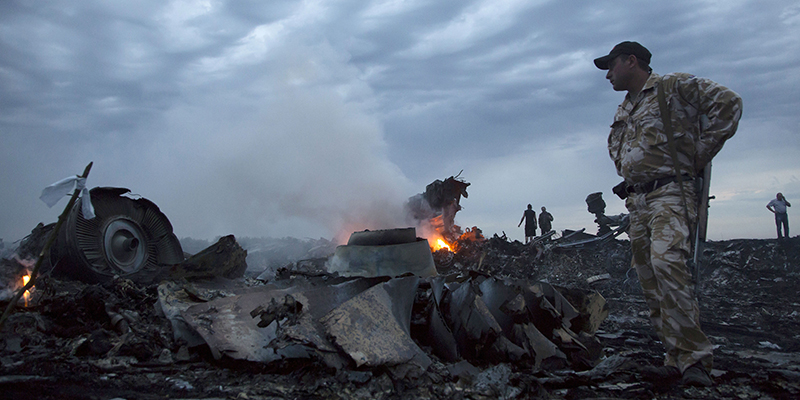 In this July 17, 2014 file photo people walk amongst the debris, at the crash site of a passenger plane near the village of Grabovo, Ukraine. The Dutch Safety Board is publishing its final report Tuesday, Oct. 13, 2015 into what caused Malaysia Airlines Flight 17 to break up high over Eastern Ukraine last year, killing all 298 people on board. (AP Photo/Dmitry Lovetsky, File)

The Dutch Safety Board is publishing its final report Tuesday into what caused Malaysia Airlines Flight 17 to break up high over Eastern Ukraine last year, killing all 298 people on board.

A preliminary report issued last year said the Boeing 777 flying from Amsterdam to Kuala Lumpur likely was hit by multiple “high-energy objects from outside the aircraft,” fueling widespread speculation that it was downed by a surface-to-air missile, likely a Russian SA-11 system known as a Buk.

Western authorities have pointed blame at Russian-backed separatist rebels who were fighting Ukrainian government forces in the area where wreckage plunged to earth on July 17, 2014. Russia has denied that and blamed the Ukrainian forces, who also denied downing the plane.

WHAT WILL TUESDAY’S REPORT SAY?

The report has set out to address four key questions: What caused the crash? Why was the plane — and others — flying over a region in the throes of a violent separatist conflict? Why did it take up to four days for some relatives of the victims to receive official confirmation their loved ones were on the flight? To what extent were passengers and crew aware of what was happening? Investigators also will display a reconstruction of the front section of the plane, pieced together from wreckage recovered from the crash site.

WHAT WILL TUESADAY’S REPORT NOT SAY?

It will not directly address who was responsible. The Dutch Safety Board has repeatedly stressed that its mission is not to apportion blame. So even if, as widely expected, it confirms that the plane was blown out of the sky by a Buk missile, it will not explicitly blame any person or group for firing it.

WILL GRIEVING FAMILIES AND THE PUBLIC EVER GET TO KNOW WHO IS TO BLAME?

A separate international criminal investigation is underway that aims to answer that question. The team, led by Dutch prosecutors, says the theory that the plane was downed by a Buk missile is the most likely scenario, but has added that it has not ruled out other possible causes. In August, prosecutors announced they are investigating several fragments “possibly originating from a Buk” missile system. The possible missile debris was recovered from the crash site in Ukraine. The criminal investigation is expected to continue into next year before reaching its conclusions.

IF SUSPECTS ARE IDENTIFIED, WHERE WILL THEY FACE JUSTICE?

That crucial question remains unanswered. Countries whose citizens were killed, including the Netherlands, Malaysia and Australia, want to set up an international tribunal to prosecute any suspects. Russia vetoed the move earlier this year at the United Nations Security Council. Ukraine’s foreign minister said in July that a fresh attempt would likely be made to establish a tribunal once the final report is published.

WHAT ARE FAMILIES OF VICTIMS EXPECTING?

Silene Fredriksz-Hoogzand, whose son Bryce and his girlfriend Daisy Oehlers were killed, fears the Safety Board conclusions will fall short of providing the definitive answers she wants to hear.

“What I suspect is that they will say: ‘Highly likely this or that.’ For me, that’s not an answer,” she said.